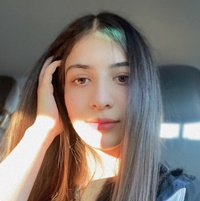 The perfectest of the perfect had little golden coils of sunlight for hair and big, brilliantly aquamarine eyes, dressed in her crisp white uniform and clicking doll shoes. Unlike the fourteen other girls that watched her, she held in one hand a valise and was adorned with a single red ribbon pinned by the collar of her shirt. The red ribbon proclaimed the girl called Esme, or perhaps 11783, the most perfect of the girls at the White Warden Girls’ Home and indicated her final day before she departed to live with her new family in the city, which all the girls longed to see.

The Advancement. I drew in a long breath, waiting, waiting. Waiting for Esme to find her way to the front, with each pace she took seeming to take her twice as far from the Home than the one before. Waiting for the Head Mother to announce their departure, for the carriage to arrive, fascinating and fantastical, and carry Esme away into a world we could only imagine, transcending beyond the stone walls around the orphanage and into the unknown. Waiting and waiting until the next Advancement came, and the next, waiting until a dream arrived where I was the girl with the red ribbon, perfect.

“We are to leave now, Esme,” the House Mother spoke. “Ensure that you have all that you need before our departure.”

Esme nodded, looking up at the home as if bidding it farewell one last time before it would be forgotten forever. Her eyes never met those of the other girls, a gaze almost divine, that could not be tainted by such sights. She was part of a new world now, enlightened, gifted the sight of a third eye. She was no longer of the House, but of the beyond. I watched her, unable to take my eyes away. It was a trance of something of an envious admiration, and more than that, a need. She couldn’t see it, but I knew she must’ve felt it, such intent. Yet she didn’t for a moment wavered, her eyes never so much as drifting towards the girls.

As the sunrise scorched the grasses, the girls all awakened at once, their feet touching the ground beside their beds in the unison of a single timed sound. Each one tied their hair into a neat rosette upon the top of their heads, their white blouses bright and clean for the new day. After the Advancement, all went on as it should, no different than the days that had come before and the days which would follow. No one spoke of Esme, nor of nothing more than the light exchange of what was proper. Brushing off my skirts, I lined up alongside the girls for the first class, keeping my poise straight and mannerly. Beside me stood Charlene, and on the opposite side was Pheobe. They always did, being 11753 and 11792, where 11767 belonged right in between. It was where we were meant to be, in the order of the little inked numbers etched into the skin by our hearts. Beneath the surface, that was what we were, the codes of our actions, our thoughts, our beliefs, our very selves.

Three sharp taps of wood against wood summoned our attention as the Head Mother entered.

“Girls, girls,” her voice resounded across the room. “Find your places, open your books. We haven’t the time for lingering, you’ve duties to tend to.” The Mother paced the room, examining us one by one.

I opened the volume, not a moment off from the rest of the girls, locating the page with a single movement. My eyes drifted to follow the light which poured like milk from the windows across the paper before me, finding the wide windows from which the woods were visible. I couldn’t help but think of Esme. The girls had all grown up in the orphanage together, every one of us. I wondered if I would ever make it to wherever was beyond the towering trees and stone walls. It was a dangerously sweet thought, to be perfect and be the good girl who would wear the little red pin upon her breast while everyone watched her disappear into the beautiful world which awaited her. The bliss was ephemeral, fleeting. When the feeling was cruelly pulled away from me I sunk into reality once again, crescent moons indenting my palms, the brand of desperation.

Her eyes were cold. “What is this?”

“I apologize, Madam.” Stunned, I dared not move or meet her eyes. I tasted bile at the back of my throat, disgusted at myself. For a moment, the Mother was silent. Slowly, she leaned forward so that her head was nearly in line with mine, and looked across the room to where my attention had been. I held my breath. The Head Mother’s eyes found their way back to me and gazing down at my hands, she rose back up and walked away without a word. My heart thrummed like war drums in my ears, holding me still in my place. I dared for a moment to wonder if it had been a recognition, an approval I felt in her gaze just before she departed.

Recovery took a moment of breathing, and I kept my eyes locked on the text of the book. The pictures showed what we could be, with porcelain smooth skin and rosy cheeks, with nimble fingers and quick mind, with the worthiness of a wife, a daughter, a mother. The White Warden Girls’ Home wasn’t like other orphanages, every girl knew that. Only the best came from The White Warden Girls’ Home.

Only moments later, the House Mother stopped again. I feared for a moment that she was beside me once again, but quickly noticed her looming presence over Charlene.

“Absolutely unacceptable!” The cry ripped through the room. “Absolutely ludicrous. Absolutely, most definitely, unladylike.” The House Mother pointed her pointing stick at Charlene, who sat unmovingly. Her posture was unlike the others’, who crossed their ankles and held their knees near, with a grace akin to a swan’s. “You think this is alright? No one,” she turned to speak to the room. “No one who cannot so much as stay seated properly can ever be deemed worthy. Conformance, discipline, propriety, and above all, perfection. Say it, breathe it, live it, become it,” she instructed. “Without it, there is nothing. No order, no society.” Her words lingered with a weight, a power. I curled my fingers as if I could grasp them, to finally, finally become perfect simply by letting the words spill into me like an ocean. Silence took the room.

I had known Charlene since forever. I knew how she knew the stars scattering the sky better than those in the form of freckles upon her cheeks. I knew how she breathed in poems like words sung into the air, how she always wanted to know everything about anything. I knew how familiar she was. Now, she spoke, so simply, so short, so cryptic and strange. It scared me, the idea that someone could think in such a way, such notions so distant from my reach. We were to be like one, one flawless color that was beautiful and everywhere. A new color was impossible to even imagine, to try and think of for even a moment. I found myself holding my breath almost as to keep herself separate from this girl that was now so stranger and foreign. A shock froze the room.

The next morning, the girls all awakened at once, and the unison of their feet touching the ground beside their beds was a little quieter, a quiet almost unnoticeable if it weren’t so loud.

Twenty-seven days of routine, all the same but gradually more perfect than the one before, passed as the new Advancement approached. The night was dark and the new moon hid in the clear sky absent of stars. The quivering of the trees seemed to shush the woods and its secrets to sleep through the wind. I lay with eyes wide open on my bed which felt cold and hard. I wondered if the nights in the city were filled with luminance and the song of people. Gasping with sudden amazement at the thought of it, I held myself tight. As if summoned from my reveries, a light passed through the room like a blade through the dark.

I was the perfectest of the perfect, dressed in my crisp white uniform and clicking doll shoes. Unlike the fourteen other girls that watched, I was adorned with a single red ribbon pinned by the collar of my shirt. I could feel the gazes of the other girls, their sharp, piercing envy in each one. I couldn’t meet their eyes, fear clutching her heart that if I did, they would see through to the truth.

I wasn’t sure what the truth was either. It was like a dream which felt like a memory, something I couldn’t quite remember, something I could never ever forget. I knew the feelings; the cold metal resting in my hand, the girl whose face I no longer knew except as that of a traitor, the faraway song that sounded like salt dripping down cheeks, the stars which rained and rained and rained. My body replayed the senses, again and again, and yet couldn’t quite put them together, a haunting. If I met the girls’ eyes, would they feel it too? Would they see me, and through me those who came before?

The fragile mask I held, my saccharine smile and elegant composure, threatened to shatter at the slightest tip. My knuckles turned white as I gripped her valise, willing myself to silence it all, to rid the flashing lights and coldness crawling up her skin. The Head Mother cleared her throat. “We are to leave now, Alvah.”

The red ribbon shone bright. I could not think of Charlene, the other girls, the new infant who had arrived to complete fifteen. I licked my dry lips, hands shaking. Closing my eyes, I blocked it away. The crimson, rose, scarlet, ruby, wine, blood, red, red, red. Conformance, discipline, propriety, and above all, perfection.

Zeyneb Kaya is a student who sees writing as a way to challenge our views and share new perspectives and stories. She enjoys looking at language in new ways, and also explores computational ways of working with it, too.