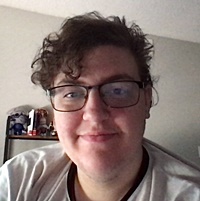 “I can’t believe they got a pastor to come speak at my damn funeral,” I said, “Saying shit about how this was an unfortunate event… Yeah, makes it sound like it was an accident. Such B.S.” I lean back and groan, I stare at the ceiling as a man from a religion I didn’t believe in, talks me up and say how I’m in a better place now. I can’t help but scoff from my place in the back row of the audience. I turn to my fellow unintentional guest, and say, “How little he knows, right?” I elbow the hooded figure next to me.

It sat still; I assume watching the pastor talk. After a few more seconds it slightly turns its hood towards me. It spoke in a monotone, unnaturally deep voice, “What would you rather have?”

My next few words felt as if they were choked out of me, “I don’t know… the truth? Not… this. Not some fucking pity party for my family.” I gesture towards the silent crowd and the speaking pastor, with shaky hands.

“The truth…” it said as it tilted its hood, “What a vague answer, for something you seem to desire so directly. What is the truth?”

My mind was initially blank, I lean forward. I can feel a familiar tension in my eyes. “That all the issues I had were because of them. The truth is that they… held my hand… And lead me… to my own death.” as I gazed into the hooded void waiting for any reaction or gratification. I know that I truly believed these words the night I died, I had felt I could stand behind and prove them, but right now…
“How hollow…” it said, dragging me out of my thoughts. It then stood up. “Shall we peruse the rest of the ceremony?” My feet followed it over to a presentation board set up on a nice little tripod stand. There were a few of them placed around the open room, each with its own set of pictures from what I could tell.
One picture was me in a suit, next to a couple of old friends. “This, was from my prom night… I only remember hating every second of it. I went with my friends, and they went off to do something else while I was just left alone. I started to have a panic attack and called my mom, she picked me up… being able to talk to her privately… made that night worth it.” I was entranced by the prom photo, that memory flooding my head.

The next photo was a picture of me when I was a child, with our old beagle, Shiloh, I was once again losing myself in this picture, going back to a moment that happened shortly after this photo was taken; “My dad mentioned that he could never replace Shiloh and that he didn’t want to put me through this again. As a kid, I just got upset that we could never get another one,” I said, the words slowly pouring out of my mouth.
“Interesting…” The hooded figure said, “how you only can remember the negativity, the positivity left behind, thrown away, to take on more baggage…”

I flinched at the statement, I turned to my enigmatic partner. “A-are you judging me? I killed myself, and you are judging me! What the hell do you know?” My hands clenched into fists as my whole body felt tense as I shouted at the hood.

It sat still. “It was an observation,” it spoke, “Have you ever spoken with your family? From what you just shared with me; your parents seemed to have at least attempted to help you. More than what many get.”

“Shut up!” I shouted again, “A couple good moments with them doesn’t mean my life wasn’t difficult!” I shoved the board over, the flowers and pictures sprawling all over the ground. I fall to my knees looking over the mess I created, my eyes felt tense again, my breathing becoming rapid and disjointed.

“You are right, but if we go to every other board here, you will remember more.” It said as it continued to watch me. “You are addicted to your pain. You revel in the fact that you hate yourself and your family.”

“What-” I say interrupting it my eyes wide. But I could only let my head hang down, I can’t look at it anymore.

“You aren’t special,” it continues to speak as it kneels next to me. “The world, your family, they aren’t out to get you. Why would they, they are just trying to get through life as you are. You got so enveloped in your own selfish pity party… you lost sight of what reality is.”

I whimper my words out, “Please… stop.”

It continued in its monotone voice, “you are doing this out of spite. You no longer want to get better. It is easier to hate yourself and blame everyone else than to take responsibility and try to improve.”

I fall onto the floor, my chest flattening a flower, my face looking across the floor. I can barely bring myself to mutter, “I… know… but what else am I supposed to be at this point? What am I without it?” The tension growing behind my eyes.

The hooded figure stood over me. “That will be up to you.”

I woke up to my chest vibrating in a rhythmic pattern, my mouth tasting sour and burned like bile. I attempted to pry my eyes open, feeling like the commands to my body are incredibly delayed as my brain throbbed in my skull. I opened my eyes to a blurry tie floor, pills and vomit sprawled around me. I managed to peel my face off the floor and sit on my knees. I look to the vibrating device on my floor with the words “Mom” glowing, I shakily pick it up and answer.

Tawney Mesick is a non-binary (They/Them) that is aspiring to leave an impact and inspire others with their stories. They grew up in Niagara Falls, New York, but has been living in Apopka, Florida, for the last ten years of their life. Follow them on Twitter @TawneyStyle.