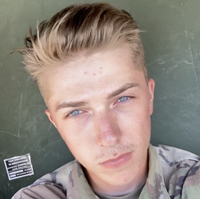 I hummed to the tune of a song stuck in my head that I just couldn’t remember while preparing for the party.

“Jess, can you come here for a second,” said my mom. Her voice always seemed to be followed by bad news.

I drudged out of the bathroom and into the living room where she stood by the door in her blue scrubs.

“Jess, I got called into work so you will have to watch Katie tonight,” she said.

“What? Mom, you know I’m going to a party tonight. I can’t watch her,” I said. I let out an angry sigh and crossed my arms waiting for her response.

“Jess, you’re twenty-two and Katie is fourteen. I have no one else to watch her and I have to work. Plus, you know how much she wants to spend time with you.”

“Maybe take her with you. Introduce her to some of your friends. She would love that.”

“Yea whatever, Mom,” I said as I about faced and headed back to Katie’s room. She was sitting at her desk drawing, like she always was, more meaningless pictures to hang on the fridge.

“Kate, grab your stuff. Mom says I have to watch you and I’m not missing my party, so you have to come,” I said.

“Really, I get to go with you… awesome!” she said. She had a glimmer in her eye that almost made me forget how much she annoyed me.

We walked into the house, and I saw Brad leaning against the kitchen counter chatting up a girl who is way out of his league. I walked over to him with Kate attached to my hip like a human sized fanny pack.

“Hey, stupid,” he rebutted with the familiar grim overtaking his face. “You guys ready to party?”

“I am, she isn’t though. I am just babysitting her for my mom tonight.”

“Oh, come on don’t be a downer! Everyone can have a good time.” He said as he turned around and pulled something new out of the black backpack that followed him like a conjoined twin. It was a pill, but not one I have seen before. “Wait until you try this! It’s brand new and I’m not even entirely sure what it is. All I know is it’s killer.”

“Why would I take that if you don’t even know what it is?”

“Because you trust me, and you love me, and you do anything I say,” he said. The worst part is he wasn’t wrong. Brad and I have been dating or friends since high school even though at the time I was a freshman, and he was a senior. He has a mean side to him but he’s fun and my mom hates him so that is reason enough to keep him around.

“Ok, fine, I’ll try it, but Kate isn’t doing anything,” I said. Taking the pill from his hand and confidently swallowing it followed by a shot of whatever was in the red cup on the counter. Not even fifteen seconds later the world was spinning, and my vision was getting blurry.

“You… like… it?” Brad said in a distorted voice. I could barely make out the words. Even so I gave a knob of affirmation and sat down clinging to the kitchen bar for stability. The last thing I remember seeing was Brad handing Kate a pill as well.
No… wait…

The sunlight blinded me even through the cheap curtains. What the fuck did he give me, I thought as scanned the room to collect my surroundings. That’s when I saw her… Kate was on the couch asleep. She looked like an angel. A stupid, annoying, overly attached angel. I stumbled over to her and gave her a nudge.

“Wakey wakey, Princess, time to go,” I said. She didn’t respond. “Kate, get up, we need to leave.” Followed by an even harder shove. “Kate…? Kate!” Now shaking her and realizing something is wrong. “Kate, wake up this isn’t funny!”

“What’s going on?” said Brad as he stretches like a dog doing that shaking thing people do when the stretch is really good.

Brad approached me from behind. “Here let me.” He gave her a nudge as well but almost instantly his face went pale. “Uh, Jess, I uh… I think she’s dead.”

“No, get out of my way she’s fine. She is just sleeping. Kate, I need to wake up now. I’m serious Katie… wake up,” I said as I could feel the engines in my tear ducts hum to life. This can’t be happening. I turn to Brad with a glaze of sadness preparing to break like an old dam. My emotions quickly turn from sad to angry. “You did this…”

“I saw you give her that pill before I passed out. You killed my sister!” I lunged at him banging on his chest as hard as I could. We fought an argued. Eventually he got the best of me despite my angry strength.

“Jess, you need to calm down. We can get through this. You didn’t even like her anyway.”

“Didn’t like her? That’s my fucking sister Brad! I need to call the police. They will know what to do.”

“I can’t let you do that Jess. I’ll go back to jail and probably to prison,” he said as he restrained me.

I pushed him off and ran for my phone but didn’t make it before he caught me in the kitchen. I grabbed a knife off the counter in front of me and blindly swung. I felt little resistance as it entered Brad’s neck and he toppled over to the side.

“You did this… you did this…” I found myself repeating as I slid down the counter next to him. Then I heard a faint coughing coming from the living room. Bursting through the door I saw Katie slowly sitting up on the couch.

“Nothing,” I whimpered as I turned to see Brad’s lifeless corpse behind me. As I turned back, I was greeted by Katie, who now was standing next to me in shock from the scene in the kitchen.

She was met with silence as I tugged her back in the living room and pulled her down onto the couch with me. I pulled out my phone and called the police, figuring they would understand, not knowing what else to do. It was then that the blood from the kitchen began to creep under the door and into the living room.

The faint sound of sirens filled the silence.

Dylan Price is a US Army veteran originally from North Carolina and currently Living in Florida. Follow him on twitter at @onedprice