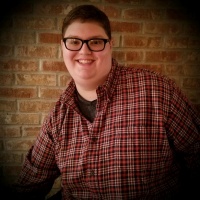 It began like how it always does for Xavier Back, with the sound of loud, heavy, shallow breathing. The tunnel-visioning that blackened his sight. This was one of his famous panic attacks. Where he freezes in place and turns into a nervous wreck.

“Oh god,” Xavier mumbled. He could feel the hot sweat releasing his from his neck, causing a tingling sensation. And the sounds of the cars going across the city street that assaulted Xavier’s ears were not helping the matter.

And where is Xavier at, and what could possibly be causing him to suffer this anxiety fueled freakout?

Well, right now, Xavier is in Celina, Ohio. Not his hometown, but the place he moved to after graduating from his college and scoring his first full-time job. And where in Celina was Xavier at? That would be the place where the smell and stench of popcorn assault your nostrils’ senses just by being 50 feet of the place, where lightbulbs flickered. The local movie theatre.

He stood at the front doors of the place, unable to move. However, the strangest part was the bouquet of roses in his hand.
These roses are for the girl that Xavier had been smitten by. A one Kimiko Kalakaua. A Japanese-Hawaiian woman who worked at the movie theater.

The relationship between Xavier and Kimiko felt simple and natural. Kimiko, like Xavier had moved to Celina herself. And both had similar motivations for doing so. They wanted to be their own people and survive without their families. Though, Xavier did not have to move across the country, like how Kimiko did. The two met when Xavier got off work at the courthouse, which was across the street from the theater, to see a movie. The two struck up a casual chat when Kimiko had taken notice of Xavier more business-oriented clothing (a stuffy, stiff, rough polo shirt and khaki pants that hugged his waist so hard, the touch felt like a vice).

From there, the two would chat each other up, with Xavier buying tickets to showings of movies that he’s already seen before just to talk to her in the lobby while others watched their movies. The two had a lot in common. They both loved anime, they loved seafood, and both liked watching reality tv shows, like Big Brother and Survivor. But what gave Xavier so much interest in Kimiko?

How she was everything Xavier wished himself to be.

He remembered vividly the time Kimiko had gotten to the theatre early one day, and she had decided to give Xavier a visit…A very brazen visit. Just waltz right into the courthouse and entered his office. She smirked and asked the clearly surprised Xavier how he was doing before sliding into a chair and kicking her feet up on his desk.

So confident, so carefree, and friendly. Everything was not.

Xavier had thought it was time for him to take the next step and ask her out on a date. Hence the roses. The problem, though?

Xavier Back was known for being a neurotic mess. He was shy, timid, but ultimately kindhearted. He has a very tough time going through adversity. Like asking a woman out on a date.

Thankfully, Kimiko was too busy with her co-workers and working the snack machines to notice bumbling Xavier standing at the front door like an idiot. Which Xavier took advantage of by walking away from the door and began heading for the corner of the building. He inhaled a shaky breath, where he got a taste of the aroma from the flowers still in his hands.

“This was a terrible, stupid idea,” Xavier sputtered out, teeth chattering, sounding like clams from Spongebob Squarepants.

Every time Xavier was faced with a tough challenge, bad things from his past would come back to haunt him in his head.

“Why is it that every time you show up, this family gets so dysfunctional?” That was from a few years ago. A very hurtful sentence that came from Xavier’s brother, who claimed that Xavier’s presence caused his entire family to begin squabbling.

“Why do you always make trouble for everyone?” Said Mrs. Schwartz, Xavier’s old aid he had in school, who didn’t like Xavier.

Despite that, Xavier couldn’t ever help but wonder if she was right, and—“No,” Xavier said. “No more. No more cowering like a nitwit.

No more letting what other people say hurt you so much. This is between me and Kimiko. And you aren’t going to let these words, or yourself stop you from doing this.”

And despite talking and babbling to himself like a crazy lunatic, Xavier steeled his nerves, took a long, deep breath, and marched out from the corner to ask his important question to Kimiko.