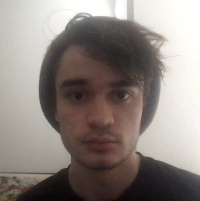 A dark light emerges from the endless nothingness that is death. “What the hell is going on?” asked Clifford. As the dark light dissipated Clifford found himself sitting down in a white chair at a white table in a white room with white walls and a white door.

“Hello, is anyone there?” Clifford called out.

The white door opens and a well-dressed man, from his shiny shoes to perfectly straightened bow tie, walks out and pulls the seat across from Clifford making room for himself to sit down.

“Hi there, my name Nigel I’ll be filing your paperwork today,” Nigel said and pulled out some forms and a pen that had Things get better written on the side of it.

“What’s going on…where am I… how did I get here?” Clifford asked.

“So, this might be a little difficult for you to process but you’re dead,” Nigel said, clicking the pen and handing it to Clifford.

“What do you mean I’m dead… how did I die?” Clifford asked.

“Due to violent or traumatic deaths we keep the details of the incident private to help the easement of our clientele,” Nigel said with a smile as he pushed the forms across the table. “So, you are going to just sign right at the bottom for me confirming you are Clifford Wagner,” Nigel said.

“A traumatic death… are you trying to tell me I was murdered,” Clifford said.

“It would appear so but sadly that is all I can disclose to you at this time,” Nigel said, interlocking his fingers together.

“So, you’re telling me I was murdered, and I’m not allowed to know who or why,” Clifford said clenching his fist on the table.

“I understand this must be difficult for you,” Nigel said.

“I need to see my family,” Clifford said as he tossed the paperwork aside. He kicked his chair back and took off running to the white door.

Clifford ran down a long white hallway with identical rooms to the one he had just escaped from. He ran. Eventually, he came across a lonely wooden door with a crooked sign above it that spelled Live Room. Nigel called to him to come back so he swiftly opened the wooden door and entered locking the door behind him.

“This is crazy,” Clifford said under his breath then a formular voice came echoing from the dark abyss laid out in front of him. A woman sobbing in a chair in a corner slowly came into view. As Clifford got closer the picture it became clearer; the sobbing woman was his mother.

“Who would do this to my boy?” Helen bellowed.

As Clifford got closer to his mother more and more people started to fall into the frame until soon, he found himself standing in the middle of his own funeral service.

“Mom, it’s okay I’m right here,” Clifford said as he reached out for his mother, but when he put his hand on her shoulder, he went right through her. Clifford glared at his hand in shock and then tried to get other people’s attention.

“Hey, I’m right here, see I’m alive!” Clifford shouted but no one could hear him.

A priest in long black and white rob wandered up to the casket where Clifford’s body lay.

“I think we are ready to get started now,” the priest said as he began the service.

“Hey, don’t start yet. I’m not dead. I’m right here!” Clifford shouted into the priest’s face and yet again there was no response.

Clifford looked down in horror into the casket to see himself lying there almost peacefully sleeping in a well-cut black suit.

“Oh my god, I’m really dead,” Clifford said as he almost falls to the ground in sheer panic. Clifford, with nothing left to do, ran for the exit. He almost made it to the door when a man in a sharp black suit with a gray vest with scarlet buttons paved perfectly in a line down his chest walked in.

“Tony, you came,” Clifford said now with a bit of a smile on his face.

Tony walked with confidence, but there was pain left behind in every footprint his shiny black shoe created in the carpet. Clifford followed his brother back into the service and took witness to his brother holding their mother in there crying fit.

Clifford stands in a room filled with grief unable to move. When a hand grasp on to Clifford’s shoulder.

“Tears the water of caring, love, and loss,” Nigel said walking from behind Clifford.

“I had no idea so many people cared,” Clifford said wiping a tear from his eye.

“The human condition life after death it’s a hard thing to watch which is why I didn’t want you running off by yourself. We don’t want any of our clients getting hurt through this process of moving on,” Nigel said.

Clifford turns and hugs Nigel crying into his nice white silk shirt. Nigel stands there holding Clifford in the middle of room of people with nothing left but to move on and keep living.

Alexander Bondulich hails from a small town in New Jersey. He’s a dyslexic storyteller who just wants to share his stories and raise awareness about those with similar difficulties. You can follow him on Instagram @Disorderlycomicx.