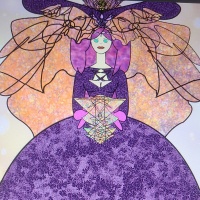 The Ferris wheel on which we sat just reached the top, jerked, and froze as if it was confused too. As if hearing my heart breaking the cloudy sky let out a roar; a storm was coming. The once bright and jovial fair with carnival-themed music faded to grey and the world closed itself off.

“What do you mean it’s over,” I whimpered hoping I misheard.

“Us…. This…all of this. I love someone else, I’m sorry,” he said exasperated, running his hand through his now mop hair.” You must be kidding me, come on. Why did it stop,” he muttered, looking down trying to figure out the reason we stopped moving.

The sky decided at that point it had enough just like me and let the tears rage down. The hinges of our cart squeaked whining at this unforeseen event. The wind whipped the salty bitter raindrops in my mouth.

The rain came down harder.

“Not after all this time. Why now?” I said close to hysterics, my voice foreign even to my ears. I shifted my weight making the hinges squeak.

“Do we have to talk about this? Why can’t you just leave it alone,” he yelled.

The cart below us shifted as if they didn’t even want to hear this conversation.

“Can I at least know who she is, or is that too much to ask for?”

“It’s Micheal,” he said softly as if scared I would break. How could they, Micheal was my best friend since childhood surely, she wouldn’t go for him.

“No, you’re not serious right,” I exclaim. “She wouldn’t date you, she’s my best friend,” doubt fringing my voice as the lighting flashed as if to signal that I don’t want to know, and the voices below shouted as if in agreement.

“I’ve already talked to her. She told me that if we broke up, she and I would get together. She’s liked me since she was introduced, apparently, and I was too stupid to notice.” He claimed unashamedly.

That’s when everything clicked into place. Every outing we went on that wasn’t designated as a date she was always there next to them on his side, not hers. How had I not pieced together their comments and actions till now? How can I lose them both at the same time? How can the world shatter more around me? The wind pulled me into its embrace as if to tell me it was okay, and my heart lightened just a bit. As if the world was telling me that it would be alright, the rain stopped, and the sun poked through and kissed my cheek. The Ferris wheel squeaked and jerked and started moving again saying that it is better to move on and not dwell.

As we finally got off the Ferris wheel drenched and shivering slightly, I walked away never looking back for I knew if I did, I would break all over again. “I can do this. I’m strong. I won’t let them fully break me.” I said struggling to hold my head up high with the tears slowly spilling through. I trudge through the mud and fog all the way home with the sun playing peak-a-boo to check on me. I stopped at an ice cream stand on my way out to allow the creamy delicious dark chocolate to calm my aching heart. I continued walking the tears slowly stopping the fog from lifting as I neared the steps. My mom came out saw my face and knew and rushed to scoop me in her arms. It was then I knew it would all be okay.

Stars Galaxyfire is a new writer who enjoys writing fantasy. When not writing she is either drawing, taking nature pictures, or working on her degree.