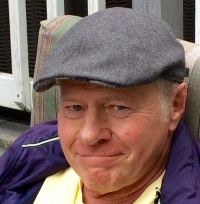 As the two old widows were starting up South Pearl Street a sharp sudden wind hit them full in the face. It had decided to gust on cue just as they were turning. They were bundled in overcoats and scarves, and their feet were warmed by dirty white socks. Their hands were painfully gnarred, their faces pinched and withered. One stood up straight in the pall of the bluster but the second was more naturally stooped and haggard. Neither was steady on her feet but the one forward was more assertive, more obviously determined.

“God damn it you,” Gretchen standing up straight said to the other; she had caught sight of her sister Mable’s face for the first time since turning. “Sweet Jesus of Nazareth” She continued and pinched her sister behind the ear. Mable, in the middle of a mumble, shuffled a little.

“Put that tongue back in your mouth,” Gretchen’s voice fluttered. “You silly old fool.” But these words were softer. She patted her sister on the cheek and laughed. “No one wants to see that thing wandering all over your face.” She laughed again. “Someone might jump out and take a picture.

Obediently Mable pulled her tongue back in. There was no resentment. Actually, she liked the attention; it was an amusement. She popped her tongue back in her mouth like a reverse jack-in-the-box or a lizard who had just caught a fly. From her mind’s eye, this was … nothing in particular. Imagination had made her an eight-year-old girl again and she was eating ice cream; instinctively the tip of her tongue had been rooting out the cherries in the cherry vanilla.

Gretchen girded herself. These “merrilies” might run on forever. Both sisters had sung this song at Corpus Christy Catholic Grade school. That was beginning in…1st Grade. Sister Theresa had instructed them to line up their chairs side by side in rows, like in row boats, two columns to a boat; then they rowed the boat with imaginary ores, and this was done while they were singing.
Now the straight one, Gretchen, muttered under her breath and pressed forward. Her task here was to re-certify them for Medicaid, Food Stamps….and all that jazz. Aggravation, like a wrung-out washcloth, wheezed in her chest; she could feel the wringing.
Food still had to be cooked. Sponge bathing her sister Mable was necessary. And the bed had to be made. God, there was plenty of reason to hurry.

The door to the Albany County Offices was only a few feet in front of them. Gretchen wondered if they might arrive without any further songs or fantasies. She doubted it. A crawling smile pushed across her lips. Mental images quickly formed…a silent movie film of past scoldings flickered.

But before Mabel could start skipping down the silent summer lane now in front of her, before she could start picking the beautiful blue flowers by the road waving slowly, both sisters fell in the door of the Government County Offices as if through the gulp of an open manhole cover. It certainly was a relief -at least as far as the wind was concerned- to be inside this building.
At the front desk, a young woman wearing a polyester pants suit spoke with them. There was some unavoidable confusion.

“Is that your married name on the card?”

Gretchen produced Mable’s card. Grape jelly had stained the edge of it and Mable’s wallet was sticky and twisted.

“We were both called Rossi before and after we married a Rossi.” Gretchen smiled. She had left out the brothers they had married.

This woman now gave them both a long knowing look. She, the critic, knew sleazy,.She knew the smell of it; she felt the ease of its failure.

“Have you completed the questions?”

“Sure”. Gretchen handed her some forms.

The woman squinted like Gretchen’s writing was somehow inferior.

The woman got up and left without notice. A long dark thread trailed from the seam in the back of her jacket; a gray sheen flashed from the material covering her elbows. The wrinkled fabric behind her knees winked alternately. Lumbering away with unsteady effort she appeared in some private struggle. Gretchen exhaled slowly …just like the rest of us, she thought, marooned and desolate. Life in this place, for everyone, was running out of power.

“You’ll hear in the mail,” the woman said with practiced finality. She had long since anticipated and was in fact now staring out the window.

Coming down the stairs it was dark and Gretchen couldn’t see Mable’s face, arms, legs, or body even. The scraping sound of her descending progress was all that existed. When Mable reached the lobby though, and started out the door, the scraping continued. Gretchen listen and thought for a moment. She smiled. Her mind focused on the feel and the direction of the noise. It was her own feet that were doing the scraping. What a caution.

Well, Gretchen decided, at least for the moment she didn’t have to put up with the flowers and the ice cream; she could avoid the talk about imaginary friends, and their dead -supposedly living- relatives. They were all dead weren’t they? But any way, at night, of course there would be the bedtime stories; Mable told herself bedtime stories -they got mixed up with her prayers occasionally- and, really you would think she was Pooh seeking advice from Christopher Robin.

Back at their apartment Mable sat down in front of her mirror and started combing her hair. She had deep red mahogany hair that flowed down to the small of her back. Gretchen was always putting it up for her but Mable was constantly letting it down; it had become an item between them. Humming as she brushed Mable was also watching Gretchen behind her in the mirror.

Gretchen sat down and looked out the window. She was quite tired; it had been a harrowing morning. It would be nice to remain untouched by all of these concerns. She was exhausted and didn’t want to solve any more problems.

Mable had now moved on to some familiar humming. It was the same favorite rhyme from before: “Row Row Row your boat”….Between the stories, songs, characters and places, there were many offerings. But today this was the chosen obsession.

Gretchen wondered what it would be like to hum songs, eat ice cream and wander down silent summer lanes. Being surrounded by meadows and fields, twisting past brooks and giant trees, intrigued her. She could hear the buzzing of bees, and smell flowers in the fields…blue violets, and blue chicory (she had also collected flowers in Girl Scouts). And now, as she was enjoying the heat on her face and the breeze in her hair, she wanted to pick one of those flowers and smell it; she felt like twirling the stem between her thumb and forefinger, and just holding…

There in front of her, as she opened her eyes, her hand was stretched forward in the act of picking. She froze at first but then relaxed as she heard Mable humming…”Gently down the stream. Merrily merrily…” And so. Of course. it was no problem. The next time she was just going to go ahead and let her hand float on out there. Yes, sir, she was going to go ahead and pick that flower.

Tom Revitt has been a teacher, a USAF First Lieutenant on a B52 flight line during the Vietnam War and is now retired after more than 30 years as a field Rep for the Federal Social Security Admin. He had a veterans poem “Staging Area” published in The Deadly Writers Patrol Magazine #17