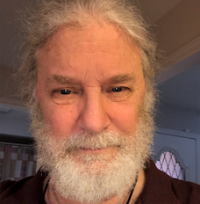 Olivia sat under a painted sky watching the suns go down. Her husbands had put the children to bed and now she was enjoying a moment of blissful quiet. It had been over ten years since she had started this project for her mother, the Queen. And tonight, at mid-night when, for the first time in seventy-five years, both suns would be below the horizon and the stars would be visible to her world, she would reveal the work that had dominated her life for the past decade.

I remember it well, she thought to herself; being called to Court and her mother being there in full regalia.

“Daughter,” she called from the throne. I came forward and curtsied to the Queen.

“You are, I have heard,” she continued with a certain sparkle in her eyes, “a designer of some renown. We wish you to design something special, something unique for our 75th Anniversary.”

“A daughter’s duty, for a Queen’s command,” I smiled and replied. And so the project began.

At first, Olivia thought about doing some sort of painting—perhaps something in 2D or maybe 3D. But court artists had been painting monarchs for centuries. The same could be said about busts and statues—so those were also immediately discarded. I could write a book, or a play, or maybe even an opera she thought. But she soon realized that while she could do those arts, her skill laid with visual arts and not literary arts.

She thought about what to do for some time and each idea was so monumentally small that they, too, were cast aside. She needed something bigger, much bigger. And before she realized, it was time for her family’s annual holiday to the far northlands of Yellowknife.

The time she spent with her family was nothing short of glorious. There were games to play with the younger children and winter sports to engage in with the older children. And in the evenings, she and her husbands…well the less said about that the better. But on other occasions she and her husbands and some friends, would sit on the roof deck and watch the ever-deepening shadows advance across the forests and valleys below. One evening something odd occurred.

She and her younger husband, George Edward, and her brother William, with his husband and wives, and the local governor and his wife, and the estate’s game warden were enjoying a light late dinner out on the deck and suddenly Olivia noticed that the wind had died down. Then she realized that there were no night sounds—no insects buzzing or bird calls to one another. She turned to the game warden and was about to ask what was happening when an electric tingle reverberated through the air. The governor pointed northward and said, “There, Your Majesty.”

And that’s when she saw it. Colors shimmering in the sky. Reds, greens, blues, whites—all moving across the sky in a sinuous manner, all interweaving with each other. It was, it appeared, a never-ending tapestry.

“What is that?” asked Olivia.

“It’s called the ‘Northern Lights’, Your Majesty,” the governor replied. “It is a natural electrical phenomenon that is caused by the interaction of charged particles from the sun with atoms in the upper atmosphere.”

They all watched in reverent silence for the minutes that the spectacle played out. It was then and there that Olivia realized the project that would satisfy her Queen’s request—she would bring the Northern light 3,800 miles south to the capital. But how, she pondered.

In the weeks that followed her return to the capital, Yuitas, she met with some of the scholars of the Royal Academy. The Master of Physics, was a Nubian who called himself ‘Midnight’.

“That is an unusual name,” remarked the Princess. “How did you come by it?”

“Well, Majesty,” he answered with a quick smile, “perhaps it’s because there’ll be only one of me every seventy-five years…and that’s probably more than enough.”

“Or,” he continued in a more serious tone, “it’s because with the absence of light we can see the stars and begin to explore the universe around our world.”

“Ah,” replied Olivia smiling and shaking her head in agreement. “I am,” she continued somberly, “commanded by Her Royal Majesty to ‘design something special, something unique for her 75th Anniversary.’”

“My family and I recently took our holiday in Yellowknife,” she told him. “It is a most delightful place,” she said enthusiastically.

“Did you see the Northern Lights?” asked Midnight.

“Indeed, we did! And it is that very phenomena that I wish to speak with you about,” she said.

“I wish to create the Northern Lights here in Yuitas,” she responded.

“That’s not possible,” he pronounced. “There’s not enough ionization in the atmosphere at the latitude of the capital to permit the Lights to light.”

“What if there were sufficient ions?” she queried.

He pondered the question for a few moments and then replied, “Then, yes, it would work.”

They spoke for many hours that afternoon and even more in the weeks and months that followed. And as the project took shape, many more Masters from other disciplines and more of their students were added to task. After two years of research, they determined that they would have to design and build a machine that would allow them to ionize a large area above the capital. They soon realized that a machine, an ion engine as they were calling it, could not be located on the ground, it would have to be space-borne. The Space Agency was called, and shortly thereafter, brought into the project.

In the ensuing years many engines were designed and ultimately discarded as impractical. But finally a design was discovered that was efficient enough to create the effects that Olivia was designing. And building began in earnest. The Space Agency designed a rocket to boost the new ion engine into the stratosphere and in the process discovered that an ion engine could be used for other endeavors. They kept that information to themselves.

And finally it was the seventy-fifth year and the anniversary was upon the Kingdom. Celebrations had been going on for days and tonight they would culminate in the light show that had consumed Olivia for the past ten years.

During the ninth morning hour, the head of the Space Agency called the Royal residence and asked for an audience with Princess Olivia. It was agreed that they would meet at the second hour after the second sunrise.

Promptly at the second hour, the head of the Space Agency was announced to Olivia.

He entered the sitting area, stopped a short distance from Olivia, and gave a respectful head nod and announced, “Your Majesty, I am John Thornton, the head of the Space Agency.

She spoke to the maid, “Caroline, you may serve and then leave us,”

“Your Majesty,” he started after the maid had left, “I have some information that will delight or enrage you, or both.”

“Please go on,” she responded.

“As you probably know, our space program is still in a relatively primitive stage. We’ve gone to our moon, but that journey took years to plan and over six days of arduous space travel to get there and another six days to get back. Travel to the other planets in our system will take years or tens of years,” he stopped and waited for approval to continue.

“Please go on,” she responded.

“Some of the many problems we are facing with manned space flight is that our propulsion systems are relatively slow, only 200,000 units per hour. That may sound fast, but when you’re dealing with the vast distances of space its really quite slow; the amount of fuel necessary to boost a rocket out of our atmosphere is measured in the tens of millions of pounds; providing enough food, water, and air for any size crew is, frankly, overwhelming; and finally, there’s the matter of gravity. Our astronauts do not do well in prolonged periods of weightlessness.” He paused to take a sip of tea and received another nod from the Princess.

“Once we achieve escape velocity from our planet, spaceships basically coast once they’ve expended all their available fuel,” he explained.

“I am familiar with the mechanics of space travel,” Olivia responded dryly.

“Of course, your Majesty,” Thornton replied. “When we received the design specifications for your ion engine, we quickly realized that it was the answer to many of our problems,” he continued. “An ion engine,” he went on excitedly, “accelerates very slowly, but continually. So it can provide ‘gravity’ of the ship’s inhabitants. The amount of fuel it needs can be measured in the thousands of pounds, as opposed to millions. And because it continually accelerates, the speeds it can reach are phenomenal.” He paused for another sip of tea, and another nod from Olivia.

“Imagine,” he said, “a trip to our moon in under two days!” Trips to the outer planets in five-to-ten days. And longer trips…”

“Yes, Princess,” he said drawing a deep breath. “In our explorations of space, we’ve discovered an inhabited planet approximately 4.2 lightyears away. We’ve been monitoring their transmissions for a number of years and have deciphered their language. They call their planet “Earth”. And tonight if you look closely during your program for the Queen, you might notice a small light receding from our planet. That will be our probe to Earth. Using your engine, a trip that would have ordinarily taken over 11,000 solar revolutions, will be reduced to 5.5 revolutions.” He sat back exhausted.

“Is that all,” she asked cautiously.

“There’s a bit more, Your Majesty, but that’s the bulk of it,” he replied.

“This is excellent news!” she exclaimed. “We will talk more of this tomorrow after I give the Queen her anniversary present. Speak to no one about this before then,” she commanded and dismissed him.

Olivia sat under a painted sky watching the suns go down. Her husbands had put the children down to sleep and she was enjoying a quiet cup of tea. She had started out to gift her mother the Northern Lights. But, as it had worked out, she had given her Queen, the stars. She wondered if her mother would be annoyed or amused and if the next ten years would bring greetings from our neighbors 4.2 lightyears away on a planet called Earth.

The winner of the first National Public Radio’s Selected Shorts Writing Contest, Mr. Richman’s work has also won contests at Writers of the Future, and has been featured in Writers and Readers’ Magazine, Blank Cover Press, Pocket Fiction Magazine, Synkroniciti Magazine, and other journals and anthologies. Dru has been part of an international writing group called Brainz for the past twenty years. Each month the group is charged with writing something — prose, poetry, short story, a song, screenplay — anything really, based on a one-word topic. Previous topics have included: mourning, fear, scars, numbers, and flying. Many of his stories are generated from topics written for that group. In a previous lifetime, Dru was a keyboard musician. Like many musicians, he started playing in high school in various ‘cover bands.’ Later on he played ‘on the road’ for almost five years in a band that performed county, country/rock, and originals. And for the last twenty years of his musical career, he played in an enhanced duo band called “LoveSong” – which concentrated on love songs from ‘the Great American Songbook.’ When Dru is not writing or doing musical things he is a mild-mannered Macintosh maven. His company, Mac Help Desk, Inc. [www.machelpdesk.com], continues to provide on-site Support, Sales, Training, and Service in the Macintosh and iDevice environments. Dru lives in Richardson, Texas (a suburb of Dallas), with wifey Ava, and their four-legged love child, a standard poodle named Jacob.

STRANGER IN THE LAUNDROMAT by Carlos Arce