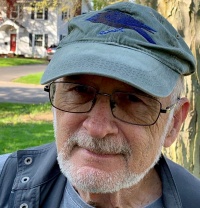 Amicus curiae: an individual or organization who is not a party to a legal case, but who is permitted to assist a court by offering information, expertise, or insight that has a bearing on the issues in the case.

None of the news sources looked too closely.
Did he use fire starter? What was he wearing?
How did he wear it? There was a photo of him
sitting with his head on fire. Did he make sounds?
Several feeds said there was no letter or manifesto,
Some linked it to a story of a shooter of random
pedestrians across town who then killed himself,
calling it “a day of chaos across the city,”
the hotline number at end of story
“if you or someone you know is in crisis…”

There will be a follow up piece
on the man & his life’s particulars,
what made him different, but it will not be
on what made him like the rest of us,
how the world he lived in happens to be ours.
A few witnesses will be interviewed
some may admit to shielding their eyes
as we do when a pattern we
don’t want to look at takes form
not necessarily from brightness
but also from the dark where shapes
begin to achieve definition

No to who we are, (an aggregate of selves
blind to our ensemble)

No to a life which allows this monstrousness

No to every man for himself
No to man No to self
that self finally saying the final No
“I would prefer not to.”

your roots together go down into Earth
Whose mycelial neurons let trees interconnect
Who saw the stars form, who sees
geese cross the Great Lakes every spring & fall,
hears them honk as they land with a splash
Triple Goddess, you saw Wynn Bruce die,
in the ocean of your existence felt one tear fall

It’s hard to imagine,
Hard to conceive of the size of compassion
Hard to think this act would come from such passion

Praise for Wynn Bruce!
Who chanted his searing song
on Earth Day in front of the Court
that would say Earth has no defense
against the men who would choke her to death
as if the Court said to Derek Chauvin
You don’t have to lift your knee
by a six to three majority.

Our disease is who and what we think we are,
It’s been this way since time began. Yesterday
Our fathers came home exhausted from war
We grew up thinking we were living in peace
Except for the massacre at Wounded Knee
we may or may not have learned of in school
and the massacre at Bud Dajo
we certainly did not learn of in school
and Little Rock, where we tried to stop
some of our own children from coming to school
and Selma, where we tried to keep some
of our own people from voting out fools
And My Lai where we couldn’t shield our eyes
And the glacier and the coral reef
we thought were unconnected to us
dead we thought, but the dead was in our thought
And the frogs and songbirds deemed expendable,
we call it Nature, kill so self can live to kill again,
the same self Wynn Bruce showed could be torched

But we finally got it! We never were at peace
the shooting just stopped for a breath
the Fascist repaired to his den
you think the monster’s dead
but look he lifts his head again

An under-reported act that was
as far from random as can be. Was it suicide?

Is it suicide to write a poem? Auden said poetry
makes nothing happen but is that what it’s supposed to do?
Isn’t to make an impression to take something away?
Displace the reader’s sense of time with the poem’s own?

Los was the poet and smith of William Blake’s epic,
the divine aspect of the imagination, the one
who labors to bring the sacred into every day.
Los did not so much write as forge, carve into rock,
engrave with burning stylus. His work was to make
creation prevail over his brothers’ impulse to destroy.
Los used abrasives & polishers, gouges, chisels,& gravers,
sharp-tipped pens to make what he saw come alive

The Peacemaker climbed the roof
of the cannibal’s house and
with perfect timing, looked
down through the smoke hole
so that when the monster looked into the pot
to see if dinner was ready, he thought
he saw his own face reflected & said
“I did not know I was that kind of man”

& lost his taste for human flesh.

This is not my story, but one
the Haudenosaunee tell,
May it become our story.
Not all who listen will under

Who put the cataract over my spiritual eye?
Was it God, transfixed by miter and chalice,
Was it the Council at Nicaea who gamed
the system, drained the blood, made sure
the effigy would not smell?
Was it Christ himself who wanted a golden nimbus?
So that today the story glows
like a receding supernova,
no longer blotting out this world,
which has its own story
which has its own glow.

I see Galileo, grinding and polishing his new lens,
persuading the Venetian Senate his work
has military advantage. He stands in sun,
he stands in shadow. He is shackled by the church
before you can say heliocentric.
He dies in his chains, but after the Enlightenment,
they roll away the rock and find him gone.

He descends from the mount carrying tablets with updates
New platform, old scrivener.

That rattle in the brain you can still hear in the Big Bang’s
hum remains, even if Jehovah’s sticky notes have fallen off.

this brain that thinks
pulse is a measure,

this brain that discounts the moment
for praise of a period,

I speak for the people who are not fooled.
We love color and sound,
the smell of our own sweat, the taste
of our lovers’ come, the gift of each blessed
livelong measureless day.

—Already paid
our pioneers were butchered,
our gravid women scalped,
babies ripped from womb,
nailed to fence like the devil’s greeting
worse than animals those cunning savages
who pretend to be human

God wasn’t fooled. We were cunning, our religions
had taught us there was a heaven and it was tomorrow.
Today the best we could do for ourselves and our families
in this fallen wound of a world was to be on top
so we learned in our cradles how to say later

At night on the middle passage: moaning cargo
keening through the deck reached the captain’s ears

—Some of them will get through he said
and God said pay now or pay later
Captain said —They’re not like us.

They were already slaves when we found them.
They’ll be better off here among Christians..

We knew in our smudged moral accounting
a cost not entered in the books
We trimmed the loose ends of our hearts & said
—later.

People came here to be free,
so even the Free Staters had to agree
there’s got to be cotton for planting
so it can be sold to the north who can then produce guns
to build a safe place when people flee homelands.
And if we look for a silver lining we’ll find one
as long we’re warm and well fed when we look
— a slave is a slave we said,
we’ll pay later
and you could say
war & amendments took
that fatal plant away

except lawmakers did not know
the law they changed was alive, had roots

—Why our payoff should we delay,
why not have it now they say

How long before we stop pretending
that anyone is listening but our own hearts,
where God lives, who has sensitive ears, can’t hear
over the noise, the whale-piercing roar of these frenzied days
How long before God says, I can’t hear you. Did you say now?

William Pruitt is a poet, fiction writer, storyteller, and Assistant Editor with Narrative Magazine. He had work published in such places as The Adelaide Literary Journal, Kestrel, Ploughshares, and Blueline, and in six books, most recently The Binding Dance and The Teacher Who Told Stories from Cyberwit and Hands No Hands from FootHills. His work can be seen at wpruitt.com