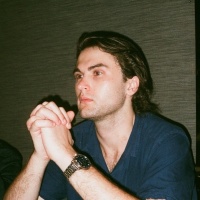 The night that you killed yourself
I walked down to the clearing where
As boys
We had built a settlement,
As pioneers we cleared the trees,
And when the land gasped out
We leaned logs against boulders
And fell asleep beneath the lean tos.

Then one night, when the fire whispered last
We were awakened by the human shrieks of a dying animal
And the next morning we found the still-steaming carcass
Of a dead deer lying on purple moss
With an eye resting gently on a soft, dead leaf
And we left it there

So the night that you called me
To tell me that you killed yourself
I walked down through the forest to the clearing
And found two boys,
Asleep under lean tos
With a fire breathing gently
Against the seething earth.

I. The Castrato on the Corner

The Castrato on the corner sings in the city of dominoes
sings of the concrete blankets
the birds that croak all night and into the day.

Sixteen, sixteen, the Castrato sings and his voice is unwavering.
Sixteen people, the mornings teem of men:
their small dogs and the men’s stuttering strides
their ballpoint heads, an insignificant triangle.
The Castrato sits on his corner,
on his black plastic, throne
subaltern, he watches these sorry men
counts them and their sorry, stuttering strides
but chooses not to sing of them.

The Castrato is the singer of a court
and each court has its King.

Each night, when the people are far apart,
their camps, their reeking mass, like globs of spit on the streets and
manbarren avenues,
the Castrato serenades his bearded Majesty,
who reigns prostrate on the unporous ground.

The King hears this voice and maps in his cluttered mind
the extant corners of his realm.
The King touches his urban estates, their towering cliffs.
He floats to the peopled cells
and smiles to the suffocated ground, in awe of his noble subjects.

The song trembles only far enough to reach the King
and his most cherished.
It does not reach the city’s steeples,
its silent and seething innards.
The Castrato looks to the near-deaf and gently-battered moon,
cursing the nocturne,
The cold that belongs to them both.

The sign on the train station’s door turned a year old this weekend
Temporarily closed.
The Railroad Girl sits above the cut her legs swinging
and all about the quiet concrete.

In the Watched City the people walk on strings
and await their sorry reinforcements.
The old man lets a rat climb over his bed
and on the islands those called unrepentant bury wooden caskets.

From the Rattling miles away, the Watched City is innocent.
A pigeon flies from its open wounds,
The city’s blood blameless,
repulsed by the unnamed infection, unsmelled,
a pigeon flies from a gash in the punctured ceiling and crawls across
the unmapped sky.

The Railroad Girl forgets her hands and her thumbs and how they bend.
In the mansodden car we wait and wish for white speckled or piebald breasts,
for little crown beaks
with which we might rip at the porthole somewhere in the City’s abdomen
our bejeweled and ravenous new mouths tear open a clean circle
let vent the choleric shroud, let bleed the mealy human current

Before time, or indeed the bloated earth,
could wretch the Railroad Girl from her ironspiked spine,
she did so herself and clutched the last unfloating particle
before the Watched City ate the train in secret.
And she wondered if she was just a girl now,
naked of the iron and the electric,
the steel-shrouded burglar,
the artifactual woman,
the Third, a man, barren and questioning.

III This is New York

It’s evening, outside it’s New York, and the subway rattles swiftly
through the darkness.
His steady pilgrimage to your side of the railway car is slow, a crawl, and
you lean backwards into your seat
because he leans eighteen inches too far in your direction when the train lurches,
And when he nears you close your eyes,
because the glance looks in you.
For a moment, there is an impulse inside that envisions the dollar
bills in your pocket
crumpled in the grime of his hands, handed in for a glass bottle that
stands upright
on the street of the lost souls.

There are men that don’t feel the grease of subways and rarely
circumvent the sleeping bodies on the church steps,
knowing their children will only confront certain realities.
And though we together make one sum,
there is more than one New York we do not share.
When I walk past shimmering skyscrapers,
I wonder if from their Cathedral of Aspiration these men look down
on the vascular system
of the city below
and see us.

The grass gets yellower in the early knight
all the grass on the three knobbed hills.
They rise from the fleshy ground like women’s breasts,
that from the young boy
who forgets his owning nursing,
resents his weaned lips,
and has not been with a woman to know her breasts.

The three hills rise, two of them beside one another.
The young boy and his family are camped on one of the hills.
On the third, far away, sits a castle
that springs from the grass.

The grass springs from the trees.
In the castle are prisoners.
Are the Virginia State Penitentiary.

The boy with his mother looks at the far hill with the prison
and cannot make the prison into a finger or a mangled wrist,
into anything but a castle,
the castle and the hills that look like three breasts.

They boy and his family all think about the men in the castle,
the uniformed men. White & Black.
Stripe the jaundiced ground,
the yellow lights
the yellow sky
the virginia earth.

In the ground the boy digs
in his eye.
He digs with his fingers
and tunnels,
but he cannot find the concrete of the castle.

Night.
The lights still yellow and the young boy
in his little tent
Cannot sleep against the hard unbreathing ground.
He stomps
The ground trapped beneath the youthtired palms of his feet
pink but not to the night.

He leaves the tent
smells the dark the open dark
no creatures but him then.
The land sits like an anchor on black speckled porcelain

The young boy looks at the third hill
with the castle sitting on it like a hat.

The third hill nods its light into the abject silence.

The men inside, sleeping in their concrete shackles.

The first drops of sunlight do not yet remind me of the cursed blood
and in those moments I do not yet want to dissect my own knotted head,
as the ax did hers,
and find that engram in which those shards of skull
gray hair matted, unfolded bones,
are stored.

the ax hemorrhaged in midair,
until the earth,
drank its blood in anticipation.
Am I troubled or am I dead?
I am awake now
and I remember.

I wanted only to prove to the world my triumph
to report to them what I could do and what they could not.
that one could look at me
and not read, as it were, a certain sorrow (1)
but rather see the transformation
from dust to mountain, the course held only by those
who know that nature, corrected and guided, (2)
is theirs, the victim of their aspirations
and those of all men.

so when the trembling light shined on the blood
which the ground would not surrender
I saw the futility of my ignoble sacrifice.

Winslow MacDonald recently graduated from Columbia University in New York City. Originally from Maine, Winslow has published his historical and political research and hopes to produce more fiction as he encounters his youth in the city.