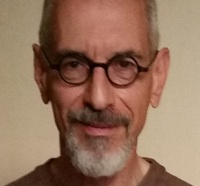 What It Came To

Or took off my shirt in front of the mirror
Or lay on the couch in the empty apartment
Or learned orange crayon was how you made skin
Or was an old man feeding cats in the dark
But it came to this anyway, to my surprise,
It all came to this. This is where it began.

If the plants arriving from themselves.
If where pictures are rising up from nothing.
If a river singing strongly through the desert.
If the crowded room but the empty ceiling.
If silence slipping between the sounds.
If the enemy’s face opening and a baby.
If housing in a grain of salt.
If stars filling the day sky.
If a stranger in the driver’s license.
If nobody’s fingerprints.
If empty shoes.
Then squares of sunlight on the wall.
Then a chair keeping itself company.
Then a breeze all through the house,
The hedge all afternoon,
A door out of the burning building
In spite of the advantages.
A going out.

Two people don’t hear the same poem.
I’m one of a pair and I’m always alone.
We were like two drinks of water in the same glass.
Simply to live with him I had to learn
How to live without anyone.
Our living room took place out in the desert at night,
Where there were all those stars but no roads,
Where if I learned to survive or not was my problem.
I put my eye to a dry crack in the wall.
I could see a country where the weather was just beautiful,
And to my further surprise he was there.
After he died he knew where to find me.
Some mornings we sit together on the couch
And talk about how we said goodbye for good.
The first time I laid eyes on him I knew
I had never seen him before.
He had no brothers or sisters or parents,
Just those hints you sometimes find in poems and novels.
He was something about me, wasn’t he?
When he said he could no longer live with me
I thought he meant he was leaving.
I looked into his eyes never seeing him again.

So there you were
In the boat of the sun
Gliding the smooth river under the world,
Alone as usual, not expecting
Much as your mother
In early life (as you said
Those many times)
Had erased your taste with ketchup
But with a mild appreciation
For the solitude and quiet
Which anyway was not disturbed
By anybody’s barking dog
Or developers who bought up
All of the old neighborhood
To the door of the apartment
You’d lived in forty-seven years
Whose threshold you refused to cross
Though your old and friendly books
Made their own ways to the dumpster.
Meanwhile you enjoyed the still
And quiet of your oarless glide
For as long as such rides last,
In no hurry to arrive.

The most sought after
And the hardest to remember.
Everywhere you look
And hidden in its own shadow.
The promise kept at the end of every fairy tale
And an old yellow bruise.
A rose that sings forever.
A journey through thorns that never ends.
Remember,
When the time comes
The answer is yes.
The answer is “I do.”

Peter Cashorali is a psychotherapist, previously working in community mental health and HIV/AIDS, now in private practice in Portland and Los Angeles. He is the author of two books, Gay Fairy Tales (HarperSanFranciso 1995) and Gay Folk and Fairy Tales (Faber and Faber, 1997). He has dealt with addiction, multiple bereavement and the transitions from youth to midlife and midlife to old age and thinks you can too.