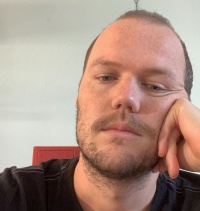 A woman, hands folded in front of her stomach, walked across my front yard. I watched from my window. It startled me. But why did it startle me? It wasn’t what I expected. And what was I expecting? It wasn’t this. It wasn’t anything. It certainly wasn’t an old woman in a gray robe slung over her shoulders, languidly pacing to the end of my lawn, plucking a flower from the limb of a branch, and holding the plucked flower to her face. Definitely not that. I didn’t expect to do anything about it, either. Let her be, I thought. Let it happen. When I see someone do something odd, I think this: someone’s odd is another’s normal (even if it is intrusive). But something drove me to the door. Maybe I owed it to myself. Maybe there was a connection between what drove her to my yard and what drove me to her.

I saw her through the strained mesh of my front door. I felt light in my bones, like I had nothing inside. I pushed myself out. I waved at her. I walked to her.

She stood at the hedge that separated my house from my neighbor’s. If she saw me, she sure didn’t rush to acknowledge it.

This hedge she stood at, it’s dotted with these red, elongated flowers. The flowers are attached to leaves shaped like spades. I don’t know, it’s a little hard to describe. But I know what they look like once I run the fallen flowers over with my lawn mower. They resemble shredded rose petals. Of course they’re not roses, though. I may not have a green thumb, but I do know that much. Or else, they are like pieces of a popped balloon.

I inherited these flowers when I bought the house. Not much else to say about their origin. I don’t mess with them either because the power lines from the street feed into a green box within the hedge encompassing the flowers. I’ve seen city workers park their white trucks on the curb, then plant little orange flags around the area and cut around the hedge to get a good look at that box. I’m not going to make my own statement by cutting down that hedge and infringe on some governmental territory. I’m not going to get electrocuted, either. Keep things as they are, I say, except this old woman. She’s got something else to say.

Well, I went to this lady to see something. What that something was, I don’t know. I wasn’t about to ask her to leave or anything like that. I felt like she might tell me something I needed to know. She possibly had some sort of answer to all of this.

We introduced ourselves. She lived two houses down, she told me. She pointed to her house to help me see. All I could see was the side of a white brick affair. But she lingered in her pointing, revealing her hands from wherever she had kept them before, possibly in her robe pocket. I wish she had kept them there because I couldn’t help but feel diminished by her hands. Her face was the face of any old woman, sure, not much more to say about it other than the peach fuzz hair on top. But her hands were another story. Her hands were held together by a discerning nudeness of worn skin, speckled and thin, translucent enough to see the blood flowing through the veins. Whatever those hands once gave her, they endured very little now. Vulnerable, I’d call it. I wondered if it was worth my waving her down.

We got to talking about the neighborhood and politics, little nonconsequential things. But she brings up her husband and their life situation like it’s the thing to do.

“He had a stroke,” she said. She twirled with her bony fingers the flower from my yard. I imagined those fingers poking hard on my chest.

Nothing came to my mind. I wish it had. I wish sometimes I could say things on the spot like most people. Most of the time I feel like I ought to say something of merit and consequence, but nothing ever comes to my mind. Do you get me, here? It’s like I lack a certain vocabulary when I’m put on the spot. I resort to the basics.

To my good fortune, she kept talking.

“He’s sleeping now,” she said. “The only time I ever get to do anything or go anywhere is when he sleeps.” She pinched the flower between her thumb and forefinger. “Which isn’t very far.” She lifted her arm and looked at the thing while we spoke. It took a great strain on those hands to do this, I could tell.

“My uncle had a stroke,” I said. “My aunt took care of him for a long time.” Why was I so ready to admit this? I’d normally keep that to myself. I guess I tried to connect a few things. Sympathizing. “He lived another fifteen years afterwards.”

“Fifteen years? Good Lord don’t tell me that,” she said.

From what I remember of my uncle were his eyes. His eyes looked as if someone was trying to pinch his lids shut while he equally tried to force them open. He never blinked and always looked to the side. You saw more white in those eyes than anything else. I almost asked this lady how her husband’s eyes were, what kind of condition they were in, and if they seemed distant. But, of course, this isn’t the thing to say.

“I can’t stand to watch him for another year,” she said. “I’m not like that, fifteen years. I told Harry. I said, ‘You need to get off your ass.’ He can move, but it’s difficult. But he can, you know? He just sits in his chair all day. I move him from our bed to his chair and that’s all the movement he does. Insurance even got him one of those mobilized things. But you think Harry’s going to use it? No. He goes nowhere. Believe me, I warned him, too. I said, ‘If you don’t wanna get up, you’re going someplace. Someplace not here.’”

Some place not here! Was she going to kill her husband? Her Harry? I got the impression she could. Sure, she could. She had her wits. And she seemed years off from joining him in such tragic suffering. But I couldn’t ask her about any of that. It wasn’t my place, for one. And two, it was the first conversation I had had with her.

Thank goodness, though, she was talking about sending him to a facility.

What did I know about retirement homes? My father just sent his father to one. That’s all I knew about it. I told her my grandfather lived in a retirement community.

“Harry’s been retired his whole life,” she said. “I can’t remember him going anyplace, even before all this. All I know of him now, and I hate to say it, is him in that chair. Him in that chair just heightened all what I had thought of him before.”

She brought the flower closer to her face. She peeled a petal back with excruciating effort and peered inside. All to my dismay.

If I was doing anything I wouldn’t be able to tell you about it. I guess I was standing there like a dope or something. Who knows? It’s not worth mentioning. But I started feeling for the stroke-victim-husband. Hell, I felt bad for her, too. She was being dragged into all of this. She was forced to make a decision. You have to feel for people like that. They’re my neighbors after all. Telling him, a stroke victim, to move or leave, though. It’s a bit much. Too much. I mean, it’s not hard at all for me to move around, but I guess sometimes it is. I guess I have my own troubles getting from here to there.

She stretched the flower towards me.

She said, “I’ve been meaning to ask. What kind of flower is this?”

If I had looked like a dope before, I must’ve looked like a buffoon after she asked that. I didn’t have any idea. No sir, not a clue.

“I see it from my yard,” she said. “Which is as far as I can get without him hollering for me to come back. Let him holler now, though. I don’t care. If he needs me, he can come get me.”

I thought I could hear a voice pouring out through her open door and down the steps of her porch, but very faintly, easily to be confused with the sounds of a TV going off in the other room or a car radio in the distance. I couldn’t tell if it was real.

“Sure does,” I said. “It has to be hibiscus.” But it was the kind of hibiscus that didn’t bloom like the beautiful ones, the ones where the petals open so wide that they curl back a little bit, like they got everything and more to show you. The one that was in my face, in my neighbor’s grip, was rolled up with its stigma poking out. That’s how I could tell it was a hibiscus, that stigma.

She took a small plastic baggie from her robe, unzipped it, and dropped the flower in. “You don’t mind if I take this, do you?” she said.

To think, I had the option to deny her this. “Please,” I said. “Go right ahead.” I just shut up after that. I thought of a few things, but what else could I say?

“I asked the man at the hardware store if he knew what the flower was,” she said. “I described it to him as best I could. But I’ve been too far away. I told him everything, the details of what I could see from my house to yours, which isn’t much. Red is a popular color for flowers, come to find out. He told me to just bring one in and he’d be able to tell me what’s what.

“I want to plant these flowers in my yard, right at the front stoop,” she said. She stuffed the bagged flower into her robe. I could see those flowers going there. Sure, it’d be nice.

I wished her luck.

“Luck,” she said. And that’s all she said. She left just as remarkably as she came. God bless her and her lethargic husband. I wish something good for the both of them knowing it probably won’t come. But I wish it anyways.

There were things, too, I’d come to found out much later, that were unmoving inside my own house.

Alan Massey is a writer from North East Florida.