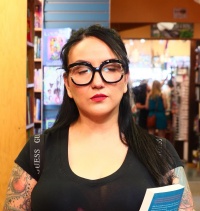 Sixteen was the number of balled up tissues on the floor. She counted them each time she dropped a new one to the floor. The pillow was sopping from the tears and snot. She just lay there in a pool of tears and snot filled despair replaying the entire thing over and over in her head.

It was the second time she called her, and she regrated how kind and stupidly understanding she had been the first time. She tried desperately to be the better woman.  This time she wouldn’t be so nice. She had never heard her own voice sound so full of anger and desperation but seeing the messages between the two of them was more than Olivia could handle. There, in black and white, she saw the man she devoted her life to tell another woman that she was “the most beautiful.” He wrote about all the passionate things he wanted to do to her. It was awful.

“Debbie, it’s me, Olivia. Yeah, we spoke last month. I thought I told you to leave my husband alone, you slut!”

“Are you serious,” Debbie chuckled, and in a spiteful tone she said, “He doesn’t want you, you ugly old bitch. You’re a has-been. He told me so. He said I was delicious.”

Her words were replayed on a loop in Olivia’s head. It was like each syllable of every word dug into the already open wounds. This was the third affair he had in five years. The whole ordeal was taking its toll on her mental health, and according to Debbie, on her looks as well. This was the worst one yet. He was obviously in love this time. He apologized to Debbie for Olivia’s behavior and the sound of his soft voice was almost horrific.

“Olivia, give me the damn phone,” he said through clenched teeth as he wrestled her iPhone out of her hand. He scratched his head in the way he always did when he was tired or overwhelmed as he put the phone to his ear and spoke to Debbie in a gentle and remorseful tone. “Look, I’m really sorry about her, Deb. I’ll call you later.”

Olivia couldn’t even speak as the floodgate of tears opened. Did he really apologize to her?  Ten years and two little carbon copies of him and her later, and he really just apologized to his damn mistress? What the hell is happening, she thought.

Seventeen balled up tissues, she counted.

“Mommy, are you crying?”

“No, sweetie. Mommy just had a hard time sleeping, that’s all.”

It was hard to focus on what Emily was saying. Her tiny voice was almost like that teacher on the Peanuts Cartoon. It didn’t matter. Olivia knew she had to peel her face off her wet pillow and carry on being a mom despite feeling like she was losing her identity as a wife.

“Ok, I’m getting up. Can you be a big girl and wake your brother and pour a bowl of Fruit Loops for both of you? I’ll be downstairs in a minute.”

The clock read 8am. She hadn’t slept and the exhaustion from overthinking and incessant crying reminded her of the hangover’s she’d get when she and Jake first met in college. Those were better days. Maybe I should shower or at least change my underwear, she thought. Even that seemed like too much work. She just dabbed a dollop of toothpaste onto her tongue and moved it around her teeth. The minty taste was enough to remind her that she was still alive, and she could keep going, at least for today. She was in the middle of tying her hair up into a decent enough ponytail when she heard the front door downstairs open and shut. It was him. He hadn’t come home last night. Maybe he was with Debbie, or maybe he was just too ashamed to face his family.  Either way, she wished he had stayed gone. She quickly took an inventory of her body odor and rinsed her mouth. The last thing she wanted was for him to have anything unflattering to report back to his tramp. The floorboards creaked with every step as Jake slowly made his way into their bedroom.

“Olivia.” His voice was soft and remorseful, the way it had been when he spoke to Debbie. “We can make it through this, Olive. We always have.”

She couldn’t even find the words to respond. She just stood there with anger and hatred building in her gut.

“I feel tired, Jake. I’m just so tired.” Her flat words sounded so generic. She said the same thing after the last affair. “Please don’t touch me,” she said as she backed away from him.  Her plea went unheard. He picked her up and carried her to their bed with ease, the way he had when she was thirty pounds lighter. “Jake, I don’t want this,” she said. She truly didn’t, but it was pointless, and she didn’t try to fight it. He kissed her chin and neck as her body went numb. This was the game he played. No matter how many times she tried to learn the game, she would never be the winner. She turned her head to the left as he continued to kiss her neck, then her cheek, then her tear-filled eyes. Her face met the sogginess of the pillow once again as she counted eighteen balled up tissues.

When he was finished, he grabbed a handful of tissue from the floor to wipe away the remnants of what was once their love. He’s disgusting, she thought. In all these years, this was the first time she actually felt appalled by his outright entitlement to her tears, her trust, and her body.  He was no longer the handsome golden-haired small-town boy that she once knew. His indiscretions had hardened him. His eyes were carried by constant dark circles. The corners of his mouth had become wrinkled from the tightness of his lips. Even his love making was stomach turning; fast and ruthless.

“Jump in the shower and I’ll clean up your mess,” he said as he playfully kissed her forehead. It was as if he had already forgotten about yesterday. Swept it under the rug.

One by one he gathered the remaining tissue and discarded each into the bin. He was methodical as if he could read the tales of hurt that he had caused his family in each crumpled piece. He looked at her as tears began to form in his eyes. Without speaking, they both knew that this was long overdue.  He sat on the edge of the bed, naked and pitiful. Olivia stood over him. “Olive, please don’t do this,” he pleaded.

She said nothing. Only let out a long heavy sigh as she turned to gather a small bag of personal belongings.

“Jump in the shower,” she said. “I’m done cleaning up your mess.”

Bel Torres is a fiction writer from the border town of El Paso, Texas. Her love for travel, culture, and music inspires the stories she writes.