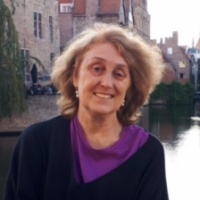 After my husband died, my realtor cast his eye down the length of our living room, which could have worked as several bowling alleys, and nodded.

“I can do this,” he said with a practiced eye, adjusting that tan Burberry plaid scarf he always wore. The house had begun to remind me of Norma Desmond slinking down the stairs, readying herself for a close-up. Our realtor played the role of her devoted butler so completely the buyers never knew they were being whisked off, caught up as they were in the faded grandeur of the place. Picturesquely gabled, our North German home retained a certain bizarre glamor—also gutters housing mice, dead leaves, and one time a squirrel who rambled his way into the attic insulation.

The way our bearded, boyish realtor, a Banana Republic fashion plate, waved his arms toward our bare-bones living room with its dented, damaged furniture, its faded family photos—as if our rustic, rundown place were the Taj Mahal—proved hypnotic. At least to the buyers, the husband shooting his wife an appeasing grin, the wife growling that she wanted the house this red-hot minute. “This one was okay, Schatzie” his eyes pleaded. Her shoulders were still hunched, her brow furrowed. The agent pounced.

“And look!” he crowed, turning their attention toward our drab kitchen like Noah to dry land. “You’ll get the stove, the refrigerator, the sink, the dishwasher, the table!” He paused, letting them feast their eyes on blue tiles peppered with nicks and dents glossed over with non-matching blue nail polish, the microwave that hadn’t quite given up the ghost after twenty years, the dishwasher that groaned like a woman in labor, the smeared windows from which one could glimpse the overgrown garden and the snaggle-toothed fence, collapsing in places. Just before the antiquity of our appliances registered in the wife’s eyes, the agent breathed, “You know how long it takes for a kitchen to arrive—and here you have one ready-made! You won’t have to eat take-out pizza for weeks!” He swept his arm toward the sink like a proud farmer showing off a prize pig.  The wife’s brow un-furrowed. The husband stopped trembling. The two of them giggled over the other house they’d bought without a kitchen, the tedious weeks of pizza delivery.

When our realtor had three bidders and one went low, he told me, with a nod and a wink, how he was stringing the low bidder along, telling him the other buyer had to get back to him: “It’s driving him crazy!” (Chuckle, rubbing his hands with glee.) He scheduled showings so that arriving couples always saw one or two others leaving. In silky tones, he pointed all prospective buyers toward the grungy nook in our living room he had dubbed, “a lovely dining area.” With a magisterial wave at the crayon stains on the wall, the pockmarked hardwood from years of children banging chair legs, toys, tap shoes on the floor, he hugged himself as if it gave him joy to stand there. In that ultra-smooth voice, he repeated: “a lovely dining area.” He had the genius to murmur again, “Yes, a lovely dining area,” as if it pained him not to be able to sit down in it and consume a meal. “Lovely,” he sighed one last time, all but letting a tear fall.  From the way his victims were nodding and smiling, I could see that he could sell dirty, slushy New York snow to arctic polar bears. All the while I was thinking: “That’s where the baby wrote her name on the wall. That’s where we took a Christmas photo of all three kids on the rocking horse. That’s where the oval portrait of Josef’s parents hung.”

On the landing of our lovely but decrepit home that has survived the energetic childhoods of two boys and a girl is a sunken board, the result of the too-heavy tread of a very large babysitter. We’d covered the thing with a plank. My husband couldn’t believe the kids’ favorite caretaker could damage so much, but I figured she was probably chasing one of them on one of the many occasions on which he endangered himself.  Even the agent told me, “This looks bad!” and urged me to get someone to fix it. When it became clear that I could not do so without incurring major expense, he spun some yarn about the unusual style, very historic, with which the boards had been joined. He warbled that the house had “real character.”

Like any good hypnotist, he could convince a person that an apple was really an orange. He could have been pointing to a steaming pile of horse manure and, with an expression of wonder and delight, convinced folks that here was real find. An antique. The genuine article. He knew how to make people want something desperately, and then make what they wanted hard to get. “The art of our necessities is strange,” King Lear said, “And can make vile things precious.”

This charming young man brought over garden gloves when my son needed to mow the lawn, gave me the exact phrase to say when my movers tried to weasel out of the necessary date, and promised, over and over, that I would pay “nothing.” The buyer was to pay all, and I must not worry about a thing. He would take care of everything.

The moment did finally arrive when I was to bring all sets of keys over and check all meters, so that gas, water and electric bills would be switched to the new owner. I was looking forward until an email arrived from our realtor. “Dear Melissa,” it read, followed by another “dear” for each one of my children. He thanked me for the trust and confidence that I had placed in him. He was very happy that he was able to help me and my family in such a “difficult” sale. Putting up our family home for sale after my “tragic loss” must have been a “roller-coaster of feelings” for me. He was even more honored that I had “invited” him “on this journey.”

When I type this over now, I wonder how I didn’t vomit on my keyboard. Instead, I felt stunned—but curious. What on earth was he talking about? Subsequent paragraphs boasted of his pride in achieving a “staggering sale price”—perfectly true in these buyer-beware COVID-distorted times. He pointed out that he’d done far better than his competitor, a large real estate company. As our contract stipulated—and Germany, the location of my former family house, lives for iron-clad contracts—I owed him nothing. “The buyer pays. You never pay,” he had whispered repeatedly, in tones I found faintly embarrassing at the time. But now, because he had put “a lot of time and effort” into the sale and transaction, because of his “very effective sales strategies” and because “not many” agents would have put “that much time and effort and consideration” into us, he wanted “kindly” to request a bonus. He wanted 1% of that sales price, because he thought he had done “some magic” for us, and was hoping some of that magic would affect him. Did he actually say that? Ladies and gentlemen, he did. Even though he’d used the word “kindly” three times in three sentences, even though the thing reads as though he’d googled the right phrases for a condolence card. I started to feel guilty and wonder if I should pay up. Never mind what he’d made off the buyers—enough to buy an Alfa Romeo and a couple of diamond rings.

The man was working magic all right, since I continued to think of him as scouts-honor friendly. I doubted myself. Would I be stiffing him? I’d given him a nice bottle of champagne and a New York mug. I couldn’t stand my urge to see his request as reasonable. Our contract, I reminded myself, said otherwise, and I knew enough to appreciate the sacred authority of the German contract. The amount he wanted, when I did the math, was stupefying. On top of the four percent he’d gotten off the buyer, he wanted one percent from me? Friends whom I asked sucked in their breath. “Does he know you are a widow? He knows you have three children? And cancer?” Well, yes, and I remembered the casual-seeming questions that led to my revealing these things. But as I write, the steaming pile of horse manure, doesn’t seem to stink—and that’s where he worked his wizardry. I still see the kind young man (he said he was “kind!”) politely requesting, like a harmless schoolboy, his reward.

An American living in Germany, I often misread signals. In pre-COVID times, I forgot the polite, obligatory handshake, and felt bamboozled by the lust for precision (it’s not unusual for ten minutes of a department meeting to evaporate in disagreements about whether point 1a or point 1b is under discussion). Was this request for 1% of the sales some strange German custom? The agent had said at the very beginning that he often remained good friends with the people for whom he sold houses.

When it was time to complete the sale with the handover of keys and the signing of a document, he said he could come over to my new place and pick them up—“I wanted to save you having to return to the house,” he texted, as if doing so would break my heart. First, I agreed. Then I panicked, because seeing him alone meant telling him to his face that I did not want to grant his request. It seemed much better to surround myself with other people—like my kids and the buyers—so as to avoid the moment.

Over to the house we tramped in the snow, me with all the keys plus what I was pretty sure were my office set, but I hadn’t had time to check. I’d try them on the front door to make sure. And I did. There hovered the realtor to the left of my shoulder, like Donald Trump behind the debating Hillary Clinton. The owner and I sorted the keys, signed the document making gas, water and electric his responsibility, but my office keys vanished. It was as though the house had swallowed them, and they may have fallen through the lining of my coat, but I know I was dreading the moment when I’d be on the sidewalk with the realtor, waving goodbye and saying “no.”

I must have sounded ladylike and timid. “We think you’re a fantastic agent,” I trembled in front of the gate. “But I have massive expenses and—” I faltered, watching his expression go from boy scout to serial killer.  King Lear was right. The art of our necessities is strange. This vile thing who seduced our buyers into seeing our lopsided pre-war Addams Family mansion as a palace bilked me into thinking of him as my pal, the guy who always had our back. But even in this moment of having to see his face shift, I didn’t back down. Instead, I faked a smile, turned my back to him, and walked away.