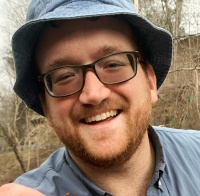 They came every day to see one another. She worked at a bookstore on a college campus- selling kids who could be her children’s children books, notepads, and pens. All the bullshit that freshmen buy before they realize it’s overpriced and they can get those books for free. She always wore the same red jacket she got back in high school, and kept her graying hair straight. She had crows feet and laugh lines when she smiled, tipped really well, and shot pool left-handed. She talked and laughed a lot, but she never talked about family.

He wore his years like a yoke. His back bent forward as he leaned into his cane, and the beard that reached his cracking leather belt was more salt than salt and pepper. He always came in worn out blue jeans and a threadbare flannel shirt. Sometimes the shirt was a different color. He shot Wild Turkey and drank Miller light when he played pool with the other sharks. He was pretty good, too. But he never said much to me, or anybody who wasn’t her. Nobody knew what he did for work. I assumed he was retired or on disability because of his back. He’d sit and stare at you with eyes as wide as saucepans and he’d drink in every word you said like it was your last. And he’d smile a lot and nod at you for emphasis, but he never tried to get a word in. Just sat and stared at whoever was talking, then he’d go kick someone’s ass at pool.

She always got there first. She would get off work and grab her seat at the bar, and he would walk in a few minutes later. She would act like she was seeing an old friend for the first time in a long time. She would stand and they would hug, and she would kiss him on the cheek. Then she’d smile at me and order the first round. They’d drink and smoke and smile at each other when they thought nobody was looking. Then when the sun went down and the young people got there, he would hobble out the front door. She always followed him. If you paid attention you would see them kiss outside- just a quick peck- and go their separate ways. And the next day they’d be back. Same shots, same beer, same pool table by the ancient jukebox. Same quick kiss when they left. Somebody told me they never went home together.

Two stools at the bar were their regular meeting place. They’d share a pack of Camels over a dirty glass ashtray between games, and whisper to each other while watching whatever was on television. And when the city passed an ordinance saying they couldn’t smoke inside anymore, they took their habit outside. They would step out and smoke like dilapidated chimneys by the wrought iron fence in the courtyard. They complained a lot at first, but I think after some time they preferred it. It gave them the chance to be alone. If you passed by when they were out there together, their voices would drop conspiratorially. Like they had a secret they didn’t want you in on. He’d grin at you out the corner of his eye, and she’d play shy and blush and cover her face with her hand when you tried to talk to her. Sometimes if you looked outside, you would see them holding hands. He would reach over with hands so gnarled they looked like tree roots, and he’d crawl his fingers in between hers, and she would hold his hand in her lap and smile like she was drunk on him. After we closed I’d find piles of cigarettes and an empty Turkish Gold box in the corner where they sat.

But one Monday they didn’t come. It took me until 7 to notice. One of the other regulars pointed it out. I don’t think he knew their names, either. She always paid in cash. We wondered what had happened and then kept going with our evening. Nobody shot Wild Turkey and there were no Turkish Golds in their corner when I swept outside.

The next day when she came in, he didn’t come in after her. She told us he’d had a heart attack and died over the weekend. Nobody had found him until he was cold. We bought her shots. I mixed her new things and let her try some of the top shelf liquor. I put them all on the house tab. She cried a lot and didn’t shoot pool, and she left before the sun went down and the young people got there.

Nobody saw her again for a few days.

When she started coming back, she never stayed for long. She would sit by herself and queue up old country on the jukebox. She never played anything happy, and I never skipped it. While she listened she would stare into her beer like she was expecting something from it. She’d play a game or two with other men, but they weren’t him, and she would leave. She came in and sat at my bar like it was something she had to do, like when you’re six years old being dragged to church on Sunday mornings. A few months after he passed away, I realized I hadn’t seen her in a few weeks.

I never saw her again.

When nights were slow, I would make up stories about her, and why she came back. Then stories about why she stopped. Stories about her finding happiness with someone else, in another dive bar in a different neighborhood. Or if she only came back because she thought she would find him there and his death was just a big misunderstanding, or if she hoped she would see his face in the foam of a room temperature mug of beer. If she went back and sat at their table and smoked by their fence trying to feel something that wasn’t there anymore.

But I knew why she never came back.

I worked at that bar for a few more years before leaving town for another job. In that time, the regulars taught me how to play pool and shoot dice. Coworkers taught me how to cook, pour Guinness, and smoke pot. I learned how to talk to women, how to shoot whiskey and tequila. I learned how to fight there, too. One summer we got rid of the jukebox and started playing music from back in the office, and I got to make my own playlist. I didn’t add any country.

If you stop by that bar you’ll find my initials carved into one of the booths, lit by neons in the window above. They aren’t there alone. Next to them are the initials of someone I used to know. She drank Jameson, smoked menthols, and introduced me to Bukowski. She had an Invictus tattoo, and laugh lines when she smiled. She taught me how to see poetry in things. I think she loved me, in her own way, before she broke me.

When I visit that bar, I remember the good times. Bad decisions and good memories. Friends that I haven’t seen in years, cocktail competitions, and one night stands. I remember cigarette smoke and burn marks in stained wood. I remember that sometimes, the burn marks were in me. I play pool. I shoot Wild Turkey, and drink Miller Light. And I think about every woman that ever loved me.