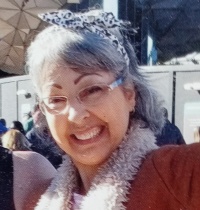 The man screeches at the bird watcher he nearly
runs over, screams at his ice cream melting
in the heat, shouts at his noisy twins just being kids.
He once had a wife. But he hollered a few choice
words and “Are you, deaf!?” one too many times.

In a rush at the convenience store, he peers at a young
woman holding up the line who seems to be waving
her arms at the counter clerk, while the young clerk
responds in like manner. The man’s simmer peters out
the moment he realizes the young woman truly is deaf.
Yelling would not help.

The rush of compassion he feels for her startles him.
He jumps off the line to open the door for her as
she leaves. She smiles at him, touches her chin
and moves her hand out towards him. He smiles
in return, imitating her moves. The people on line
stop to stare. He turns his scruffy cap to the front
and returns to the end of the line without
a huff about losing his place.

The man sits in his car, eats his egg sandwich.
At home, he changes out of his worn tee, combs
his thinning hair and puts on his good sneakers.
This father surprises his kids at school taking them
to lunch, but not before hugging and telling each
he loves them. On the way to the diner, a young
driver cuts the man off as they both turn into
the parking lot. The father rolls down his window,
turns up the volume, calls him a “son of a b—-.”
He rolls up his window, turns to his kids
and says, “What can I say? I’m trying.
When we get home, what do you say
we start a swear jar?”

hover near pristine balsa wood benches. One cherub
beckons me, tip-taping the top of a large granite stone.

I move nigh- but am shy an arm’s-length. I depart,
bypassing the sepulcher, adrift like a cirrus cloud.

Strength in my endeavor is insufficient. Hence, I miss
a secondary venture- by a foot, although my feet

I use not. Henceforth, alone I succumb to malevolent
imperious impetus. Woe is me, for I lose sight of

the mark, and am away, through eternal blue ether.

Loneliness, I think to myself
Stretching to hear a faint train whistle on a faraway track
Empty spaces with dear ones so far away
By miles or spheres or realms of existence my voice echoes
As I say hello to a wrong number
It is nobody
I am nobody
A still small voice whispers, Be Still
My internal family, I think to myself
Full of names and faces and voices
Filling empty spaces with tenderness and anger
Compassion and injury- they know me
Like I know myself
I am somebody
We are somebody
I am reminded, I am a house full
Of sweet girls and mischievous boys and all-knowing teenagers
And babies standing in their cribs with arms extended
These are the speakers and arguers
The savers and rescuers
Filling in the empty spaces
An amazing grace
For I know now
I am never alone

V.A. Rivera enjoys herbal tea, dark chocolate, yoga, cats, and flower nurseries. Poet, essay writer and past participant of The Loft Writing Center and The Writing Institute at Sarah Lawrence College, V.A is a retired NY State educator whose poetry has appeared in GLIMPSE a Literary Magazine, as well as early work in New Millennial Poets and Voices/Voces A Magazine of the Literary and Visual Arts.