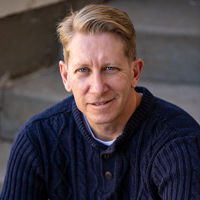 a young frog makes her home
in the backyard pond

beneath the stone water feature
unaware that every summer

until consecutive hundred-degree
days heat the water to the precise

temperature at which frogs
die and float to the surface

pace between rows of seats
in the boarding lounge fifty

between Auckland and L.A.
suspended above the Pacific

There are too many miles
to travel; too many hours
on a plane. They’d rather
spend holidays elsewhere;
they simply don’t care

to see where we live.
Here is not their cup of tea;
they’d rather save their money
for something more exciting.
We’ve only had one visitor

in the past twenty years.
That’s what you get for moving
to the other side of the world.
Perhaps we’re not as close
as I’d like to think we are …

we always visit them anyway.

Nathanael O’Reilly is an Australian residing in Texas. His poems have appeared in journals and anthologies in eleven countries, including Antipodes, A New Ulster, Australian Love Poems, Cordite, FourW, Glasgow Review of Books, Mascara, Postcolonial Text, Snorkel, Tincture, Transnational Literature, Verity La and The Newcastle Poetry Prize Anthology 2017. He is the author of Preparations for Departure (UWAP Poetry, 2017), named one of the “2017 Books of the Year” in Australian Book Review; Distance (Picaro Press, 2014; Ginninderra Press, 2015); and the chapbooks Cult (Ginninderra Press, 2016), Suburban Exile (Picaro Press, 2011) and Symptoms of Homesickness (Picaro Press, 2010).