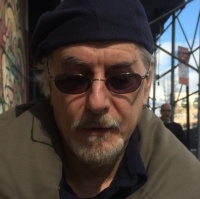 “The Biology of Courage”

My name is Jull Soares and I am a bastard. This is not a particular opinion that I, or anyone else that I’m aware of, has placed on me. It is objective truth. My mother was an unlicensed sex worker and neither she or I have any inkling of who fathered me, although a couple of gringos are among the suspects.

There is nothing more painful than longing for things that never were. Many of my friends grew up with fathers and when I was young, I was very jealous. However, based on what I’ve witnessed in films and in real life, it doesn’t seem that I missed out on much. If you are loved—it doesn’t matter by whom or how many—you’ll be fine as long as you feel worthy of being loved.

I am old now, but I do not think that I fear death. Sometimes I get upset that while I am rotting in the dirt others will be drinking beer and dancing, or laying on a beach with closed eyes, caressed by the sun. My love of history has been an enormous help in smothering my panic of not being alive.

Ever since I was a child, I’ve adored hearing city elders tell stories about Cartagena. How my ancestors fought and killed the Spanish invader Juan de la Cosa when he tried to steal a 132 pound golden porcupine from our Sinu temple. And how we citizens repelled an attack of the English armada that included George Washington’s half brother Lawrence. Or when the great North American female matador, Patricia McCormick, one of the finest bullfighters of her time, slew a bull at the beloved Circo Teatro. Streaked in blood, she knelt by the animal she just killed and stroked its head while screaming out, “I love this brave bull!”

I can accept and enjoy that all these events took place without my being alive to witness them, so why should I regret events I will be unable to experience after I die? I have come to believe that when we die, we return to wherever we were the year before our birth. As I was born in 1959, I will simply return to whatever I was doing in 1958 and that’s where I will be for eternity. There seems to be very few second chances in life and I suspect the same will be true in death.

I like lying on this ledge, becoming part of this glorious mural. I feel as if I’m a horizontal recruiter enlisting pedestrians to take some time outs during the day and not to fear exposing themself in public. Often kids, mostly teenagers, come over and tease me that I look dead when they shake or kick me into awakening. I can appreciate their concern or forgive their mockery, but I don’t like it when they pee in a wine bottle and try to force me to drink. Or pour it over me while I sleep.

Sleeping in public can give you interesting insights into human nature. It’s been my experience that the good are pretty evenly matched with the bad, although it does tip a bit more in favor of the positive. Many people think I’m just a homeless misfit and don’t realize I’m actually giving them a chance to join me in creating a temporary public family. Compassion and cruelty is what I frequently dream about while I sleep on this beautiful ledge, and is what I often wake up to.

Since I was a child, I’ve always hated shoes. Most men like to appear tough. If a person really wants to be tough it must start with their feet. Our ancestors probably went tens of thousands of years travelling in their bare feet—tough, grizzled, calloused—but not indifferent. Growing up without family except for my mother, I don’t think of being shoeless as a sign of poverty. I am walking in the footsteps of my ancestors where each step I take is headed in the direction of a family reunion. The soles of my naked feet scrape along the same paths where the souls of my forebears once walked. Please forgive my clumsy attempt at poetic wordplay, but it is a holy trail.

A human head should always be cradled. That is why I always carry a pillow in my pouch. A good pillow allows you to dream in color. My pillow is very old and even when I wash it has a distinctly peculiar smell to it. That’s because of the many beautiful dreams and disturbing nightmares burrowed inside it. My sweat and tears puddle into the stains of my life. A kind European visitor once told me I should consider my pillow as a work of textile art. I’m not sure what that means, but I like how it sounds.

It is a pillow almost as old as me. My mother made it for me when I was still “shitting yellow” as she used to like to say in her colorful way of labeling me a baby. Each day I ensconce myself into this bright yellow mural, beneath a stunning young woman with legs spread, as if birthing me onto this ledge.

Freedom is isolation. Slavery is the obliteration of isolation. I abhor flophouses, government housing and charitable hostels. Once you lose your ability to desire isolation, you become a slave. Creativity can only flourish in silence and solitude. If I was in some kind of forced shelter do you think I would be writing in this notebook and accompanying these words with images torn from magazines, newspapers and catalogues? The European woman who told me my pillow was textile art also said that I have a collagist mentality when I showed her a few of my notebooks.

Do not pity me as homeless. Celebrate me as one who possesses the special gift of being able to live alone. Sometimes I am forced to enter the dark doors of slavery, but I maintain the wherewithal to escape back into freedom and return to this colorful ledge.

And so here I lay, precariously balanced between moments of exaltation and the fear of being disturbed. In between those two points lies the secret to a healthy and productive life. Boredom is not having nothing to do, but feeling like nothing is worth doing. No one volunteers to experience life. We don’t have a choice. That is why anyone who completes this journey without taking short cuts is heroic.

Can you spare a few pesos in support of a pilgrim’s progress?

May you be spared a life of inertia in motion.