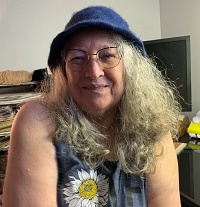 They Came. They Saw. They Left.

Driving through the soft rolling hills of
Arkansas at 3 AM we saw the speeding
lights of a UFO cross the next ridge, hesitate,
then flash into the unknown universe.

We missed our ride. They’d gone on
without us, but perhaps they had others.

Damn, to speed into the stars
join coalitions of aliens
the glorious adventure of it
races through us as we stare
after the contrails, gasping
as we collapse
emptying wishes into the skies
begging them to wait

sure, some movies destroy the
Earth with ETs that chew us up
and spit us out or cook us for dinner
but these aliens that check us out
and take a few and leave,
they’re like Picard and Kirk and Janeway
but with wiggly antennae
well intentioned
teaching and learning
lifting and edifying

at least one can believe so

I was 16—married December 20th one year and the next year on December 30th, a child was born—my first boy. I quit school after 8th grade. A wife to an ex-Navy sailor in Chicago. WWII was over, and the economy was booming. My husband was 22 and feeling his oats. Rowdy and drinking; going out with friends. Having jobs; losing jobs. A year later, December 18th, we had a baby girl. And now we were a family of four. Nowhere to live; no money to speak of. We went back to my parents’ home. Cincinnati, Ohio. But there was a catch. I had to give up my beloved piano or my pa wouldn’t let us move in. No choice really. He was a hard man. So, I did. I was carrying our 3rd child. But always chubby, no one knew.

I did not know my mother. Could’ve been the times. “Spare the rod and spoil the child.” “You’re not their friend; you’re their parent.” Could’ve been not enough time left in her day to spend with me…other children, other tasks claimed her notice. There was no knowing.

Life was a bitch at pa’s. But my husband got his feet under him. Got a job back in Chicago. And a place for us to live. We were able to move out. Out of that place where we were under that old bastard’s rule, that old bastard who backhanded me across the room if I spoke up. Anyplace would be better.

So many novels of mothers and daughters being best friends, sharing lunches and confidences or, even mothers and daughters always at odds: the mother demanding, the daughter not good enough. But what of the families where mother and daughter never talked about anything more momentous than what time do you need the car?
Lunches? Never. How uncomfortable that would have been. Nothing to say to each other; long pauses waiting for food.

Back in Chicago, we were better off but a 3rd kid? Our doctor said he knew a couple who were desperate for a kid, who would pay a lot so we’d be able to get rid of some bills and take care of the family we already had. It was tempting. We did it and no one knew what we’d done.
Later, much later, when TV shows talked about adopted children and how they fared, we changed the channel. There was always guilt. But when that lost daughter grew up and found us, I welcomed her with open arms. I wanted to know her.
My husband did not. He made her promise not to tell our other children who she was or what we’d done. He never spoke to her again. But she and I wrote lots.

Could it have been guilt that built a wall between us? The absent child given away at birth…another daughter who was a cost too much to bear…Given away (“sold”) to a family, childless, desperate, common practice in the days following WWII when baby boomers were born in droves and families were stretched too thin to feed yet another.

And so, we had our little family, one boy and one girl and tried not to think about the one we gave away.
The job lasted; we saved money and bought a house in a suburb. Life was good. The neighbor women became my friends.
My husband worked on the house, making improvements.
I kept the house, cooked the meals, took care of the children. So much better than Cincinnati.

9 years later, I got pregnant again. This time we kept the girl.
And 2 years later, we had another boy. Our last kid.

Menstruation finally became a topic as I became of age. Mom gave me a booklet and said to read it: How the female body works.
It was an eye opener for sure.
Did I have any questions? (She couldn’t look me in the eyes.)
I took her cue and demurred silently.
And when the day came and there was blood in my panties, I told her, and she gave me pads which were pretty much self-explanatory. All very hush-hush.
No coming-of-age ritual in our house.
Just whispers and silence.
A feeling of shame for being female.

And maybe that’s what kept my mother silent. A feeling of shame for being a woman. Or maybe shame for giving away her third child and then having two more. She passed away before anyone found out, so she never had to answer for it.

And we never got answers for it except from my father who lied at first to protect her and then spoke the truth which was unsatisfactory. A family that was broken when she died was further destroyed by a new sibling.
For being so silent and behind the scenes of family life, she was the core for my father, for my siblings.

For them, not me. I never knew my mother.

We kept our secret til after I died. I’m glad I never had to explain to the kids. Though there were some things I had to answer for. A few months before my death, my oldest girl was getting divorced and on her own. She suddenly became friendly. She started coming over every Sunday. She talked to me about everything. She took me out to dinner. Really made me nervous. Of all my children she was the most different. All the others dropped out of high school. She went on to college and graduated. She never got in trouble with the police. Never got into drugs or drinking or anything on the down low. I was always helping the others with money or rides or support. She never needed me for anything. Then one day she asked why I had ignored her. She said she always felt guilty that her brother got in so much trouble and she didn’t. She felt that everyone looked at her like she was an outsider. She cried. She didn’t belong. I didn’t know what to say. I said nothing.

My first marriage ended, divorce ensued, and for the first time I was living alone.

I knew my father (you were wondering I know). Mom was a cypher.
Every Sunday I went back home. Had dinner with them. Talked with her, tried to draw her out. Took her out to dinner and a play. She was accepting but uncomfortable. What did we have in common?
Not much. How sad I felt. 6 months later she was gone. And now I’ll never know.

Finally, I lay in a hospital, head ablaze in pain, knowing somehow that I wouldn’t live through it, this burst artery, and I found the words.

You were always so independent. You didn’t need me.
I did love you, but your brothers and sister needed me more.
I’m sorry.

I hope I said it out loud.

Finally, as my Mom lay dying, she said I was so independent, she didn’t think I needed her. That’s why she spent so little time with me. But she loved me. Of course, the guilt washed over me. What a shitty daughter I was to make my mother feel bad on her deathbed. I said it’s okay, it’s okay, don’t worry about anything.

I hope she heard me.

Linda (Stormyfalls) lives in a world where ERA is the 28th amendment to the Constitution, Black Lives Matter, democracy thrives, climate change is taken seriously, and walls are built only to decorate not divide.  Linda has two books of poetry. Her first was called Coming to be. Her second is available on Amazon: Poems to Amuse, Bemuse, and Entertain. She also has had poems published in books (A Vision, A Verse Volume 1; All-Time Favorite Poetry Book; The Poets Choice; and On Earth as it is in Poetry, 2018 Anthology) and magazines (The Spoon River Quarterly, New Earth Review, Bardic Echoes, and The RTL Proxy). This year three of her poems appeared in Pandemic Evolution Days 1-100 with Matthew Wolfe.

TO OUTLAST by Michele Parker Randall