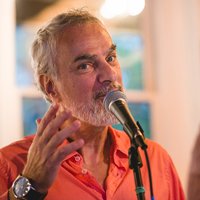 AND SO I BELIEVE
by Clark Holtzman

And So I Believe

A stranger stood next to me at the city zoo. I had stopped at an exhibit of sand and boulders, limbs and brush. It appeared to be unoccupied. The stranger studied the exhibit intently, nodding his head back and forth as though trying to catch a glimpse of something. The stranger said that you had to stand very still and look carefully but still you might not see the inhabitant of that savannah-like world. He said few people had ever seen one, invisibility being its natural defense against predators, but it was always there. So if one looked hard enough . . . The stranger said the creature’s scientific name was Semper absens, which made perfect sense to me. I stood very still, searching the recesses and the deep shadows for signs of the beast. Suddenly my mother, who had been listening nearby, said, “How cruel! Fooling a small boy like that! You should be ashamed of yourself!” She grabbed me by the arm and began to drag me away. The stranger, whoever he was, had vanished when I turned back to look for him. It was as if he had never been there. I thought I caught a glimpse of something among the boulders as my mother hurried me off to the next exhibit (of a family of gnus, I recall), a pair of bright eyes from out of the shadows. I thought I heard a voice whisper, believe.

When at the age of six, my Uncle Fred gave me my first haircut. He said to me, “Let’s play barber. I’ll be the barber.” And that was that. He started in with shears that seemed too big for his little boy hands. But I didn’t worry. My Uncle Fred’s hands have always surprised people. When at the age of four, my Uncle Fred could hold me in the palm of his much smaller boy hand. He carried me around the neighborhood concealed behind his back and then sprang me upon anybody we met. Mrs. Parrott nearly had a heart attack. Before long, snip, snip, snip, one side was done, but once the bleeding stopped we lost interest in the barber game, and so the other side never got a haircut. The thing I’ll never forget and for which I shall always be grateful is that first haircut. They don’t give haircuts like that anymore.

Reverie of the Noon Hour

Everyone in the office has stepped away for lunch. Everyone in every office has. The restaurants are packed, it’s payday for the pretzel vendor, the short order cook is beside himself with joy. The cloud that had anchored itself above our city shoved off for another locale. It’s finally the warm day we’ve waited for and you can hear the sounds of chewing. As you read this, huge quantities of food are being consumed by people in the busy restaurants and out on the sidewalks, and this is something for the farmers and the butchers and the deliverymen to celebrate, for without a doubt this is why they do what they do for a living. As you read this, people are forgiving themselves and each other. And eating. Nobody feels bad about himself for an entire hour.

Gospel for the Day

I got into a heated argument and lost my head. It just separated and fell off, then rolled into a storm drain. The drain’s iron grating warned DUMP NO WASTE. RUNOFF FLOWS TO JORDAN. I chased after my head but was too slow. I could only listen as my head plopped into dank darkness and was swept away. I thought I heard it still heatedly arguing the point before everything but the onrush went silent again. I can’t help wondering what will happen in Jordan when my head is discovered in the fishing net and Simon yells to his friends, “Look! As prophesied, we’ve caught a man!” Try as I might, I can’t remember what got me so worked up in the first place.

My mother was a handbag, or rather, the handbag that she carried with her everywhere, under an arm. Or rather still, my mother’s world was the world she inhabited inside the handbag. The world of the handbag that was my mother always closed with a snap if I got too close. I can hear the snap to this day, a sound that said private, and to keep out. I’ve tried to imagine the world of the handbag that was my mother, its zippered pockets, its secrets, but I can’t. Things would go into the handbag and disappear. Things would emerge, words, thoughts, tears and laughter, that gleamed in sunlight, but they remained mysteries to me. I can only guess at the world in which they existed. I suppose that’s what I am doing now, guessing. Something was in there, a person, a life, an entire world, but I never knew it, and now I never shall.