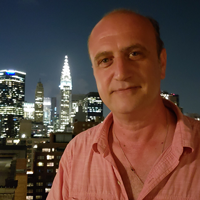 THE LAW OF SILENCE
by David Dephy

I am a firm believer
That as soon as a person stops lying
To himself,
He will be able to find someone
He can trust unconditionally.
And this someone is his own self.

When a poet bestows his words
To the whole world,
Every letter in every word is drenched
With his essence
That the world embraces just like it embraces
The world.

A flower “gives away” its smell
But asks for nothing in return.
It would have been unfair to have
A flower stripped of its right to “give away”
Its smell and to steal the amazing idea from it.
None of the stones lying around a fragrant flower do this.

None of them take credit for the fragrance
And pretend that it’s theirs.
It is safe for me to say that even stones protect
The law on property as they are content
With their own natural qualities,
Without trying to take over other’s.

How much more important is a human?
In the epoch ruled by the internet,
Contemporary literature is as exposed
And vulnerable as never before.
I’d like to say that everything is in your hands,
But someone ask me:”How about Lord?”

I say: “For the Lord has no other hands but yours,
my friend.”

The Law of Silence

He said: “Let me explain it once more,
The silence, like love, is the law of the words.
The silence is the clothes the words wear.
Anywhere, like love the human faith bears.
To define the silence with some other words,
The law of death is the life of law.”

He was my shadow during the war.
He was myself my personal law.
I opposed the war with my protest meetings
in the streets and millions of us like that only trees
are standing around – fronds in the black smoke,
foliage of heartbeats are covering the city
with their political action committee, through the spaces
between the words – the very home of silence –
every old man knows what the grace really is,
like the sound under stylus always timeless.

Smile in the Dark

Here is the door.
Here, in this dark cell
in this attraction-loving
stream of news
with its sustaining hatred
of ascetic life,
and its plans to ruin the gentle
person, the free person, and here,
in this revelation’s last word,
is an uncanny capture of the political tone,
when the light of redemption is already gone.
An amazing assumption of character in which
the delicate adjustments of life are revealed
by the breath of silence.

Yes, I smiled, no doubt,
whenever I passed the dark place
and opened the door, but who passed without
much the same smile? Yes, I smiled no doubt.
I gave command and the darkness disappeared
there where silence stands without any fears
and it’s so alive, yes silence stands here.

You told me one day – I am your song,
Your breath is the song and the song is like me,
Children are playing – soon calmness will come,
I feel your breath in front of the gate,

So, let me sing in your transparent breath,
Be like the wine in your divine veins
I am wishing to let you hear the song – as I am
And let me so please you – you know I need this too

So near and not far… Almighty and calm…

Eastern star is trembling all over me
And also all over you – we hear and we see
The spirit of silence within our breathe
Oh yes which we take and yes, which we leave.

The Manifest Alpha and Omega

I will never understand the world where:

The Life is the Death.
The Death is the Love.
The Love is the Lie.
The Lie is the Truth.
The Truth is the Shame.
The Shame is the Freedom.
The Freedom is the Rudeness.
The Rudeness is the Disposition.
The Disposition is the Problem.
The Problem is the Existence.
The Existence is the Belief.
The Belief is the Demagogy.
The Demagogy is the Experience.
The Experience is the Sin.
The Sin is the Wisdom.
The Wisdom is the Devil.
The Devil is the Angel.
The Angel is the Myth.
The Myth is the History.
The History is the Past.
The Past is the Being.
The Being is the Illusion.
The Illusion is the God
And the God does not exist.

David Dephy – The trilingual Georgian/American poet, novelist, essayist, performer, multimedia artist and painter, and the founder of the first Georgian poetic order Samckauly. He is the author of eight novels and fifteen collections of verse and three audio albums of poetry with orchestra and electronic bands. His short story “Before The End” was chosen for the Best European Fiction 2012, edited by Aleksandar Hemon and prefaced by Nicole Krauss, and published in the U.S. by Dalkey Archive Press. His first book-length work in English, a novel All the World’s Mysteries, is forthcoming in fall 2019 from Mad Hat Press with a translation from the Georgian by Adham Smart.
In 2010 – 2011 he was an artist-in-residence at the writer’s residency Ledig House in Ghent, New York.
That same year Dephy was invited to participate in the PEN World Voices festival in New York City, where he presented a live poetry event entitled “The Second Skin” with Laurie Anderson, Yusef Komunyakaa and Salman Rushdie at the Unterberg Poetry Center, 92nd Str Y.
In 2012 he made his live poetry performance with quadraphonic audio system at the Abastumani’s Observatory of Georgia and in 2017 David Dephy was chosen as an Ambassador of Poetry by Austrian worldwide brand Julius Meinl in Georgia and his poetry and live performance The Poet King and The Easter Verses at the Peace Cathedral of the Evangelical Baptist Church of Georgia included in the Divine Liturgies officially.
In 2017 he emigrated from Georgia for a political reason and currently lives in New York City.
In 2017, David Dephy was invited by the Columbia University in the City of New York City – The School of the Arts, for a literary event. He made this event under the title We Will All Get Out of Here Alive and performed his poetry and prose.
In 2018 – He is the active participant of the American literary and artistic scene as a PEN American, Voices of Poetry.
His works has been anthologized in many collections of poetry and prose and has been published in the USA, Mexico, Germany, Brazil, Ukraine, Georgia.