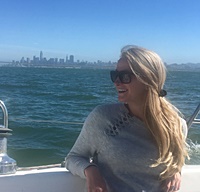 About the Author:
Carolyn Linck is an aspiring fiction writer, currently working on her first novel in her spare time. By day, she works in corporate communications for technology companies where she writes everything from press releases to product descriptions, blogs and ghostwriting executive op-eds. She lives in Chicago with her dog, Bailey.