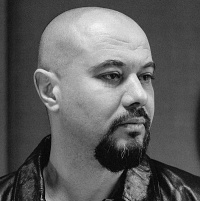 When I look back,
I always do it
not with a smile, but with astonishment
on my face. I remember the time,
when I was little kid and then
there still were old people who were from another time,
who still remembered the world
before the cameras, before electricity,
before the TV.

A world in which they had only one
old book and two newspapers,
when the word hunger was not just a word,
and the war was so real,
as Starbucks and Twitter are today,

but they continued to live in this new world,
so strange to them, and they slid like ghosts
between modern cars and children with large headphones,
and they walked with their heads down,
hunched and staring at the ground,
who waited to embrace them like a loving mother.

And at that time we started
going to parties,
the boombox jumped with electro music,
weed and vodka were the things we needed
to become real men, and we swapped stories
about who managed to throw some girl
on the sweaty mattress
in the dark basement.

While at the same time in an apartment below us
one of them was preparing to go to sleep,
without getting bothered with our load music and cries,
he was ready to dream again about the times
when there were no planes in the night sky,
no satellites, only stars,
from horizon to horizon, large and shiny,
calling for great journeys,
in a world which for them was one step away
from true perfection.

I am here alone
reaching out to the sun,
which hangs on a thin thread
in the corner of the sky, swaying gently.
Nobody else knows I’m here
in this white and primordial house
made of clouds, in front of the garden
of plowed shadows.

The wind is looking for his foggy keys
to sneak through the door.
Each stone outside is a captured David,
waiting to be carved out, every bone in me
belongs to someone else who has yet to
be born, every breath I take is already
exhaled by some dying creature.

I am here alone
and slowly growing old with a smile.
The tomatoes turn red in the garden
as the face of a politician on trial,
girls with the color of sparrows cross the street
and their laughter rise up and gets lost
inside the crevices of my blue childhood.
Suicidally beautiful boys, like angels, ran
over and fly away.

The rays of the sun’s octopus
penetrate the window and fill up the room
to the ceiling, the waves of time splash
and crash into the walls, a moth flies over
and disperses scents of silky old age, life
stretches from room to room, like a gold
toilet paper roll and then stops.

An old woman dressed in black,
stooped like the letter C, stands in front of
the door and whispers something to me about my life,
which I can’t fully understand.

Such nuances and
tinctures and shades are not
invented yet

Nothing else is darker than the depth of
your core

That is why
I light my cigarette and let the smoke
do the job.

Peycho Kanev is the author of 6 poetry collections and three chapbooks, published in the USA and Europe. His poems have appeared in many literary magazines, such as: Rattle, Poetry Quarterly, Evergreen Review, Front Porch Review, Hawaii Review, Barrow Street, Sheepshead Review, Off the Coast, The Adirondack Review, Sierra Nevada Review, The Cleveland Review and many others. His new chapbook titled Under Half-Empty Heaven was published in 2019 by Grey Book Press.