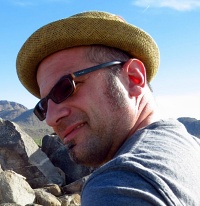 It was all on stall for a short while longer.  He’d put himself on stall.  This was one of the few options.  Now that his heart was broken and he’d wept in the wallpapered hallway with the echoing reverberations of his wails and sobbing.  Crying it all out there and then like a little bitch.  But no, that’s not how she would’ve seen it.

It’s natural that they were enemies.  They had to be enemies from the start.  Except they weren’t.  Instead she’d been a very good teacher and brought him along sexually.  She’d lost her virginity at 13 in her parents’ bathtub with her 14-year old boyfriend from down the block.  Somehow this moment was beautiful between them, she said, and I believed her.  I really believed her.  And I envied her because I’d had it so trite—my own loss.

She went to the Midwest and forgot about me.  This was six or eight or ten years later, after some other foolish first marriage of hers that I’d barely witnessed.  Once I think I played the drums with her first husband—or he played them.  He was always the most handsome man in the room, according to her, and he always licked his dinner plate clean.  She wouldn’t make him do this but she’d laughingly point it out.   She had fun with it . . . But anyway, it was after him that she left for the Midwest.  She left for one guy but ended up with someone else.  I was not interested in this someone else.  Except to say that, I should’ve been him.  It should’ve been me she was with—that was my feeling.  At least back then.  And it lasted for a long while.

He ate a ham-and-cheese sandwich across the table from her, some roadside diner.  They were driving somewhere upstate.  New Paltz maybe.  Not that far.  They’d spend that day and the next fucking in a rented cabin in the woods.  Something small and cozy and enticing.  Particularly for breakup fucks—their first real breakup.  And the final breakup coming next, just around the bend.  This fact impending and heightening their fucking.  Increasing its frequency and intensity.  But still, the sad feeling of a last time lingered.  A last time doing it—together.  Spent so beautifully though, it almost made up for it.

He sunk love.  He never impregnated her and he sunk love.  How didn’t he fuck his way into a family with her?  Maybe it was the motility factor.  Or her peach’s inner walls a bit askew.  Yeah, but that feeling, together.  And together, knocked-out fast asleep afterward.  Then she’d hop out of bed in the middle of the night.  She’d set the alarm clock across the room for 3am.  A form of comfort and punishment.  She’d spring out of bed and feel comfort that she still had 3 ½ hours’ sleep time.  She’d punished herself by awaking and getting out of bed . . . and then of course she’d punish me.  I felt her fingers digging here and there.   Pushing and prodding.  It was better when she’d whisper her way through it.  Even though I was a man, she treated me like a rag doll.  A plaything.  And for 2-3—sometimes 5-10 minutes—I’d let her.

She was stretching the time, trying to make the ragdoll time last longer.  The middle-of-the- night plaything punishment time . . . He was asleep—that is, I was asleep.  I was fast asleep.  But, after the alarm, she’d jump back into bed roughly, bouncing the mattress.  Then I’d feel her hand like a spider wriggling down to me.  My junk.  She’d finger walk the penile periphery with the slightest, subtlest touch.  She’d blow softly in my ear and whisper things—‘dirty,’ erectile- inspiring things.  I’d start getting it up . . . she’d pull away.  The punishment.

The tissue touch was next.  The draping and brushing of a tissue.  If I got excited again, the tissue was abandoned.  She might swing down to my mid-section then, rest her foot on my shoulder, near my neck and face.  She’d put a little pressure there, the slightest.   She’d blow across my pubic hairs.  She’d blow on the patterned head.  Then maybe the other hand and fingers—going suddenly for the rough stuff.  Maybe if I didn’t feel like it that way, I’d wrestle her.  I’d take her down.  And then she’d open her slim sweet legs, ready.  A quick-thrust insertion, her wet hiccup, my groan.  Then rocking.  Then rocking and rolling with a kind of innocence like it was the 1950s.  And doing it so sweetly until it could be done no more.  And loving her—and loving fucking her—and loving her . . . so true.

She’s in another state now.  She’s still in that other state . . . all these years later.  But we’ve started the slightest re-interaction.  Digital, of course.  Simple old-fashioned email.  With long gulfs of time in between.  And the slow—the very slowest—and unacknowledged mutual seduction.  Unintended even.  But there . . .  And something to bring them back together.  It’d be improbable for them.  It’d be dangerous and destructive.  Technically illegal.  They hadn’t lain in each other’s arms since ages 18-21, the kingdom of fuck.  And love.  That best-of-times time, together.

But the staller breaks.  I am the staller and if I go to her, then I am with her.  And we’re together again.  For real.   A couple . . . But no, it’s just a flurry of memories.  A flurry of rememberings and time spiraling and reoccurring.  Yes, time coming back—in an emotive way.  A wildly emotive way that is not time per se but mixed memory and desire, other unconscious intangibles.  And so, the staller got caught up.  Inspired even.  Something instead of nothing.  Written.  To her . . . The staller breaks.

She’s painting my face then.  We were in the bathroom, the same bathroom in which she’d lost her virginity.  This was five or six years later.  Not that many years, but she was legal now and so was I.  And she painted my face and glued on the exaggerated single false eyelash.  Then the bowler hat, the combat boots.  Let’s not get into it.  It was Halloween and she painted her lips blue like a succubus.  Like the succubus of dirty dreams that I’d asked her to be—if just for Halloween.  Our first Halloween, together.

She didn’t call me A—.  But fuck it.  We hit the city and dance clubs but they wouldn’t let my club—a stickball bat, wound with black electrical tape—through the front door.  I could bash it over someone’s head, they said.  Yes, I could.  But to what end, exactly?

Her tongue was super long and darting that night.  It slithered all purplish and lapping.  She was more fatale Bride of Frankenstein than succubus.  She was half robotic too—or in photos.  How she appeared in photos from that night.  With her frozen stare and stiff-limb stance.  A different kind of succubus, oddly mechanical and perplexing.

She’s there now.  Far away.  What am I supposed to do, here, now?  Claim auto-fic—if this is that?  I don’t want to go there.  But there’s some concern that someone will know the truth.  I’m probably not that someone.  I’ve been living in an off-kilter reality since they started the dead reality.  Or since I became aware of it.  Did I tell you about the dead reality?  I told you . . . The dead reality’s what they made of it.  The world.  And it was there in my heart too.  It’d overcome everything and was how we lived now.  No choice.  The authentic had been excised.  An array of algorithmic soul surveillances.  More than that even.  In the dead reality.

But anyhow, up in Michigan.  She’s in the LP.  Or she’s in the UP.  Some such peninsula—it’s sad.  Somewhat sad.  If a half-moribund guitar started playing . . . the story’s music.

And so I’ve reached out to her twice so far.  Without her acknowledgement.  She’s gone screen quiet, after our little re-interaction.  Our little communicative buildup.  I don’t blame her.  There’s a fire here, between us.  We could burn each other up—burn up our current lives and lifestyles.  Burn up how everything’s middle-aged and in place . . . Burn up our status quos.  But we could also go farther than we’ve ever gone before.  If such a thing exists—and could happen still.  And matter . . . And the staller breaks.

Her current husband’s invisible.  I don’t think about him.  I don’t even remember his name.  He’s Average Joe.  He’s fine.  He runs an office-cleaning business in wherever Wisconsin.  Whichever state.  Works all night, managing and dispatching office cleaners.  Making a living . . . But this is folly.  The whole thing’s a farce.  Just a way to gnaw and feast on yourself.  On myself then.

When first love goes away, it becomes first loss . . . First vital loss.  A kind of gone-pain feeling that you inevitably feast on.  Then it diminishes and, if you’re still not over it, you feast on yourself.  But emaciated and lean in leftover feeling—so not much of a feast.  Maybe an inside-out and a nothing-left feeling, in the long-run.  The longer run.  Staller days.

The question was how did she spin back into my orbit?  After so much time had passed, so much distance, different lives, different states, different directions, so how?  But the how doesn’t matter.  That’s not the crux of what’s going on here.  The crux is will you or won’t you?  Will you hold your static position—stalling—or will you break?

The story goes from first- to third- to second-person narration.  Everything that you should never do.  It’s best not to be aware of it.  It’s best to let it come as it comes.

I will reach out a third time.  I’ve done it twice, to no avail.  Twice in a number of weeks.  Maybe five weeks, maybe seven.  It’s been a longer than expected silence, on her part.  I’m a little disappointed.  But no matter.

The staller breaks—away.  I break away from these hampered and hampering thoughts.  These needlings and obsessions.  These awry semi-factuals. . . . The dead reality.  And the insistence, maybe the personal insistence, on such deadness.

That girl, the one I almost married and had children with, she has a name.  She lives in the LP.  Or the UP.  You know the state.  Blame auto-fic. . . . But she has a name like Whitaker or Williams or Wilson.  Or that’s the last name.  The name he gave her.  Her first name is Bunny.  No, never Bunny.   It’s Lotte.  A diminutive of Charlotte.  If her name has been Charlotte all along, I never knew it.  Or I only knew her as Lotte.  And Lotte loved me.  And I loved her.  Once upon a time.  The staller breaks.

But that’s what happened then.  That’s what went on, and down, then.  And it was a kind of pre-cursor to the dead reality.  But no, it was really the tail end of the living reality.  Of being in a certain millennium that’s showing the last waning signs of life.  And then about 30 or 35 years into your own personal journey, your life, the whole thing collapses.  The proverbial sky falls and the dimness of the dead reality overcomes.  With a certain permanence and totality.  And its only enemy is love.

But no, other things are here for us.  But maybe it’s not for us.  Maybe I’m just dreaming still.  Or stalling.  Yeah, stalling.  And so, no staller breaks.  Except to love.  Or except, to love?  A question, maybe.

But what kind of question?

Philip Brunetti writes innovative fiction and poetry and much of his work has been published in various online or paper literary magazines including The Boiler, The Wax Paper, and Identity Theory. His debut novel Newer Testaments, published in November 2020 by Atmosphere Press, has been described as ‘an innovative existential novel told through hallucinatory poetics’ and is available for purchase: (https://www.philipbrunetti.com/)