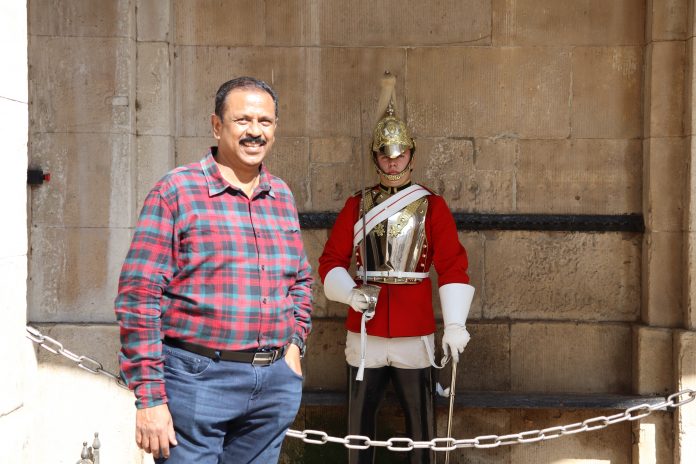 I love cooking and travelling. Been to Asia. America, Australia, Singapore and loads of nations in Africa, that I love the most. Been in Kenya for close to four decades and am still falling in love with it every day.

Honestly, I can’t remember but I do know I was an avid remember from a very young age and did write in school and College magazines. From possibly the age of 10 or 12, I was into Sherlock Holmes, James Hadley Chase, Mario Puzo (The Godfather) Alistair Maclean, (Ice Station Zebra, Where Eagles Dare,) etc.

THE LAST CRUSADE is set in the world of today-the intense Islamophobia and its effects sin America in Europe. Drawing from real events of Islamic terror as it manifests in today’s America and Europe it plumbs the fictional possibility of wealthy far right men of great wealth and power attempting to alter the course of history by their xenophobic proclivities. The book salvages the faith of humanity, when an ordinary ex-Vet, who in his attempt to gain justice for the ruthless murder of his wife, ends up bringing down the evil cabal of power mongers and saves the world from nuclear holocaust.

It took me a 3-4 months to research the locales-US, Bavaria, London and numerous cities; mansions like the White House, Castles; Weapons, Homicide investigation procedures; instances of terrorism, Islamophobia, right wing extremism and so on. Though I have lived in the US for a year and visited numerous European cities, many of the locations and stuff I was writing about had to be researched in great detail from articles, You Tube videos and books. It was a challenge to do that and I enjoyed every moment of it. My next book is set in the Honduras’s, a country I have never been to.

Story telling is fun with the ideal research and imagination. If a writer can tell a tale without preaching yet use detail in a way that retains a reader’s excitement to turn the page, then it will tick. I hope I have managed to do that. It is my reader’s who will ultimately judge me. Though I hope not to take credit for it, I was touched when one Amazon Reviewer out of England said, “The great James Patterson has a rival”. I am humbled and feel it was way too high a mantle for me to accept.

I don’t have any goals of how many words to do in a day. Sometimes I can do several pages, other days I may spend ages on just a page trying over and over again to keep reader interest as I worked my way around intense details, say of weapons or attacks.  I finished The Last Crusade in about 5 months in all.

Nothing out of the ordinary. If you call it that, let me see….I may get up at night and jot down ideas as they pop up in the head, go back to sleep and sometimes wake up again to do the same as characters and events unfold, metamorphose in the mind. Sometimes change entire chapters, add or move incidents around, spend a lot of time in getting dialogues realistic doing a monologue playing characters against each other and getting the said and the unsaid realistic, and so on.

Sometimes I’d write continuously for days on end and then may stop for a week or more before I pick it up again. Guess waiting for the muse as it ebbs and flows, rather than contrive art.

I am an artist and used to draw and paint but must confess have not been able to dabble in art for quite some time. Will get an easel and try out something someday. Love natural scenery, mountains, oceans and the endless expanse of greenery, trees and the explosion of color in a garden.

Frederick Forsyth books like The Day of the Jackal, The Dogs of War, The Fourth Protocol, The Odessa File; Tom Clancy Books-The Hunt for the Red October, The Cardinal of the Kremlin, Patriot Games, The Sum of All Fears; Kylie Mills-Order to Kill, The Survivor, Free Fall; David Baldacci- Absolute power; James Patterson- Along came a Spider; Ken Follet-The Key to Rebecca; John Grisham- The Pelican Brief, The Pelican Brief…and such. The influences of Crime fiction and the whodunit genre had deep roots within my psyche.

Story of a murder of an environmental activist in the Honduras’s when she campaigns against powerful forces who want to destroy the indigenous way of life. I was inspired on writing this book on the true story of, Berta Cáceres a Goldman Prize winning Honduran environmental activist, who was brutally murdered in 2016 for her stand against the construction of a hydroelectric dam by suspected the hitmen of the dam construction company. I also wanted to project a female protagonist in a male dominated world of heroes. So i have a woman, champion for justice in my book.

If I can help jog thought in at least one reader to think of unity in a diverse world made up folks of all walks, creed and color rather than extremist cubby holes of xenophobic dogma, I would be deeply grateful. If those whose minds I am able to touch are influencers who can move populations to deter from extremism it would be out of this world.

Hang in there. I almost gave up but hung in there for five years and a thousand rejections. Mark Malatesta, a Bestselling Author, was my rock of a support and asked me to hang in there. I shall forever remain indebted to Mark.

Also, the bulk of the Agents who rejected always told me publishing was a subjective field and told me there would always be someone else who might pick up my work-till Stevan of Adelaide Books, NY came along and I am in debt for all time for publishing my work.

I had written off to many established writers and I am humbled by the fact that my query was read and was encouraged with offers to read my galley copy should I be published from great writers like David Baldacci, Kyle Mills, Ward Larsen, Tim Tigner, Nelosn De Mille, Marc Cameron, John Gilstrap, Alex Berenson, Jeff Abbot and Catherine Coulter. Catherine pointed me to use Strunk & White’s Elements of Style. Better she even offered to have my manuscript read by her Senior Reader free of charge!!

Have your manuscript read by someone. Pay for and have it proofread by professionals. I used Laurel Robinson. Even the best writers may miss a punctuation or make an inadvertent error that a random spell check may miss and even have unintended inconsistencies. Laurel is very meticulous in her work and I remain grateful to her.

Thirty to forty books. Crime fiction and thrillers of the Clancy type is my genre. The craftier the plot, the greater the pleasure in unwinding he gordian knot of resolution.

The message. All the research, all the woodcraft and all the thrill of the tale, does not make sense if the message does not help change at least one person to do the right thing.

It’s hard for newcomers to get a break into the publishing industry. Agents are overwhelmed by several thousand queries. There should be newer and easier ways for both Publisher and Authors to come together than by the fleeting chance that an agent might pick up the first punch line of a query.