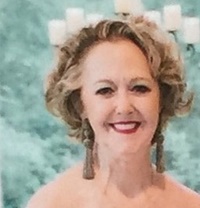 My eyes adjust to the darkness,
a darkness crowded with antiques splayed in discord.
Candles silhouette artists’ legacies rendered as torn war offerings.
Lệy allows me to wander, willing me farther into the somber darkness.
I weave a path into the tenebrous light, ginseng incense floating in the tight space.
Five orderly shelves climb the wall of the tiny lair.
A small round sphere perches on the top shelf.
Toes straining, arms extended, I stretch upward.
My fingers feel coolness and enclose the smooth object.
Pulling the vase near the edge of the shelf, I join the roundness.
Holding it, I see the bright yellow hue, glaze upon glaze,
perfectly polished as varnished velvet.
A pungent odor radiates from the vase.
A sickly saccharine odor floats from the next room.
Behind me, I sense Lệy’s fear, intense, salient: I continue to stare at the vase—
the shelves blend into a single mass; my hands become formless clubs.
Spots float before my eyes, as looking into the sun.
I dart upward, to return the vase to its home.
I feel serenity return to Lệy.
An antique porcelain from the Xi She Dynasty, the old man says.
I glance through the colored beads hanging in the doorway, at the candles illuminating the next room.
My eyes are drawn to the flame and pipe, poised, waiting beside a bed,
drawn to his translucent expression, his ghostly complexion,
his pupils pinpoint razor sharp.
He turns to lead me from the alcove, through the labyrinth of priceless relics.
We return to the small shop.
I blink as the sunlight floods the windows and the busy street.

D.H. Lawrence wrote in Taos, up among the gods, close to the sun,
caressed by blue spruce
trees pointing to heaven, arrows barring reality.

Oh that I could climb piñon on ladders up to God
GOD IS HERE: CHRIST IS NOW
The Manticore speaks these words and I concur
perhaps now to rest, then to sleep and be at peace
away from dreams of frustration
fears of failure
away from nightmares of death

Tintinnabulation of mission bells brings the poet back to the present

Thirty years have passed. The war grows cold and ancient.
Buildings replace napalmed earth.
A new generation of street children roam Tư Dờ.
The red-brick church calls my name.
Come inside and take refuge, it begs.
In a sea of black hair and curious almond eyes,
I fall in love with you again.
Anger fades in the cacophony
of blue taxis and motorcycles.
I see you again in the glint of gold and lilting roof tops.
You are once again mine.

Towering banyon trees create a canopy in the decaying wat.
A womb of wonderment, massive roots running wall to crumbing wall
claim the sacred sight.
Namastè, monks chant in the ancient forest.
May you be filled with love and kindness; may you be well.
Climbing the worn, narrow steps atop massive temples,
I peer over miles of jungle and spy tourists clinging to jagged limestone,
elephants lifting logs of teak wood.
High in the clouds, I feel the thrill of danger and pray my exit is joyful.
Like the blind, untethered, barren,
I search for decades and find you in the morning sun.
At last I can fly with you.

As winter’s face becomes spring,
we are reminded of God’s presence in our lives.
Bonny Bauman Chien

I weave the Gadamerian net though Plato’s beard
and say the words to prove what there is not.
I build my tower, pebble by pebble,
rocks and seaweed garnered from Asian shores.
I climb the tower and stately view St. Stephen’s cross.
I write the words beneath my eyes, inside my skull,
seer them until flesh is ash.

You live in Plato’s cave beneath Odysseus’ sheep,
safe from the light and taunts.
I long to go with you,
into the silent, good night.

A World Without Objects Is a Sensible Emptiness*

Frantic, I race back to the house. Keys jammed in the slot, the door opens.
I dash to the jewelry box and slip on the heavy, gold bracelet.
In my fury, the clasp nicks the armoire, bruising my wrist.
I am once again connected to you:
your name in raised letters, heavy on my arm,
an albatross from your quick, clean death.

Your lifeless arm dangles, blood
trickles from your lips as they set in peaceful repose,
warmth fades from passionless blue eyes.

I put on your bracelet, a dream-past, doomed to your
razor’s edge existence,
an endless Odyssey
praying the sniper’s bullet reach another mark—
to join us again.

*Title from Richard Wilber’s poem of the same title as Thomas Traherne Second Century, Meditation 65;
“Life without objects is a sensible emptiness, and that is a greater misery than death or nothing.”

Kay Merkel Boruff lived in Viet-Nam 68-70 & was married to an Air America pilot who was killed flying in Laos 18 Feb 70. She graduated from TCU with a BA in English & Education; & from UTD with an MA in Humanities, publishing her thesis “Constitution of Advanced Objects: A Theory & Application. Her work has appeared in the New York Review of Books, Vanity Fair, Texas Short Stories 2, Taos Magazine, The Dallas Morning News, and the Wichita Falls Record News. In addition, she has work in Suddenly, Grasslands Review, Behind the Lines, Fifth Wednesday, Adanna, Stone Voices, Turk’s Head, Calyx, Meat & Tea, Concho River Review, West Trade Review, Offbeat/Quirky; and Paper Nautilus. Letters of her husband’s and hers were included in Love and War, 250 Years of Wartime Love Letters. NPR interviewed Boruff regarding her non-profit Merkel & Minor: Vets Helping Vets: A Class Act Production. She attended Burning Man 2012 and then climbed Wayna Picchu in Peru on her 71st birthday. Her novel Z.O.S. is presently being reviewed by several agents. To contact Miss Boruff please visit
http://WriteInk.org
https://twitter.com/KayMerkelBoruff
https://www.facebook.com/KayMerkelBoruff
https://www.instagram.com/aunt_kay_merkel/