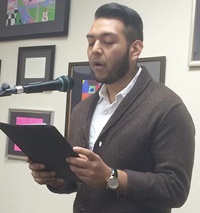 REVELATIONS OF A TEN-YEAR-OLD
By Saul Hernandez

Every Sunday I walk with Him. I knock door to door with Brothers and Sisters from the Jehovah’s Witness Congregation. It usually goes like this: we arrive around eight in the morning to the assigned streets, we then divide ourself into groups and go two by two, just like the animals that stepped into Noah’s Ark, to spread the word of Jehovah and his promised kingdom. BrotherAguirre says that we are doing good by bringing the word of God right to people’s front door. But they don’t always answer. Other times they open the door and see us and bam, they slam it on us; I wondered what it must be like to be able to close the door on something you don’t believe in.

Sometimes I day dream at church, I break the silence in the room with my laughter. I offend Brother and Sisters of the congregation who are giving a speech or the ones listening. My father looks at me and with his eyes whipping me again and again.

As if I’m not punished enough, at school I can’t even participate in fun things. I’ve had the same teacher since I was in the third grade and she has moved with my class all the way to fifth grade so she knows what I can and cannot do. My parents remind her at the beginning of each year that I cannot participate in birthdays, holidays, say the pledge of allegiance or anything that would be praising something that isn’t God.

Mrs. Balderrama sends me to the reading corner when these activities take place My parents don’t know I read about magic, time traveling, people choosing their own destiny, or about worlds that exists outside of this realm, like the “promise kingdom.”

I read all the The Magic Tree House series in the reading corner, but when I finished all 24 books that my teacher had bought I was sad that I couldn’t figure out what came next, so I made up my own ending where Jack and Annie, alongside Morgana, destroy the time machine and stop traveling across places and time, and they live a normal life creating and choosing their own paths; yeah, that would be nice, choosing your own destiny.

I found the Harry Potter series in that reading corner too. It was while my class recited the pledge of allegiance. This dictionary type book caught my eye. I took it home with me because I needed to find out about Harry’s destiny. Except his destiny was destroyed when my mother caught me reading it under the covers. My parents burned the book. They said I could not get sucked into the life of magic, people with powers, and wizards, Jehovah would not approve of this. I yelled and said, “The Bible is full of magic!” When has someone heard of  a burning tree talking to you or a man with the power to split a sea or even walk on water. My parents didn’t care. They were only following what the church had taught them: to fear the unknown.

The next day at school I was embarrassed to tell Mrs. Balderrama about the book. I waited until the end of the school day to tell her about Harry’s tragedy. I cried and told her I could pay her for the book by cleaning her desk or cleaning the classroom. I apologized to her with every sentence I said. At first her eyes were firm and full of fire, her eyes had a different look from the one that my father gives me, but then she cried with me. This was the first time I had ever seen an adult cry.

In church we learn to love all people no matter what. I think this is a lie too. When a person didn’t want to hear Brother Aleman preach at their door the Brother Aleman got red like a kettle and you could almost see the steam coming out of his ears and nose. It happened to brother Ibarra too. Except he stomped off of the persons lawn and stepped on the side flowers by the gate. I felt bad for the flower, it had nothing to do with the owner only the Brother’s anger. It was just there being a flower, is this how God looks at us, as only flowers in a garden waiting to be stepped on?

They also tell us at church that God is always watching us. I think of myself as an observer too. I wonder if he’s been keeping a close eye on me. I think he’s on to me.

Saul Hernandez is currently a student in the Bilingual MFA in Creative Writing at UTEP. His work has been featured in The Rio Grande Review, labloga.blogspot.com, xicanation.com, and in The Brillantina Project. He’s also the current Director for Barrio Writers at Borderlands in which, alongside other volunteers, teach a one-week free writing workshop for the youth in the community, so that at the end they may submit their work and get published in a yearly anthology through Stephen F. Austin State University Press.