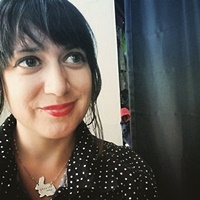 Grayson Miller lived a quiet life, haunted by a single summer that lingered in his memory like a ghost. He never tried to escape it, exorcise it, or shove it away, finding a cold comfort that it was there. A reminder of when he could feel something other than the dull ache of longing. It was the summer he started digging graves for the church, exchanging his hard labor for a small place to stay, since he had nowhere else to go. It was the summer he fell in love for the first time, the only time. Rebecca, from English class, from Calculus, came to visit him while he worked, perched on a headstone as he cleaved into the soil, creating the little pockets where people would hide their loved ones, their memories, their secrets. He would dig to the rhythm of her voice as she told him stories of life, postulating on how it would all end there in the deep pits he dug with a single shovel. He liked having her company while sweat rolled down his back in the heat. He liked the way she laughed at her own jokes and the way dirt clung to his fingernails despite his gloves. The way the scent of earth clung to him like a shroud.

Sometimes, late at night, Rebecca would stay with him in the groundskeeper’s cabin at the far end of the cemetery, where they would watch recorded tapes of old horror movies. More often than not, he’d fall asleep in her arms, too worn from work to keep his eyes open. She usually slipped away before morning, but the smell of her would linger in the small shack, lavender soap, deep cleaning shampoo, something different to sustain him before he returned to his world of grass and loam.

Autumn swept in with cool showers and burning leaves, nature beginning her slow march toward winter death, and Rebecca’s thoughts turned more macabre. She asked how he could stand doing something so morbid, day in and day out, and he thought about it while shoveling out a resting place for another unknown corpse. Eventually, he gave a simple, sincere answer, the only one he could think of.

“It makes me feel alive,” he said without a touch of irony.

Rebecca tilted her head, chestnut hair tumbling away from her shoulders.

“Would you feel so alive if you were digging that grave for me?” she asked.

He couldn’t respond, unable to imagine it, but he found his answer once winter set in. The ground was frozen solid, his movements limited by layers of clothing for warmth, a different beast than digging in the summertime. He hadn’t dug a grave for anyone he’d known before, much less someone he had loved as much as Rebecca. He didn’t feel alive that day, and he wished he could have told her so. Maybe it would have made a difference. Maybe she’d still be sitting on top of the headstones, babbling, instead of lying six feet under them, silent.

The warmth of summer crept back into his soul when the soil thawed and began to smell of rich decay again. Just as life returned to the trees and the grass and the flowers planted by dutiful mourners, it returned to Grayson. He started his day with a visit to Rebecca’s grave, picturing her perched on the headstones, chestnut hair tumbling away from her shoulders. He’d tell her about the movie he watched the night before, imagining himself in her arms as sleep overtook him. Then he’d hoist his shovel over his broad shoulders and get back to work, digging graves for the dead to help himself feel more alive, every day of his long, quiet life.

L.S. Engler writes from outside of Chicago, though she grew up chasing dragons in the woods of Michigan. She is the editor of the World Unknown Review, as well as the author of many short stories and a few novels, most recently the Slayer Saga, a trilogy about zombies. Her work has most recently appeared in To the Victor, Ghost Stories, and the Saturday Evening Post