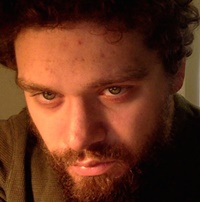 LATE AT NIGHT
By Daniel Senser

The clock is drunk and I’m too sober
To sit and listen to it unwind.
Each tick and tock of its time pours over
Like a wino spilling over the sides.
The rain is insane and so is my lover.
Sweet nothings soon become sweet somethings
In her rapacious mind.
Sex is a literal act, she says.
Like dying. The trick is to do it for another.
Love is wounded lust carrying a white flag.
Now every word I hear her speak sounds like “surrender.”
She sleeps beside me now, her memory transmuting dreams.
I’ll stay up all night and sprint my will against time,
Chase my lover’s dreams, blind, as I lie beside her.

Languid night. I am sitting on a dirty couch
in my back yard, listening to the whirl of the air conditioner
as it motors cool air into the house.
The soft spell of this machine is broken by another—
the clicking of a side door opening on its hinges next door.
Four people exit: quiet, unintelligible phantoms
lit by an orange lamp in chiaroscuro.
Out first comes a woman, her silvery wisp of hair
moving gently like fog over her sharp, lean face,
Her spectacles reflecting the orange light like jellyfish.
In her gentle British accent, she is saying her goodbyes
to three men in shadow, cheek kisses for all.
“Pleasure, gentlemen! I will call you from France!”
The three men go back inside, and she gets into her car.
I can hear it gently rumble as it drifts off into the night.

The moon is a coiled spring
Who’s made mastery of madness.
My tongue is like a moon
Orbiting a thought
Lighting the night with crazed soliloquy.
The moon up there has nothing to say.
He has said everything already.
If one listens, one can hear its echo
In the strange somnambulent singing
Of the star-gazing lunatics
Wandering these tangled streets.
With every phrase, the coil of the moon
Gets tighter. We sing its praises
And, bashful, it won’t surrender.
As I gaze, I mark a tear running
Down its face. Falling from its chin,
It becomes: a star.

To Write a Poem

To bury one’s self in tormenting silence
To withstand the evil eye of solitude
And the dragon’s fire of Not Knowing,
To peer like a suicidal man into the mind’s abyss
And then jump, remaining always conscious
Of something not yet there. To lose sight
Of all dreams and nullify all prayers,
To kindle fire in the back of your throat,
To have one’s neck wrung with the vice-like
Grip of a muse’s hands,
To die a thousand times inside each phrase,
To sprint headlong towards an oncoming train
And know that for every death your soul achieves
A thousand times over it will be saved.

For My Niece, Blakely Thomas

You fill my heart with sweet song and laughter
And kick up the old dust in my world-weary soul.
With all the spunk and pluck of a seasoned master
You reach out your hand and bid me take hold.
Together we dance the dance of the young and the old
And all that binds them together (it is, after all, the whole world,
Or so I’m told). Though my feet tread heavy
On the long and lonely road of my life,
They now step lightly in this dance of ours.
With gentle urgency, they serve as a guide
For your own. Where this music takes us,
No one can know. But you can be sure
That when the drum stops kicking,
And the fiddler plays his final chord,
I’ll dance with you again. You just say the word.

Daniel Senser has been writing for about twelve years, primarily as a poet. His writings have appeared in California Quarterly, Poetry Quarterly, Haiku Journal, and Jewish Currents, among other journals. He published a book of poetry about two and a half years ago entitled, “Chasing Crows.” Daniel graduated from the University of Cincinnati with a BA in English in 2014.