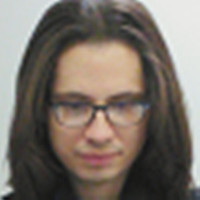 My mother stares at me through the wire mesh, not moving, breathing evenly. Taking notes in pencil, I ask her about my childhood, her previous marriage to my father and her current marriage to a physically abusive schoolteacher. Why she cheated on, and ultimately divorced, my father isn’t in question. The man is a pig. Cruel, loud, fat, drunk, obsessed with fishing. If he’d been a writer, a Hemingway of the Bronx, it might have been tolerable. But he was a witless sixteen-year employee of Verizon and this made it dreary and dull and explicitly ugly. I helped her leave him, packed her bags with great efficiency one afternoon while he was still at work. Yet I hadn’t any idea of what she was running to,only that she’d secured an apartment on Soundview Avenue, not terribly far, five minutes by car, but it was another world to me. Even the traffic lights blinked differently.

I pull up a chair and ask her why she chose this world. My stepfather’s world. She asks me why does any of that matter now. I say that it matters because she’s trapped in a 4-feet high, 10-feet long, galvanized, heavy-duty, uni-body chain link wire mesh cage. She tells me I’m just another man who tricked her.

I cannot recall when I got the cage—days, maybe weeks ago. I work part-time in a pet store. Assistant manager. I get some of my best ideas there.

I’m just like my father, she says. I take a minute to think about that—then I write it down.

She curses me, smacks the inside of the cage. I lower my pencil and she tells me she wishes she had listened to her mother and had an abortion. The pencil halts in mid-air, just above the sheet. Then I jot down a thought: get milk. Half-gallon.

I turn on the television and raise the volume, just in case she starts to scream. My father loves TV. I think it’s a spectacular waste of time. But it was here when I signed the lease. So was the furniture. A ready-made home for a high school senior on the run. First from my father, then from my mother and stepfather.

Now I’ve trapped her here. She can’t run but neither can I. At least not until I get some answers. Can’t go back to work or school without answers. Any answer will do, but she doesn’t know that.

Most people don’t understand her, are repulsed by her frequently bruised eyes and swollen mouth and defiant expression. They think she’s pathetic and crazy. She knows this perfectly well.

I ask her how can she continue to be with someone who once put a knife to my throat? Here it comes: the look. My mother has this blank expression—part doubt, part horror—where it’s impossible to tell if she’s surprised by something or is simply ashamed to hear it out loud. Either way, I’m not getting an answer to that one. Moving on.

She screams to be let out. Luckily, a potential American Idol contestant is caterwauling his way through Don’t You Cry by Guns N’ Roses. I like that song. So does my mother, if I remember correctly. She’s not enjoying it very much now though, and I ask her to calm down so we can resume. Surprisingly, she listens. She does that. Raises bloody hell, and then—surrender. It makes me sad.

I jot down a few more notes. Actually, I’m writing down the lyrics to the song. It’s finished—the English judge offering his trademark snappy and snide critique—but it’s in my head now. I think what I would give to know what’s in my mother’s head. Now Zombie by The Cranberries has replaced Don’t You Cry and its chorus of In Your Head In Your Head is smeared across my brain.

She asks if I want an apology. Before I can reply she tells me she is poison—it’s in her pores and breath and blood—when she touches certain men, kisses them, the poison seeps into their flesh. There can be no denying it anymore—she looks at me—obviously. She screams her apology and punches the bottom of the cage. The metal sheet vibrates for a moment, then is still.

I ask her to explain. She says she ruined my father by marrying him. It wasn’t a dream come true but it struck her with the force of change, everything would shift as it must, and he felt good to her. He was—she pauses here—an unremarkable man but also a kind and decent one. The drinking started before any hardship, before any tests that a married couple may face over time, certainly before my birth. There was no reason for it except that his life was now bound to hers. Even though they’ve been divorced for over three years, he will never stop. The damage, she speculates, is permanent.

My stepfather was a brave and educated man, awarded a Purple Heart for Operation: Desert Storm. He took her to museums and enjoyed leisurely walks through the quieter parts of Central Park. He was a thinker, not a drinker, she once told me proudly, amused. Then one day he hit her when he received a notice that she had forgotten to sign their income tax return, how they would have to re-file the whole damn thing and their refund, a substantial one, would be delayed.  She says she wanted to smack herself for the mistake but never expected him to beat her to the punch—the pun is intended, she assures me. As time went on, he found new and lesser reasons to strike her but the frequency of their sex increased. The sex itself wasn’t better, there was just more of it.

This should be hard for me to hear, there is, I admit, a chatter inside my skull. But I can’t stop writing.

My mother swears she has poisoned all our minds. She apologizes again and starts to cry. She hopes there is a cure out there somewhere and that I will find it soon.

We stare at each other, and she hits me with the doubt-horror-one-two punch. Her face is white as chalk.

Her eyes are roving back and forth. Something about my expression upsets her. She spreads her arms and inhales and screams, “Look!”

I see my mother in a cage. I see myself seeing her. I say her name. It leaves an odd taste in my mouth. I write it down and the taste dissolves halfway.

Suddenly I stand up and thank her. I ask her not to call the police when I’m gone. If she does—if she must—I will accept the consequences but I will also go into vivid detail about the events that led us here. I will insist on a polygraph so everyone will know what I say is true. The choice, as always, is hers to make.

Honestly, I’m not sure what she’ll do. Whatever it is, I only hope that she waits. Until tomorrow at least. Or tonight.

I ask her to move to the back of the cage. When she does, I unlock it. Then I spin around as I hear the door swing open. I close my apartment door and head toward the lobby. I slow down. I hear her take two steps, a third, from the cage then stop. I wait more than a minute, but nothing.

That my mother cannot think of a reason to move in any direction feels like I won.

My usual bus zips past when I exit the building. I realize I would rather walk anyway. The route was familiar enough so my mind was able to wander. I caught my reflection in several store windows. One of them has a TV switched to a local news broadcast. The mayor’s daughter is missing since yesterday. I pretend to believe this means the cops are too busy to worry about anything else today, but obviously I know better. I refocus on my reflection in the glass. A gaunt mottled face with stale grief. I won’t age well but I’ve known that for a while. I move down one street, cross another—no traffic—and down an alley that is often used as a shortcut.

I’m here. I unlock the front gate. I’m almost an hour early. Whenever possible, I try to give myself extra time. There is always a lot to be done before the store opens. I switch on the lights. The saltwater tanks buzz a bit louder than usual (some of the filters are not filtering), the puppies cry themselves awake, the parrots start vocalizing their (dis)pleasure, except the scarlet macaw who is too bored, too majestic, to respond either way. He’s my favorite.

I open the basement door and head down the stairs.

My father looks at me and says if I think this is the strangest place he’s ever woken up in, I might be right.

I tell him if a 6-feet high, 10-feet long 12-gauge heavy-duty galvanized chain-link mesh cage is the strangest place he’s ever found himself in after one of his benders, I’d be wildly disappointed.

He issues a flurry of curses in rapid-fire Spanish. His foot hits the saucer of milk I left for him. It’s nearly empty, only a few drops spill over. I almost smile.

A moment passes and he slumps and asks me what is supposed to happen now. I take out my pencil and pad. Just a few questions, I promise him.

I don’t have any questions for my stepfather. I truly wish I did. I guess my blood doesn’t call out for it—not yet anyway. I will write something about that eventually. I make a note.

My father tells me I’m insane and that I should be locked up forever. Me and my mother.

I write that down next and review it. I hope to write in this style, or something like it, for the rest of my life.

We look at each other.

A graduate of the Dramatic Writing Program at Tisch School of the Arts at New York University, Joshua Sastre has published short stories in the online journals Fear and Trembling, Kaleidotrope, The Writing Disorder, Open: Journal of Arts & Letters, and The Adirondack Review, and the print journals parABnormal Digest and Down In The Dirt Magazine, as well as the online publisher bookstogonow.com. His short story “Finished” was nominated for a Pushcart Prize by The Writing Disorder.