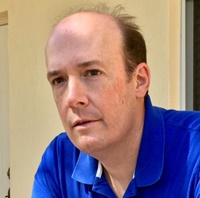 On the first Saturday of May, Barry’s mother signed him up for soccer camp, the two-year-old class.  She sighed.  Now came the tricky part.

“Every Saturday morning at 10:30 in June and July,” she told her husband.

Grayson sat in his favorite recliner, feet up, watching TV, the rebroadcast of a football game.  “Who’s going to take him?” he asked.

“It’ll give Barry a chance to get outdoors this summer,” she said.

Mary Lynn said nothing.  She knew to wait.

She put her hands on her hips, cocked her head at him.  “You mean like watching the NFL Network when it isn’t football season?”

He opened his mouth to say something, and closed it.

“It’ll give you a chance to bond with Barry.”

“Hello,” a young man greeted Grayson and Barry on the first day of camp, “I’m Coach Pepe.”  He said it as though “Coach” were his first name and “Pepe” were his last, which made Grayson, bringing the stroller to a halt, smile.

Short and slim, Coach Pepe had wavy, black hair and a black beard and mustache.  He wore an orange shirt, green shorts, and soccer cleats.  The cleats were the same shade of orange as the shirt.

Coach Pepe flipped a page on his clipboard, ran a pencil down a list.  The pencil stopped, made a check mark.  He handed Grayson something rolled into an orange bundle.  “The team shirt,” he explained.

“Hot,” Barry said, so his father rolled the stroller into the shade of a gumbo-limbo tree.  Mr. Clarke changed his son’s top.  The jersey had a logo on the front, a little boy kicking a black-and-white ball into an open goal, his hands raised in the air.  The name of the camp was printed in green: Game Changers.

Half a dozen boys and girls stood beside yellow cones in a line, a parent behind each child.  “It’s important,” Coach Pepe said, “to stretch before we play soccer so that we don’t strain a muscle.”  He walked as he spoke, pressing his fingertips together and looking at the ground.  “Do you know how to perform jumping jacks?” he asked.  He looked at the class.  “No?” he said.  “I will show you.
“Spread your feet, and rest your hands at your sides.  When I say ‘banana,’ jump, bringing your feet together and your hands together above your heads, like so.  Jump, returning your hands to your sides and spreading your feet once more.  Do you see?”  Several of the children giggled.  “I hear that you see,” Coach Pepe said.  “One, two, three, banana.”

The children leaped, except for Barry, who bent at the waist and put his hands on the ground.  “That’s not a jumping jack,” Coach Pepe said.

Barry rocked back and forth on his legs.  “What are you doing?” Grayson asked.

He pushed off with his toes.  His head was where his shoes should be, and his shoes were where his head should be.  “But what a remarkable handstand!” Coach Pepe said.  “We have a gymnast.”
Barry looked at his father upside down.  “Heeheehee!” the boy said.

“Uh-oh!” Grayson said, and tried to grab his son’s ankles.

Too late.  Barry toppled onto his back like a stack of building blocks.  He didn’t know whether to laugh or to cry.  Yep, that smarted, he decided.  His face crumpled.  “Waa!  Waa!  Waa!” he wailed.
His father scooped him up, patted him on the back.  “You’re OK, buddy,” Mr. Clarke said.  “Dada’s here.”

A boy sat down on the grass.  “Stand,” his father told him, and pulled him up by the wrists.  The boy lifted his feet and swung like a baboon.

“Show me that you hear,” Coach Pepe said.  “One, two, three, boysenberry.”

Everybody stayed put, except for Barry, who dashed for the other end of the field, where the three-year-old class met.  “Wait!” Coach Pepe called after him.  “I didn’t say ‘banana.’”

Barry looked over his shoulder as he ran.  “‘nana,” he said.

“But what blazing speed!” Coach Pepe said.  “We have a sprinter.”

“I’m going to get you,” Grayson said playfully, trailing his son.

The three-year-olds practiced passing in diamond-shaped groups of four.  They kicked the ball back and forth using the insides of their feet.  Barry charged through a group.  “Argh!” he growled like a pirate.

“Excuse us,” Mr. Clarke said, close behind his son and gaining. A girl struck the ball, which lodged between Grayson’s shoes.  He came crashing down on his hands and knees, raising a cloud of dust.  He looked up at his son’s back, getting smaller, and heard him laugh, “Gotcha.”

Coach Pepe rolled a ball to each student.  “In soccer,” he asked the class, “we may not use what parts of our bodies?”

“That’s right,” Coach Pepe said.  “We may not use our hands unless we’re goalies.  When I say ‘banana,’ place one foot next to the ball, as I’m doing, and the other foot on top of the ball.  This is called the control position.  No one can take the ball away from you in this position.  One, two, three, gooseberry.”

Everybody looked at Barry, who didn’t budge.  “Excellent!” Coach Pepe said.  “Because we listened.  We must listen before we act.  Listen.  One, two, three, banana.”

“Giddyap,” Barry said, and bounced up and down.

“But what wonderful imagination!” Coach Pepe said.  “We have a jockey.”

The ball slid out from underneath Barry, who landed on the grass, his legs bent in the air, the ball between his knees.  He spread his arms.  “Oh, no!” he said.

Grayson rubbed the back of his neck.  “Oh, boy!” he said.

The players dribbled, but not Barry.  He shifted his weight onto one leg, about to kick.  Something was wrong, he decided.  He scratched his head.  The ball.  It wasn’t in the right spot, so he squatted, picked it up.

Barry moved the ball a yard to his right, set it down.  There, that was better.

Ready to dribble, he shifted his weight, raised a foot, stopped.  Something wasn’t right.  He looked around, folded his arms across his chest.  The ball.  Ergh, that ball!  Always in the wrong place, so he crouched, snatched it up.

Barry repositioned the ball a yard to his left.  Much better, he thought.

But still not where it belonged.  He needed a different strategy, scratched his chin.  An idea came.  He stooped, gave the ball a shove with the backs of his fingers, watched it roll, hoped for the best.
“No hands,” Coach Pepe chimed like a clock.

The ball came to a stop.  Barry tossed his palms on top of his head.  Worse yet, he felt.

The ball, evidently, didn’t go anywhere, so it needed to go.  Gripping it, he spun like a top, heaved it into the tall grass, watched it bounce over a hill, disappear.

Barry stepped to the edge of the slope, his father bracing his shoulder.  The ball floated on the surface of a lake, out of reach.

The boy clapped his hands.  “Yay!” he yelled.

Grayson weighed retrieving it.  “There gators in this pond?” he asked.

Mr. Clarke glanced at his watch.  “Lunchtime,” he said.

“How’d it go?” Mary Lynn asked after putting her son to bed for a nap.

She filled another mug, and they sat down at the dining room table.

“What happened?” she asked, brow wrinkled.

He described the morning.

“I don’t think he learned anything about soccer.  It seemed like a waste of time.”

“I see.”  She sipped her coffee.  “I didn’t enroll Barry in soccer camp because I wanted him to learn to play soccer.”

Grayson started to say, “Huh?”  But he remembered what Coach Pepe had said about listening, so he waited.

“What do you think Barry needs?”

She took another sip, reorganized her thoughts.  “You offered advice and encouragement, but you let him perform the activities on his own.”

Grayson drank his coffee.  “I want him to be independent.”

“He couldn’t perform them.”

“I agree.  What could you do differently?”

Grayson took another swig.  “Maybe next week I could do the exercises with him.  You know, together.  Work as a team.”

“That,” she said, “would be worthwhile.”

“Who remembers,” Coach Pepe asked, “what we must do before we play soccer?”

“Absolutely,” Coach Pepe said, “we always stretch to prevent injury.  When I say ‘banana,’ make a tunnel . . .”  He separated his legs to demonstrate.  “. . . and touch the ground with your fingers.  One, two, three, banana.”

Kneeling, Grayson tugged gently, like a hint, on his son’s ankle, and Barry stepped with that foot to the side.  Grayson pressed lightly on his son’s back, and Barry bent from the waist.  “Touch the earth,” Grayson said.  Barry did.

Barry rose, his father too.  On his own, Barry lifted his arms over his head, his father barely grasping his wrists.  And that gave Grayson an idea.

“Yes!” the children shouted.  “Yay!” they hollered.  They stood in a line, a black-and-white ball in front of each of them.

Coach Pepe stood sixty feet away holding, in either hand, something that resembled a teardrop, a white net hung from a red frame.  “Do you know,” he asked, “the magic word?”

“No,” his mother told him, “abracadabra.”

Spinning, they opened into goals, and, spinning, landed next to each other, right-side up, their fronts facing the children, who clapped and stomped and cheered.

“Do you recall,” Coach Pepe asked, “how to dribble?”

Mr. Clarke stuck the toe of his shoe through his son’s legs and tapped the ball, which rolled a few feet.  They moved forward awkwardly, Barry’s arms lifted, his father gripping his wrists loosely.

Grayson nudged the ball once more, and they wobbled on.

They took a single step.

They took a few steps.

“Not too far,” Coach Pepe called.  “Someone will steal it.”

Barry struck the ball hard.  It rolled a long way.

“But what a powerful leg!” Coach Pepe said.

The ball lay in front of a goal.

And Barry did.  The net shook with the force of the boot.

Barry’s arms felt heavy.  He wondered why they were in the air.  Oh, yeah.  His father had been holding them.  At some point, he must have let go.  But where?

Lowering them, the boy turned around.  There his father was, fifty feet away, smiling at him.  Barry ran to his father.  “Dada.”

“You did it, buddy,” Grayson said.

Born in Baltimore, Maryland, Bob Kirkley received a BA in philosophy from St. Mary’s College of Maryland and an MA in creative writing from Florida State University.  He has resided in South Florida since 1996, living on a sailboat in Miami for ten of those years.  This marks his twenty-first year of teaching high school English in South Florida and his first teaching in the Florida Keys.  An avid paddleboarder, he stops off once a week on the way home to paddleboard in the Upper Keys.