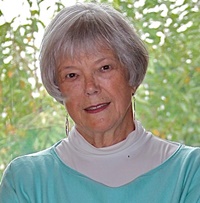 THE HOUSE ON EAST ORANGE STREET
By Toni Morgan

Homer and Naomi lived in the house on East Orange Street fifty-seven years, forty of them Homer going off to work at the San Pedro docks each morning, a coffee-filled thermos in one hand and a black metal lunchbox in the other, while Naomi stayed home to bring up their three children, make curtains, bake bread and volunteer for PTA until the children grew up and one-by-one left and came home only at Thanksgiving or Christmas or the Fourth of July or some other holiday, and Homer retired and he and Naomi learned to fill their days with gardening or dusting or watching Jeopardy on TV, and then one day Naomi died after an illness that came quickly and left her cold body behind, and each morning after that, when Homer woke up and saw the empty space next to him, he wondered where Naomi had got to, so he put on his brown trousers that bagged in the seat and his red and black checked shirt one of the grandchildren had given him for Christmas the year before and he put on his rubber-soled blue canvas shoes and went to find her, going first to the kitchen, thinking she might be fixing their breakfast, and when she wasn’t there, he’d walk through all the empty rooms calling out “Naomi” as he went, but when she didn’t answer he would remember she had died and he would shuffle back to the kitchen and pull out one of the chairs from the oak table she had refinished, rubbing coat after coat of linseed oil and beeswax onto its surface until the old, golden wood gleamed, and he would ease his body down and he would lower his head to his hands and he would weep.

The real estate agent fitted a key into the lock and pushed the door open. “It’s musty in here,” she said over her shoulder to the young Vietnamese couple standing behind her on the porch.  “The house has stood empty for several months and needs a good airing.  But I think you’ll like the way the rooms flow.  And the back yard would be great for kids.”  She smiled briefly to the dark-haired woman whose basketball-shaped stomach pushed against the front of her black cloth coat.  “The old couple who used to live here – she died a few years back and the old man was alone.  You know how those things go.  Kids grow up.  They move away.”  She led the couple into the kitchen and opened the back door to show them the lilac and fruit tree-filled yard.  “The family thought he was getting along on his own,” she said.  “But when the oldest son came over from Tucson and found the old man nearly starved to death, they put him in a nursing home.  The sons are the ones selling.  So, what do you think?”

Born in Alaska, raised in Oregon, where she studied history at Portland State University, and married in Hawaii, Toni Morgan has lived all over the United States, from California to Washington, D.C., and the world, from Denmark to Japan.  She now makes her home in southwestern Idaho.  She is the author of six novels: TWO-HEARTED CROSSING, PATRIMONY, ECHOES FROM A FALLING BRIDGE, HARVEST THE WIND, LOTUS BLOSSOM UNFURLING, and QUEENIE’S PLACE. Toni’s articles and short stories have been published in various newspapers, literary magazines, and other publications.