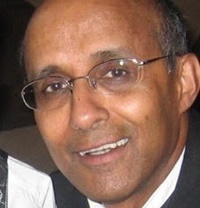 As I ate my fried rice, I wondered if I should engage him in conversation. Or, would he think I was intruding?

I tried breaking the ice. “Are you on lunch?”

He wore no coat and from what I saw above the table, he was dressed in a white long-sleeve shirt, a small black tie hanging loosely around his neck.

“No,” he said, without looking up.

His had been the only table outside the mall with a vacant seat and even after I had received his permission to sit I wondered whether he would rather be left alone.

His French fries languished in a sea of gravy at the bottom of a paper container and he was attempting the delicate job of spearing them with a miniature plastic fork no larger than a toothpick. One after the other, he impaled each member of the now sodden portion and placed it delicately in his mouth.

He had the preoccupied look of someone who had just witnessed a terrible accident and couldn’t get it off his mind. I was curious. “Do you work around here?”

He looked up from the Coke—he’d just finished the fries, and said, “No, Sir. I’m here for an interview at Food City. Do you work in the mall?”

This was encouraging. “Yes, I do, actually. What do you hope to do at Food City?”

“I’m applying for work in the Meat Department.”

“It can really get cold in there,” I said. Somehow, I couldn’t picture him with his small, lean frame, working long hours in sub-zero temperature, heaving heavy sides of meat. He had to be made of sturdier stuff than his appearance suggested.

“Yeah, but I don’t mind. I like the cold.” His face brightened up when he said this, and it made me think he really meant it.

He lapsed into silence again, twirling the straw around, peering through the opening of the Coke can to see if there was anything left to drink. Then, he said, as if it were something he desperately wanted to get off his chest, “I need this job badly. Lost my last job yesterday.”

I said nothing, hoping he would continue.

He leaned back in the chair and extracted a pack of Players and a card of matches from his pocket. He tore a match off the card and paused with it in mid-air. “You don’ mind if I smoke, do you?”

I told him Not at all. He lit the cigarette, fanned the match until the flame was out, and then dropped it into the Coke can. I heard the sizzle as it hit the bottom.

“What happened on your last job?”

He took an extended drag from the cigarette and said, “It’s a long story.”

I prompted, “What happened?”

“It’s hard to explain. Something to do with starting off on the wrong foot and working in the wrong place with the wrong people?” It sounded like one of those statements teens make in the form of a question.

I took a closer look at him while he stared at the glow of his cigarette. He was young, about seventeen or eighteen, and diminutive. I was impressed that he had been considerate enough to ask my permission to smoke. Now, as further evidence of his good manners, he was tilting his head up, angling it to blow the smoke away from me.

“The supermarkets pay well, don’t they?” I said, trying to pursue the conversation from another angle, wanting to find out the reason for his departure from the last job.

“Yes sir, a lot better than working in one of the mall stores, like Stitches.”

“Have you ever worked in one of those stores before?”

“No…” he shook his head, tapped the ashes into the paper container, watching them coalesce with the gravy. But, before he could continue, he spotted someone passing just outside the side entrance, and he shouted, “Hey Dino.”

Dino saw him and came over. “Carlo, what are you doing here?” he said, as they gave each other a high-five. “Are you working, or what?”

Now, they were both seated at the table, facing me. The newcomer appeared to be a few years older. He wore a long overcoat—black with small white dots and narrow pin stripes, Italian fashion. And like Carlo, he too had his hair combed back in a high muff, fifties style: black and slick, almost as if he had dunked his head in hair gel.

“Nah man. Got an interview at Food City. Lost my last job yesterday,” he blurted out, blowing circles into the air through pursed lips. “Do you know Tony? He works at A and P too.”

“Yeah, your friend, the one you’re always hanging around with?”

“Well, we wuz horsing around, spraying one another with the hose—you know, the one you use to clean the floor with. Well, the boss caught us, canned both of us, on the spot. Man, was I ever sorry.” A pause, flick of the ashes into the container. “Did you hear ‘bout the rumble at school?”

“You mean the one with the gang from Notre Dame?”

“Yeah man. Bunch of guys come over in cars, picking on us.”

“Naw man. Those guys are BIG. One of them trying Karate on us.” He jerked his head back and forth and made slashing movements with his hands.

“These guys are for real, man. You shoudda seen them moving around.”

“Yeah, but you get them on the ground and all that Karate shit don’ mean nothing.” But, before Carlo could digest this and respond, Dino said, “Hey, you still seeing Angela?” As if the very idea of having a rumble on the ground invoked some distant memory of her.

“Angela!” Carlo repeated, with a roll of his eyes, shaking his wrist and rotating his head at the same time. Dino grinned, a wide grin that showed a dimple starting from the high cheekbone on the right side of his face and carving its way down to his jaw. The thought of Angela seemed to summon an image of indescribable pleasure they had both shared.

“Man, that Angela is something else,” Carlo said. “I’m getting wheels soon. My dad’s loaning me two thousand dollars to buy it.” I found this amusing. Had the thought of Angela provoked a spontaneous parallel with his desire to buy his own car?

“Yeah?” Dino said. “What are you getting?” As he talked, he kept taking covert glances at his reflection in the mall door to our right, no doubt looking at his long oval face, trying to perfect the circles as he blew smoke into the air. He was good looking, a young Valentino, sharp, well chiselled features, the skin of his face a smooth texture, as if he had not experienced his first shave.

“Dunno yet. Have my eyes on a Ford, Tempo or something like that. Did you hear what happened to Tony at school?”

“You mean about the dope? Yeah man, the whole school knows that.”

“He and another guy wuz smoking a joint in the john. In walks the Principal. Man, did they ever ditch it in a hurry. He almost messed his pants that time.”

Carlo shifted in his chair. He was constantly doing this to survey the crowd passing by, a relentless search of faces, as if he were forever trying to make a connection. Just a few minutes prior, he and Dino had looked across at the other table with the four girls, and then they had nodded their heads in mutual appreciation. It was another expression of the silent language they spoke—no words needed, a lift of the eyebrows, a smirk, eyeballs dancing in their sockets, just enough to communicate the message to each other.

“Have you ever tried it?” Dino said.

“What? You mean smoke dope?”

“Man you crazy. My father would kill me if I ever did. Not that I want to.”

Carlo continued his surveillance. Suddenly, he sat bolt upright on the bench, his eyes following the movement of someone heading for the entrance. In the rush of the busy entranceway, something was triggered. The guy turned around and recognized him instantly. It was uncanny. It made me wonder: does some supernatural force guide teens? Do they transmit signals to one another, something that says: I’m here, come on over and join me.

The new guy sauntered over to the table, a cigarette held casually in his hand. He wore a black bomber jacket, his light brown hair hanging loosely around his shoulders.

Carlo greeted the newcomer. “Hey man, buy me a drink.”

Blackjacket pushed his left hand deep into the pocket of his jeans, pulled out some change, counted it and placed a quarter and some dimes on the table. “Gimme twenty cents—this is all I got.”

Carlo said, “Mother…” and took a hasty glance in my direction. “…Sucker,” he blurted out. “Where is the rest of the money?”

“Here,” Blackjacket said, pulling out a bill from his hip pocket to overcome the threat to his reputation. “A hundred is all I have.” He waved the note in the face of the other two.

Dino came to Carlo’s rescue. He fished out two dimes from his pocket and turned them over to Blackjacket who left to pick up the drink in the food court.

All through the conversation, I’d been sitting there, sipping my milk, following the discussion and trying not to look like an intruder. But, I need not have worried. From the moment Dino came over, to Blackjacket’s arrival, the three of them had never as much as given me a glance, except when Carlo was about to swear at his friend’s tightfistedness.

I looked at my watch. It was time for me to get back. As I silently slipped out of my seat, Carlo and Blackjacket were still there, talking, eyeing the girls, scrutinizing the crowd flowing in and out of the mall. I thought of how boys hadn’t changed much from the time I was growing up. Back in my day, we did the same things, pursued the same interests, and longed desperately for the same outlets our ever-active hormones demanded.

As I headed back to work, I chuckled. In another fifteen minutes, perhaps later, depending on how prompt he was, I would be meeting Carlo, again.

Ken Puddicombe is a retired CPA who has returned to his love of writing. He’s had articles published in newspapers along with short stories in literary magazines. His first novel Racing With The Rain, published in 2012, was set in pre and post independent Guyana. It was followed up by Junta in 2014, set in the Caribbean. His collection of short stories Down Independence Boulevard And Other Stories was published in 2017.