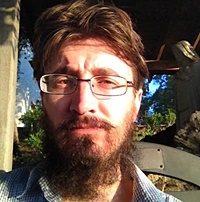 That all the last daylight should have passed;  not only in the sky but in our daydreams;  for night in slipping closer says we’re freer than we were;  or more closely tied to one another ( which is what freedom is).

All the last lights should come over to us;  here in our hearts, where we have been keeping them, on this last echo of our time here, La-Z-boy on derriere and Schlitz in hand, for the dereliction of our national duty, the sweetest thing.

No one offers any reservation, or much comment, other than

“What a nice evening.”

What a nice evening it is, made just by the simple reason of it, and held to on account of its righteous splendor, almost mathematical in its ordinate simplicity.

There are no other options;  nor any wanted;  no other avenues of escape, no other people on this earth but you and yours, on blankets with picnic baskets and the end of the world.

The interesting thing is the feeling;  those things which are more difficult to describe. Of course we have names, outfits, nationalities, languages and curses and histories; lovers and destinations; occupations; identities. The feeling is something else, some ur-stuff that waits hidden under the earth, inside of stars, in the darkness of the heart, whose rich ichor not composed of platelets but ideas and universes, the scape of the night, and other nights beyond this one, whose vast blanket covers our women in their quiet splendor.

No one can say otherwise; because it would be too rude, and no one can invite anyone else in either;  it is too late. We are already here to watch it;  already here to say what it is we have seen; and, well. You’ve been here before.

Perhaps there’s the questioning too, that we must do; or I feel I must, set under the grave and dignified expanse of the gathering night, to inquire why it is we’re here.

James Agee wanted to know too; we have invited him, with his cigar and cape, and his hat. All of the past is here with us, to see why we have come; and what it means. Who is in love, and who is out, and on which courses we are trying, trying, trying, our souls to fire the needful engines underneath, to stars within.

We are alone here under the night; swirling above. I can see everything I ever wanted to see, except for you.

Robin Wyatt Dunn was born in Wyoming in 1979. He is a graduate student in creative writing at the University of New Brunswick, Canada.