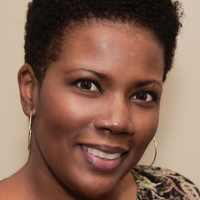 MY DESERT
by Myla Grier Aidou

Moses and the Israelites wandered for 40 years in the desert. Every time I have heard this, I have said to myself, “Damn.” Why did they have to do it their way? Why didn’t the Israelites just listen to what ‘thus saith The Lord’? As I mature and self-reflect, there are some deserts in my own life I could have avoided had I listened to what “thus saith The Lord.” Today I give you one.

I was a teacher. Technically, I still am, but if I have my way, I will not teach in a K-12 school setting again. Having begun my teaching career in the state of New York, when my provisional certification expired, I had a dickens of a time obtaining funding to attend graduate school. In some states, a graduate degree is a necessary component for certification beyond provisional status. I was given an extension, not once, but twice and it was about this time that I was on a sabbatical and had written a novel. Well that’s not quite accurate. I had begun a novel years prior; during the sabbatical I had chunks of time to finish the novel, which I gladly did.

Although the sabbatical was for health reasons, it was one of the best years of my life. I was getting an income (full then partial salary) and I was able to write FULL-TIME! Something I dreamed about from the time I could remember. Yes, I also imagined myself a teacher when I was younger, but it wasn’t a career that hovered in my fantasies the way being an author did.

So my novel went to many agents and then a publisher after a query letter invited a “look-see.” My novel went back and forth—twice, which is a huge step in the publishing industry. Super excited, I had already begun novel number two when the editorial team changed hands. The editor of initial contact wrote me a note of apology, breaking it to me that the new editor was uninterested in my novel. I imagine her intent to minimize the weight I felt, sledgehammer of rejection, crushing my dreams. Damn. Damn. And Double-damn.

That one rejection put me (back) into the desert, the land of safety where I knew what to expect on a weekly basis. To say I was discouraged is understated. My hopes and dreams of being a writer (of fiction) were sucked out of me. But if you know anything about gifts they are like air pockets; even if unseen, they are there waiting for a chance to surface. Thus it was with my gift of writing. Poetry began to ooze out of me and the idea of being a novelist kept me out of the literary world and into the desert of teaching.

Masters degree, $35,000 in tuition later (plus books and all the other college related fees) and professional certification, I stayed a teacher full-time, wrote part-time and trudged along in a world of stability: bi-weekly income, health insurance and a pension at age 62, 65 or 67. You may think this is a great deal. If you do, you have not been a teacher more than three years, if at all. Teaching these days is not our mothers’ and grandmothers’ fantasies. No, My Dears, teaching these days is emotionally and physically exhausting, and if you happen to work in a Title I school, it can also be demeaning as you bear the brunt of all student failings.

So if you make it to 62, 65 or 67 as a teacher, congratulations. I hope it was the career of your dreams. Otherwise, you had better dig deep and give those air pockets some room to grow into fruitfulness in the form of other gifts, talents and abilities God has placed within you.

Many people, well-known in the world of arts and science were formerly classroom teachers. Gospel artist Yolanda Adams, writer Stephen King, Kiss guitarist Gene Simmons, Grey’s Anatomy actor Jesse Williams, and inventor Alexander Graham Bell, are a few who come to mind. Even former president Lyndon B. Johnson taught public speaking in Texas before going on to become the 36th president who signed the nation’s groundbreaking Civil Rights Act of 1964.

So I left a land of perceived comfort to step into another dream. As Langston Hughes would say, “Chile, life ain’t been no crystal stair,” but I am climbing. Each day brings with it a chance to write, submit, and hone my craft. Sometimes I get published. More often I do not. But it does not stop me. Words are life to me.

Some wise person once said, one will know what their life work is when their passion for the work is such that he/she would do it without being paid. That person must have been a yet-to-be published writer.

Myla has participated in (and won!) “Slam” competitions, sharing verses along the east coast, as well as overseas in the United Arab Emirates. Her writing can be found in Teach Middle East, The Torch, Molloy Literary Journal, Resist Much Obey Little: Inaugural Poems to the Resistance, SalonZine, and Yes, Poetry!). The author of God’s Daughter (www.amazon.com as Myla Jones), an inspiring text covering issues such as abuse and addiction, Myla resides in New York, where she maintains her blog (www.empeejayblog.wordpress.com).