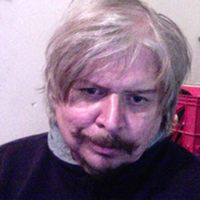 I was supposed to be attending the National Debate Tournament in Princeton, New Jersey. Instead, I detoured to the annual Worm Grunting Contest in Slapchappy, Florida. The good news and bad news: I won the under-75 class–I grunted up 482 worms–a new under-75 record (though admittedly far short of the over-75 record of 557 worms held by the immortal Harold Stank), for which I received the first place prize of $20. The bad news: I would have some serious fibbing to do when I got home. Fortunately, I’m very good at making up stories to cover my tracks. There was no reason this time would be any different.

In case you don’t know, a worm grunter attempts to entice worms to come to the surface. To do this, you drive a wooden stake into the ground, which you then rub with a smooth piece of metal like an old saw blade. This creates a vibration which attracts a worm, and it quickly works its way up to the surface The WGC is the big event of the year in Slapchappy, population 302. This year, some forty people grunted, and nearly twenty more were spectators. In the nonstop rush of grunting and beer swilling, I wasn’t even thinking of what I would say when I arrived back home. I started tossing it around in my head on the drive back.

Think about it: how are you supposed to explain to your parents, who have worked and slaved to send you to the best school, hoping that you’d become a successful lawyer or diplomat, that you’d rather spend your time rubbing a stick in the ground, trying to scare up earthworms?

The way I saw it, there were fifty million good debaters running around, but only a small, very select group of people could claim to be expert grunters–people like Garley Peffelfanger and Hilda Buffonk–and I surmized they made some serious money from endorsements.

So I was sure I could talk my way out of it, get a plausible story past Ma and Pop, using my trusty old tool, bullshit. I’d have to be in top form this time. I felt very good about my chances, though, as I was well-rested from the drive, and reality-based in my thoughts, as much as I ever am.

However, I knew I was treading on thin ice when I stood with Ma in the kitchen and she was icily silent. Pop came in from the front yard, where he’d just shot down a drone flying over our property (“That damn Amazon!”) and stood with Ma.

Okay, Alex, this has to be convincing. Put on your debate face.

“So, how was the debate tournament?” Ma said.

“Did you learn anything?”

“Well,” I said, “I entered the novice competition but didn’t win. But I picked up a lot of pointers from the experts. How to come up with arguments, organize ’em, present ’em, stuff like that.” That sounded quite good.

Pop said, “What was the debate topic?”

Make something up. “It was, uh, let me see if I can remember the exact words. Oh, here it is: ‘Russia should be invited to become a full member of NATO.’ “

“Those are the exact words, eh?”

“I don’t think so. I looked it up. Here it is: ‘Research on animals for scientific purposes should be banned.'”

I looked down at my shoes and Pop did, too.

“Look at the dirt on those shoes,” he said. “They was new when you left. You ain’t been to no debate contest. You’ve been gruntin’ those damn worms again, haven’t you?”

“You’d rather hang out with night crawlers than learn how to debate, eh? Then s’pose you go sit in that hole in the back yard for a while?”

“You mean that pit they’re diggin’ to drain the septic tank?”

“Get out there and sit in that hole.”

I put on my oldest, crappiest clothes and went out and sat in the hole, which was filled with about seven inches of “wastewater.” God, what a stench.

As I sat in the hole, I started to grow fearful: what if some of my college friends, home for the summer, came to the house? What would Ma tell them? Pop? “Oh, he’s in the back yard, sitting in a hole.” The thought made me insane with terror.

No, this could not happen. I knew that the gods hated my guts, but surely they weren’t this deranged, to let something like this happen.

It turned out, they were this deranged:

Stepping down the back steps and walking across the yard were the two girls I admired most in this town, Mary and Jenna, home for the summer.Oh, no.

Mary: “Hello, Alex. My, you’re lookin’ spiffy.” Tryin to keep a straight face, but losing it.

Jenna: “Alex, I hate to use cliches, but you need to ‘clean up your act,’ as they say.” She managed to get it out before she cracked up.

Mary: “Oh, god, this odor will permeate our clothes.”

Jenna: “We’re out of here! Alex, give me a call when I can’t smell you five miles away.”

Then Grandma came by.

“Glory, Hallelujah! Just look at you!”

When she stopped laughing, she put on a serious face. She said, “We had such high hopes for you, Sweetness. The first one in the family to go to college. And here you are, sittin’ in a damn shit pit!”

“I’m sorry, Grandma. I’ll try to do better next time.”

“That’s what you always say, you young jackass!”

It was time to swing for the fences: “Grandma, do you think you could ask Pop if I can come out now?”

“I ‘spect he’ll let you out when the time is right.”

“Yes, Grandma.” I was raised to always remain respectful, even in the direst circumstances.

Well, Pop eventually did let me out, when a sudden tornado warning popped up, but Ma and Pop and Grandma made me sit in the opposite corner of the cellar from them, out of smelling distance. I hoped the tornado would fill the hole with boards and cows and stuff, so nobody could sit in it, namely me. But when I looked later, the pit was empty, almost dry. The tornado had sucked the shit out of our septic tank!

Well, as you can see, my cover story bombed. And so, from that day on, after I got the smell off, I pursued my studies with a single-minded passion, as much as I am capable of. I ask you not to divulge the foregoing history to anyone, as it would seem unseemly for the newly-elected President of the International Monetary Fund.

Seriously, though, I am today the Secretary General of the Saskatchewan Lavatory Attendants Association. So, not a complete washout by any means.

A former staff writer on historical subjects at ProQuest, Dan Elasky left several years ago to try his hand at fiction. He’s written two novels and recently completed a collection of golf stories, and finds writing short form fiction challenging and satisfying. He’s especially drawn to unusual characters and situations. In addition to writing for publications, he’s currently developing a partly humorous, partly serious series of podcasts for children. Dan is a member of the Old Town Writers group in Alexandria, Virginia and lives in Fredericksburg, Va.