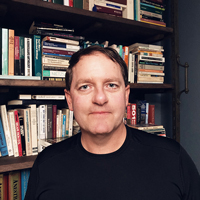 I DO NOT LIE IN’T, YET IT IS MINE
by Dane Myers

If my dead grandpa, a kindly and devoted Republican farmer, were to visit the living
he’d first ask about black angus and alfalfa…
then the weather…
and then politics…

I’d first ask him about Adrienne Rich and Dante, Abe Lincoln and Hamlet…
then ask ha riddle: “Who builds stronger than a mason, shipwright, or a carpenter?”
and then I’d tell him how institutions such as universities, religions, and political parties were more intent on protecting their power and image over beneficence, truth, and children.
Perhaps he’d chuckle and say, “Oh? That hasn’t changed.”
“But now they separate the children from parents, brothers from sisters, and babies from breasts.”

“Speaking of children,” I’d say, “there’s been an eruption of shootings, some at schools. One involved a kid with an AR-15.”
“No,” he’d reply. “We must protect the Second Amendment and agree on some common sense rules.”
“The N.R.A. begs to disagree.”

I’d tell him how Republicans had placed business, the present, and profit over climate change, the environment, and our future.
Maybe he’d shake his head and say, “Tough choices… How bad is it?”
“A hideous list of rising seas, storms, and smog… offshore drilling, droughts, and dying reefs… melting poles, fires, and extinctions…”

“Speaking of bad,” I’d say, “the self-proclaimed party of fiscal responsibility has exploded the deficit and debt.”
“No! Is there a war?”
“Only on the media, taxes, and trade. The tax-and-spend Dems have been dwarfed by the little-tax/ spend-a-ton Republicans.”
“How much?”
“A gift of trillions for our grandchildren.”
He’d laugh and say, “That much money doesn’t exist.”

I’d recall how my Grandpa, a kindly and devoted Republican, had once voted for a Democrat. “Jimmy Carter,” he’d said, “was a good Christian… and a farmer.”
Then he’d smile and say, “A grave maker.” My dead grandpa was still good at riddles.

“I’d tell him how his party had supported a misogynistic, racist, and mendacious president. An orange peacock who’d said, “Grab them by the pussy.” A man who’d described immigrants as animals and infestations. A man who’d described Haiti, El Salvador, and some of Africa as “Shit-hole” countries… The guy tweets like an adolescent chicken, splutters incoherent word salad, and exceeded a thousand lies during his first year in office. Perhaps I’d mention Charlottesville and Puerto Rico, Maxine Waters and the wall, Stormy Daniels, McDougal, et al.
“Oh?” he’d reply. “But my party has always sought the moral high-ground. Does he attend church?”
“The man has been given a pass. But he’s religious about money, philandering, and golf.”

“Speaking of scrutiny,” I’d say, “he granted questionable security clearances and threatened to strip others. The President has alienated allies, saluted adversaries, and undermined our own intelligence. He howls “Fake! Witch Hunt! and Hoax!” His fans believe that their ruined ‘Constitutional’ makes anything so. Perhaps I’d mention Conway and Cohen, Giuliani and Gates… Papadopoulos and Porter, McEntee and Manafort… Flynn, Nunberg and Stone…
“No. Ours is the party of law and order.”
“Now it is the slumber party of an averted gaze.”

I’d tell him about the Mueller investigation, how Russia influences our elections, and how the inquiries and reforms are being thwarted by—oh yes—many Republicans. I’d tell him about the bewildering hell at Helsinki and how the slogan “America First” shall be laughed.
“Nonsense!” He’d stomp and proclaim: “Russia, and particularly Putin, are not to be trusted. My party would never turn away from any caustic manipulation and meddling.”
“Gaze averted, with a dramatic turn. They are Diving into the Wreck of their not-so Divine Comedy… A house-divided, distracted globe, and unweeded garden filled with diseased wormwood and wit.”

“Most foul, strange, and unnatural! Who is this feckless leader?” Grandpa would wail to the Commander-in-Chief who rules with changing recollections, evasive derangement, and a shriveled staff. “But he’s a last-rate showman and con artist constituted of endless ego.”
Then I’d frown and say, “His lemming-like followers would leap from a cliff if said to be a Hoax, Witch Hunt, or Fake. Drunk on power and prejudice, they might even drink cyanide-laced Kool-Aid that’s said to be Constitutional and First.”

“Oh no,” he’d reply. “Either you jest, or America has turned upside down.” My dead grandpa, a kindly Republican farmer, would leave the living and say, “I’d rather return beneath the earth as they make their own graves… I’d rather stay dead, rollover, and think of my children…
then their grandchildren…
and then their children’s children

Dane Myers holds a B.A. in English/ Philosophy and a M.F.A. in Creative Writing from the University of New Mexico. He has published fiction, creative nonfiction, and poetry in Fresh Boiled Peanuts, Ascent, Willard & Maple, World Audience, The Evansville Review, Ginosko, North Dakota Quarterly, and Slow Trains. His short story, Respite, was nominated for a Pushcart Prize; his first novel, Siren’s Red Light, was released in 2017 (Amazon and Kindle). Although he mostly writes fiction, Dane experiences an occasional itch to write poetry–particularly poems with titles usurped and trumpeted from a Hamlet of Danish clowns. He lives in Albuquerque, where he continues his 30+ year day job as a paramedic.