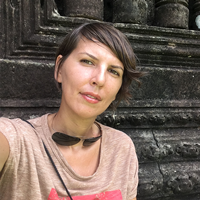 PLEASE CONFIRM YOU ARE NOT IN BEAST MODE
by Anna Brassky

A month ago, Chris began to see dwarfs, though not exactly see but rather sense their presence. Just as he was about to spot them, they hid. He could only get a glimpse of their small dark outlines and tiny dirty feet as they ran away.

It’d have been okay if they appeared only outside and during daytime. But they got into his bed at night, rattled his sheets and pinched him. He cried and called his family for help. He was sure that if someone else saw them too, the dwarfs wouldn’t trouble him anymore. His brothers and sisters rushed over, turned his bed upside down, but the wicked dwarfs holed up in their crevices – all that his family found was the light fluttering of blankets from their rapid flight.

At least his siblings believed him. Each time he shrieked in his bed they were there by his side, and that comforted him. It meant that they wouldn’t let the dwarfs win, because Chris knew what these creatures wanted. When he was asleep, their little bodies snuck to his neck, sat on it and closed his mouth and nose with their filthy palms so he couldn’t breathe. The only way to stop their abuse was by waking up, then they disappeared under his gaze, and his breathing returned.

To be helpful, his family signed him into a therapy group. Those people could suggest how to get rid of the dwarfs, they said. They had gone through similar things, and each of them had their own solution. Chris was glad to meet like minds, but as soon as he set foot in the room, he immediately realized he was surrounded by psychos. Was that what his family thought of him?

Not willing to stay in this gray, faceless place soaked in dust and boredom anymore, he walked straight to the corner of the room where a young woman with glasses and a thin mousy ponytail sat at a shabby desk. A few other people joined him; they now stood silently behind making him the undisputed leader of their rebellion. They’ve probably figured out this place too, thought Chris.

‘I…We want to leave,’ Chris announced loudly, staring at the faded flag on the wall.

The girl looked up at him wearily, her gaze reading, I’m so sick and tired of you all, and said:

‘Please confirm you are not in beast mode.’

‘If you want to leave,’ the girl repeated with a sigh, ‘you need to sign a certificate that you aren’t in beast mode. Here it is.’ She pushed the paper across the desk; a pen was there too, next to it.

That’s crazy, thought Chris, but still reached for the pen and signed the paper.

‘This copy is for you,’ Specky said when Chris tried to return it to her. ‘It’s enough for us to know that you’ve agreed to sign.’

At home, Chris hid the certificate under his mattress. He had a gut feeling it belonged there. Please confirm you are not in beast mode. What had she meant? Before he knew it he had fallen asleep. The dwarfs showed up, once they saw he was defenceless. Vile wretches!

Chris realized that the air was coming out of his lungs but was not returning. It was getting harder to breathe. He tried to wake but something hampered him. Calling for help was the only thing that could save him before it was too late.

‘AAAH,’ a scary animal bellow exploded from his throat while in his head he heard, Please confirm you are not in beast mode.

‘Will you go?’ half-awake Mother asked Father in the neighboring room. Chris’s muffled screams had woken her, now she lay on the bed squinting into the blinding moonlight.

‘Nah,’ Father answered and turned onto his other side. ‘Let him wake by himself.’

‘AAAH,’ Chris continued to shriek but the sound didn’t come as clear any more. It rather resembled a growl, a beast’s growl. Please confirm you are not in beast mode. So that’s what it meant. Maybe, he’d gone into beast mode and didn’t notice that?

But the dwarfs were gaining the upper hand. His lungs were almost empty, his throat burned and his head became heavy, like a bowling ball. Chris still tried to fight, swung his arms and legs, spun like a top, anything just to shake those little sneaks off. But the bedsheets bound his fierce movements. He ripped them with his teeth but they enveloped him even tighter.

PLEASE CONFIRM YOU ARE NOT IN BEAST MODE! a female voice screamed in his head.

‘I can’t,’ Chris hissed, like a rattlesnake now – these were the last drops of the air leaving his body. He froze.

Chris’s body was found in his own apartment where he had lived alone for the last ten years. In his sleep, he had tossed and turned, winding mounting layers of cloth around him. One of the wraps covered his head. Any other man would have thrown a blanket aside even in the deepest slumber – it was a basic survival instinct – but Chris was unable to do that; he was wrapped like an ancient Egyptian mummy. His death throes only tightened the coil strangling him.

‘Just like an animal in the coils of a constrictor,’ noted Harry, one of the policemen who had arrived on the scene.

‘Yeah, poor guy,’ Nick agreed. ‘Do you know what he watched before going to sleep?’

‘Snow White and the Seven Dwarfs. Weird, isn’t it?’

Harry and Nick picked up Chris’s cold, skinny body and put him on the stretcher. Behind them, the dwarfs giggled acidly.

‘Turn off this cartoon already!’ Harry snapped without turning back. Unpleasant chills ran down his spine.

‘It’s not on,’ replied Nick as he eyed the dark screen curiously.

Anna Brassky is originally from Moscow, Russia but she currently lives and works in Southeast Asia. She studied Linguistics and Psychology and she has always been a fan of science fiction and Russian classic literature. This unusual combination and her adventurous spirit have become her inspiration for creating stories in the genre of psychological science fiction. Anna has recently finished her debut science fiction novel, Nadarri, which hasn’t been published yet. She is currently working on her collection of short stories and non-fiction book tentatively entitled, How to Master Your Body. For more information about the author, visit https://twitter.com/ABrassky