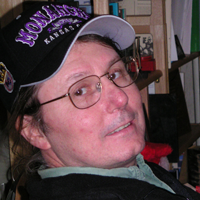 If Buddha had a cold
would the eight-spoked wheel
still start to turn?

Would the diamond vehicle
convey learned saints
above the summit of Mount Meru?

Would meditation cushions
stay empty, even unmade?
Would zendos be storerooms?

Could there be saffron robed,
shaved-headed teachers wandering
Lhasa, Paris or Enid, Oklahoma?

Where would the loose
compassion find a home?
Who would discover Metta?

Perhaps another could find
a holy tree, could creates
a completely other Bodhgaya?

If Buddha had a cold
would we be left with
“Life is sniffling”?

You seem misplaced—a key under the sports
section or check-up card from your dentist.
Not lost, not right though. Morning toast resists
the jam. The newspaper carries all sorts
of plague news. Outside moist heat hides in mist.
The day calls you in spite of your desire
for warm comfort in bed, for the banked fire
of heat she left behind. Your alarm insists
you rise. It was some dream—where you were hired
to gather jeweled sins that mourners dropped
at your own wake. There was a girl with cropped
hair hiding the keys to your task. You stopped
while she taught you wicked ways to disport
with death, leaving the dream floor damp, unmopped.

The ghost of a tic haunts her pale left cheek.
She texts premature sorrows and two weak
apologies while the bus rolls to a stop.
She rises at each bell and switches spots
when doors hiss open. Her skirt is too neat
for work, she knows. But knows that’s all she knows.
There’s no learning left in her. Traffic flows
through flashing lights. She unfolds her long hands
and grabs the stop cord, rising to stand—
grade-school stiff—just to please an empty ghost.

The gods are back, companions. Right now they have just entered this life; but the words that revoke them, whispered underneath the words that reveal them, have also appeared that we might suffer together.”
—René Char

The gods of this city, at rest atop
their leaning tower, sip smooth designer
coffee. One says, “It’s time to put a stop
to worship of numbers. They refine their
calculations and forget about us.”
A goddess answers—drowned out by a bus
passing below. “Temples don’t get finished,”
says a stern, old god. “They forget to pray.”
“That bothers you?” winks a love god, playing
the fool, sliding to the street like a fish.

“Suburbs can be nice—they’re very quiet,
with wispy trees and green lawns of rolled sod.
Their hearths are screens. No talk. You should try it
for a bit.” This was the laziest of the gods.
“I eat prayers,” mouthed the stern one. I miss smoke
from offerings, ceremonies.” (when he spoke
clouds formed around the tower’s slanted top).
“We are all numbers and have always been,”
said the slyest god. “I desire days when
people are kind and their sad noises stop.”

“When we made them,” offered the lost love god
just back from the cool street, “we taught them fire
and stone. Make things, we said. We thought the odds
were long, they wouldn’t last. Now we’re all tired
just watching them speed around cherished grids.”
That goddess said something but a truck hid
her sounds. They looked at their city and wished
for better creatures. Still, the stiff exhaust
was a kind of smoke, a new holocaust.
They breathed deep. Cracked the glass. Made a fresh myth.

First bow to darkness. When the hawk-faced girl
appears, formed from pain, accept her cold book.
A page will find your touch and texts will hook
your hands. Let your fingers create what God
forgot to write. Let each loop and spiral
seep like blood into your skin. Then meaning
unfolds. Avoid sounds, breezes and seeming
breath. Her hawk face is gone leaving an odd
angled light. A language enters through touch
and knocks your hand aside. Know this is all
a pantomime that’s been acted before
that hovers because something—not much,
but something real, is asking you to fall
into dark. Hold this world. There’s nothing more.

Mark J. Mitchell’s latest chapbook, Music for the Other Voices is available from Finishing Line Press. A full-length collection of poems, Starting from Tu Fu is coming from Encircle Publications in September. His novel, The Magic War was published by Loose Leaves Publishing. He studied at Santa Cruz under Raymond Carver and George Hitchcock. His work appeared in several anthologies and hundreds of periodicals. He lives with his wife, Joan Juster making his living pointing out pretty things in San Francisco. A meager online presence can be found at https://www.facebook.com/MarkJMitchellwriter/