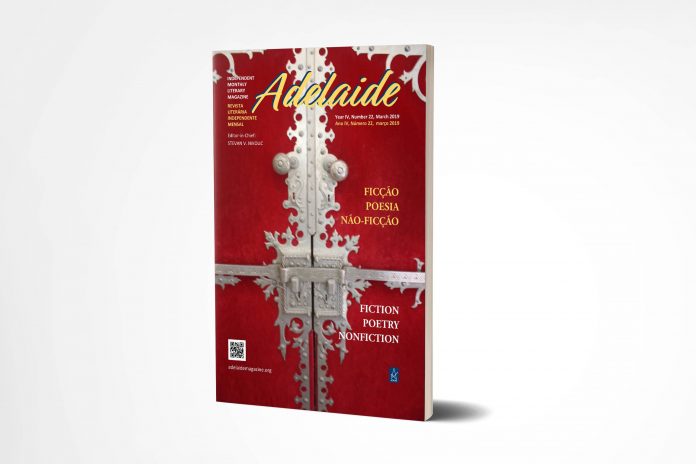 For the next nine years he wandered from one ranch to the next. The old man had long ago gone to whatever final rewards he’d had coming, leaving George to embrace solitude in that singular way that only a man who has murdered his own best friend can do.

The Big War had rid the ranches of the young help, so George found himself in high demand. With so much work to do–hoisting bales, commanding the plows, throwing fertilizer, harvesting bare-handed–George discovered the nightmares had slipped away. All he had left, besides the old and baggy clothes in which he worked, was a glorious sense of emptiness, with nothing approximating a future anywhere in his mind. Bouncing bundles of wet straw onto the bed of a flat truck one humid afternoon, he stopped to stare into the sun, sensing for the first of many times that the past had slipped away, leaving him with nothing much to think about. All he could feel was the frost that had seeped into the tanned wrinkles of his arms and hands. That damned frost just would not leave George alone, no matter how committed he was to the labor at hand.

Even working road construction in the south Arizona desert in July, with temperatures pushing beyond one-twenty, he shivered from the unremitting damp ice that lay just beneath his skin.

His reputation preceded him, of course. This was the man, after all, who had placed the barrel of a gun behind the ear of his best and only friend. This was the man who had spent the better part of his life–better? Ha!–taking care of the noble giant, only to squeeze a trigger and splatter the man’s brains into the soulless pond rather than allow the men at the ranch to string him up.

This was the man who had–through neither fault nor nobility–become a walking legend as he drifted from one work ranch to another, never begging for a job, merely standing outside the gate with his hands buried deep into his pockets until the foreman or someone in charge recognized him and told him to come on in.

While the other men–and women, too; let us not forget that with the Big War going on, many women had to join the older men in the fields–would bark and cackle and bitch and curse, George seldom spoke, even to himself, even inside his own head. Had anyone been ignorant enough to have asked George “Why so glum?” he would have taken action against that person with a swiftness that would have left the others blissfully speechless.

No one on the ranches made the connection between George’s appearance there and the disappearance of various malcontents. Spider Cooney, a big bastard of a worker who had been sweating alongside George at the Albert Yantee farm in Nogales, wasn’t missed by anyone, least of all by Albert Yantee. Spider, a round and robust man, had been the first person to decide, on his own and unprovoked, to speak to George about what had happened years earlier. Albert Yantee overheard and told George not to worry about it, that Spider had more fat cells than brains. Two nights later the frost fell across George. He rose from his bunk, somnambulant and unafraid. He tapped the snoring Spider Cooney on the arm, motioned him outside and offered the man a home-rolled cigarette. The two men walked together, saying very little, Cooney’s long and hairy arms glistening in the moonlight. Spider had to have known on some level what was going to happen, but if he felt the urge to resist, he did not let on. Once the two men made it as far as the dry wash, George reached out with one damp and very cold fist and struck the taller man on the right temple, dropping him dead before his unshaven face landed in the dirt.

The buzzards had disemboweled Cooney before sunrise. With all the reports of Hitler and Mussolini scratching through the radios and with so much work to be done, nobody ever got around to worrying about it. After all, Spider Cooney had been a royal pain in the ass.

Thirteen other men had gone in a similar fashion as George made his way back and forth along the southern United States. By 1947, the Big War was now a thing that people knew mostly from the movies, a certain unreality taking hold of the population. As the men returned to the fields, the women returned to the kitchens and cat houses. George continued walking, screaming without sound, embracing the frost that would not go away.

It was a few days before Christmas of that year when George encountered a former infantryman. This man, who called himself Hainey, had thrown a hand grenade into a tent where his Lieutenant had been sleeping, blowing the man into several bloody chunks. The War Department had decided that since this Corporal Hainey had previously been responsible for capturing twenty-seven Japanese saboteurs, that the Lieutenant might be expendable. Still, they did feel the need to dishonorably discharge this Hainey character. And so the soldier had walked the streets of his native Phoenix, always in full uniform, blathering incoherently to any and all. What the military had not known–and would not have cared much had they known–was that the dead Lieutenant had been Corporal Hainey’s best friend. Even with that piece of information, the mystery of the Lieutenant’s murder would have remained just that, a mystery, one that not even Hainey himself could have solved. All he knew for certain was that he walked around outside with a terrible chill that he could not disgorge, no matter what the heat of the sun and sidewalks.

George met Hainey while the two men loitered outside a Salvation Army camp where volunteers gave out free cups of coffee and one cold donut to all takers. It had required all of Hainey’s mental inertia to approach George, to greet him with a semblance of a smile, to actually form the words “Good morning, sir.” Something about the other man’s blankness had registered with the Corporal. Speaking to him had been akin to smiling into a mirror. When George responded with a curled lip and a mock salute, Hainey had laughed. He had laughed simply because of a lack of preparedness for such a reaction. People tended to shy away from Hainey.

The Corporal recognized this reluctance in others. So when he chose to speak to someone–rare as those occasions were–people invariably responded “Good morning” right back, an uneasy smile holding their faces in place as their eyes looked for somewhere else for their feet to be. No one had ever sneered and mocked him. So he had laughed.

George balled up a fist and smashed Hainey across the temple. The force of the blow rocked the soldier back on his heels, but he did not go down. Instead, he recovered his vision just as George was readying himself for a second fierce blow. Hainey drew a pistol from inside his jacket, jammed it in George’s belly, and shot the shorter man dead.

He accepted the coffee and donut from the terrified Salvation Army volunteer.

Two days later Hainey tried to turn himself into the police in Phoenix. No one had time to expend on a shell-shocked psychopath. The police were far too busy piecing together the remains of the mystery of the fourteen men murdered over a nine year period by a drifter named George. The police investigators were working around the clock to determine what link, if any, existed between the fourteen dead men and this recently deceased George person.

The Maricopa County Coroner stated in his report that, in addition to the fatal gunshot wound, George had been suffering from an inexplicable case of hypothermia, a condition most unusual in the desert southwest.

Phil Mershon is a writer and web designer from Phoenix, presently living in Alderson, West Virginia. His writings have appeared in Training & Development, Perfect Sound Forever and elsewhere.. He knows how to have a good time.