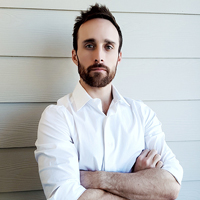 Before the words run out.

My name is—No, scratch that. People call me Pete. I have a daughter and a son and a dog named Panther. He’s a black lab rescued from a shelter. Three legs. That’s all his previous owner left him. Three legs to hobble around on. Three legs to run and play and show more affection than his two-legged owners showed him.

In addition to my son and my daughter and my dog, I have a wife. A beautiful, charming wife who kisses me goodnight and pours me a cup of coffee every morning. She’s my north star. Someone once phrased it as “navigational mainstay.” I prefer that. My wife’s name is Rebecca. And she’s my navigational mainstay.

People say life has no meaning. Nonsense. It’s whatever I can make two thousand and eighty-seven words mean.

Four months ago, I went to the doctor. They say check for lumps. Watch out for chest pain, headaches. Err on the side of caution. But my visits were routine. Until they said it was terminal. Until they said I had a year to live.

An entire life reduced to a single sentence.

“By our estimations, Mr. Monroe, you only have a year.”

A year until I die. A year to live large enough as not to feel cheated by death. One year. Three hundred days and only two months more than that. Two thousand and eighty-seven words.

“Is that without treatment?” I asked.

The feeling in my hands faded. Arms, cool to the touch. The skin on my neck felt hot. Nevertheless, I was cold, my vision blurred and darkening. As though my body were preparing me for what was to come: the darkness and the cold.

One thousand and six hundred and ninety-nine.

I returned home, expecting the paint on the walls and the color of our living room sofa to be dulled, diminished by the overwhelming sense of my known demise. Mortality. Death. However, I was pleasantly surprised when they looked the same. Everything looked the same. Perhaps life doesn’t change knowing it’s limited. Knowing when its shift is over, when to punch out. One thousand and six hundred and thirty.

Perhaps life is best suited without wasting a second thought on it. On the remainder. Just find your children and give them a hug and tell them, “I love you, Melissa. I love you, Max.” Perhaps life is best suited to find the ones you love and grab onto them and hug into them and kiss them and tell them, on repeat, that “I love you, Rebecca. More than the day I met you. And more than the day I married you. And far more than yesterday. And tomorrow I’ll love you more than today.”

“Pete,” Rebecca said, fearfully looking at me—into me—as if she had already learned the answer but needed to hear my reaffirmation. “What’s going on?”

“I have cancer,” I said as forthright as I could. Melissa and Max overheard and paused the game they were playing. The silence reminded us of what’s to come.

Nothing. Nothing. And nothing.

“Dad,” my boy said. Max’s young, innocent, and untouched voice cracked. He’s eleven, far too young to have to understand what death is and what cancer does.

Rebecca’s eyes watched mine, the bottoms welling with tears, the lines around her mouth showing just how much dread a person can hold. “Pete?” The words slipped, escaped her lips in a whisper. “Tell me you’re joking. Tell me you don’t have cancer.”

One thousand and three hundred and seventy-five.

Three months and two weeks passed to two weeks ago.

“Melissa. Max,” Rebecca called out. “Come have a seat. Daddy and I need to talk to you about something.”

Rebecca’s hair thin and fraying, dried like tinder. The creases deepened daily around her eyes. Her smiles distanced themselves from one another like stars among the eons.

I weighed thirty pounds lighter. Re-notched my belt every Monday.

Max walked over, falling onto the couch. His legs draped over the arm rest. Grabbing a pillow, he held it over his face. Melissa followed Max into the living room and sat in between me and Rebecca.

“As you know,” Rebecca braved, “Daddy isn’t getting any better. The treatment hasn’t worked and his life, from now on, will be very painful. Each day will be more painful than the previous.”

“She’s saying that Dad is going to die,” Max said. His voice fractured, breaking over the bluntness of my death.

“What Mommy is saying is that there is a procedure the doctors can perform.”

“And it’ll make the pain go away?”

“Yes, I suppose it will make the pain go away.”

“Melissa, Daddy’s life isn’t going to get any better. And he’ll spend the rest of his life—what’s left of it—in really bad pain. This procedure will shorten the amount of time he has to suffer.”

“What does she mean, Daddy?”

“She means,” Max said, rising from the couch, eyes red from rubbing them dry, “that Dad is choosing to die.”

One thousand and sixty-two.

On the way home from getting ice cream: One thousand and fifty.

But who’s going to teach me to shave?

Who’s going to show me what a good man is?

Yeah, Dad, who’s going to show Melissa what a man worth loving looks and acts like?

Who’s going to show me how to throw a curveball, Daddy?

Who’s going to show me how to chop wood or change a tire or throw a good punch?

How will I ever learn how to drink whiskey, Dad?

I’ll miss when we play dress up.

I’ll miss you making me smile.

I’ll miss you making me laugh.

All the movies we won’t be able to see together, Daddy. All the books I’ll have to read to myself.

I was born in Salem, raised in Salem, my memories are of Salem, and, now, I’ll die in Salem. Life is measured by firsts: the first step you take, the first tooth you lose, the first day of school, your first friend, first crush, first kiss, first love. Now, my life is measured by lasts. It gets that simple. Seven hundred and ninety-one. This is the last car ride with my children. I said goodbye to Panther. One last time. He made his way over to the door—all three legs working hard, making up for the one he lost—and licked my hand and my face, my tears, as I knelt to hug the good boy one last time.

Soon, I’ll hug my children one last time. Tell them I love them one last time. Kiss my wife one last time. And take one last look at those I’ll leave behind before taking one last breath. One last heartbeat, one last thought before the world fades to black. And my family will leave that room. Leave my body behind. Six hundred and sixty-six. Nurses will throw a sheet atop me, covering my face, plunging me into the dark. Others will bag up my body and carry me until they can lower me down. Into the ground. A funeral. A good week for tissue sales. Long nights for those who loved me. Long lives for those who were closest to me. Rooms will feel empty. Conversations absent. All because—five hundred and ninety-seven—in life we lose.

But not at the same time.

Never at the same time.

The building is sterile and clinical, haunting. Even the exterior—no, when words are running low, don’t waste time on describing a building. Five hundred and fifty-one.

We enter the room. A bed and some chairs. A nurse with a resigned smile and a doctor to administer the “medication.”

I have a seat and the doctor explains the procedure. Cognizant of the children. The innocence they’re about to lose as they see life exit their father. Five hundred.

Once the doctor leaves, Max walks over to me so we can say goodbye. Four hundred and eighty-two. He’s trying hard not to cry. Being what he thinks a man would be. Because he thinks he needs to be the man now.

He hugs me. He squeezes me so tightly that pain forks, fractalling like lightning through my body. But he needs this hug. This hug may last him, carry him through trying times. My pain is about to be over.

That’s being a man, Max.

And, that’s being a woman, Melissa.

My little girl, my little baby, only seven years old, sits in the chair in the corner with her arms laid across her chest as tears crawl down her cheeks.

Melissa wipes the tear streaks away—or tries. She stands and walks, now aware. While she approaches, I tell her I love her and will miss her. In these seven words, her shoulders curl inward. Her posture falls. She’s broken. But she runs toward me. One last time, toward her father.

“Don’t go,” she says, sobbing into the stomach of my jacket. Her voice beaten, defeated, shattered into infinite pieces of what it used to be. The softness gone. Her sweetness soured. Her voice shrill, harsh, as hostile and severe as the misfortune that’s befallen our family.  “I don’t want to say goodbye, Daddy. Daddy, choose not to die. Say no. Tell them no. I need you. I love you.”

I tighten my hug.

“Daddy, was I not enough for you? Was I not nice enough to you? Have I not been a good girl?”

May I have more than the remaining one hundred and sixty-nine words? I know it’s how it works, but may I please have more?

“Melissa,” Rebecca rubs her right hand over the part of our daughter’s back uncovered, unhugged by my arms. One hundred and thirty-four. Her other hand holding mine holding our child.

“Melissa, we talked about this.”

Rebecca dabs at her eyes.

“We talked about how there wasn’t a good decision to make. Just one better than the rest. Daddy is in pain. He will be in pain until the cancer gets him. It isn’t fair to make him—”

They inject the contents of the syringe.

Trevor Love lives and works in Charlotte, North Carolina with his dog named Rooster and his wife not named Rooster. His debut novel is titled Will You Marry Me, Brittany Rose? Find more of his short stories, poetry, and other oddities by visiting trevorlove.com.