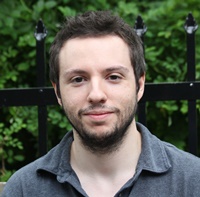 The thing I remember most about that day was the squishy star tube. The way it moved all slippery in my hand and how those colorful plastic stars inside just sort of floated all suspended-like in whatever that fluid was. Maybe they stopped selling them in toy stores in the nineties because kids could easily pop them open and drink the liquid. And who knows what the hell that would do to a kid.
My dad took us to the mall and let us roam around the toy store while he waited outside for someone. He kept checking his pager, clipping and unclipping it from his belt. He wore a short-sleeved white T-shirt tucked into his jeans. He always folded up the sleeves to show off his arms.

My little brother Birdie was looking at stuffed animals. He sat in the corner with a turtle in one hand and a dog in the other making them talk. I kept palming the squishy star tube, squeezing it so that one end would get bigger and bulge through my fingers.

My dad was supposed to be watching us, but I was the one doing the watching. I wondered how hard I’d have to squeeze the thing for it to burst and spill the liquid and stars everywhere. Then my dad would have to come in and pay for the toy and act like a responsible parent.

“Jacob, come out here,” Dad said to me. He was greeting an approaching woman.
“Wait,” I said. “I’m looking at something.”
“Get your brother and come out here. I want you to meet someone.”

The woman was taller and younger than my mom and had blonde hair. She wore tight denim shorts that showed off her legs. Her sneakers were pristine white, with laces looped like big bunny ears.

I grabbed my brother by the shirt. “Let’s go,” I said. He was on the verge of tears. “Let’s just go meet this lady. Maybe Daddy will buy those for you, okay? Don’t cry now.”

I didn’t realize I was still holding the squishy star tube. Nearly walked out with it. I tossed it back in the bin. It bobbled and bounced as it landed on its squishy brothers and sisters. Some were filled with dolphins or dinosaurs. I really wanted the star one though.

“Kids, this is Laura,” Dad said. We both just looked at her.
“Daddy, can we go home? Birdie’s not feeling good.”
“Come on. Don’t be a baby,” he said, running his big crusty hand through Birdie’s curls.
“Laura’s on her break. She wants to get pizza with us. You guys want pizza?” He knew we were hungry, having not fed us since he picked us up hours ago.

I knelt down and whispered in Birdie’s ear. “Let’s just eat the pizza fast. Then there won’t be anything else to do. I’ll tell Mommy to come back here to get the turtle and dog for you, okay?”
That kept the tears away. I was also hoping to go back for that squishy star tube. Sometimes you have to distract yourself with hopeful thoughts so you don’t pay attention to the awful things adults are doing.

After the pizza, Dad agreed to take us back, but first he had to give Laura a quick ride in his pickup truck.

We rode around a while all squeezed together. Good thing I had the window. I just looked out and counted the trees.

When he dropped her off, they both got out of the car. He had parked so that we couldn’t really see them saying goodbye to each other. But I could still kinda see what they were doing by looking in the mirrors. They kissed. Then, as he walked back, he checked his pager again, got back in the car, and finally took us home.

At the front door, my dad kissed our cheeks, and we ran inside. He handed my mom an envelope.
“This is only two months worth, Ray. You owe at least six. You see how we’re livin’ here.”
“Listen, Jo. I don’t have it right now.”
“You better not be late next week. Did you feed them at least?”
“Pizza.”
“Bye, Ray.”
Mom gave us hugs and kisses. She asked if we had fun. We both said yes.
“And we met a lady,” Birdie said.
“A lady?” My mom stood up. Her mood changed. She looked out the vertical blinds to see if Dad left yet.
“What lady?” She turned to me.
“I don’t know,” I said.

She ran to the telephone on the wall. I heard the numbers go beep, boop, boop, beep. She started screaming and crying and saying all kinds of angry words. That night Mom locked her bedroom door and cried herself to sleep.

I didn’t find out until years later, when I was old enough to understand, that my dad had left my mom to be with that woman. I suppose in a way I did know. Birdie probably knew too. We just didn’t have the concept for it.

We saw her one other time. She appeared at our door and talked to my mom for a while. I remember watching them talk. I was on the floor playing with my brother, toys scattered everywhere on the dirty carpet. The turtle and the dog were there too. So was the squishy star tube.

Franco Amati is a writer from New York. He has worked as a front desk clerk, as a college instructor, and as a user interface designer for a speech recognition company. His educational background is in cognitive psychology. You can find more of his work at francoamatiwrites.com