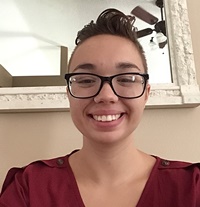 Fiona and Sally
By Cearra Hill

Fiona and Sally used to be close friends, the closest friends at Swallow High, everyone loved to be around them. They were always the life of the party and lit up any room they walked into. However, one day, the two stopped talking to each other and stopped going to the movies, shopping, and pranking together.
People had to start keeping them apart, keeping them away from each other to keep a fight or argument from breaking out. Everyone was starting to get tired of it.
One night the two of them were out sneaking around the school, setting up some pranks for the teacher, when they ended up in an empty classroom, the same one, to be exact. Both had heard a sound and ran into the closest room. The two saw each other, having chosen the same room, but neither said a word.
The custodian was going around and locking classroom doors, of rooms he had already cleaned, at the time, and locked the two of them inside the classroom. When Fiona and Sally heard the door lock they both ran to the door, trying to unlock it. The custodian had left that specific hallway. The two sank to the floor, still not having said a single word to each other.
“Well, this sucks,” Fiona muttered to herself.
Sally laughed out a bitter and resentful laugh. “No duh,” she remarked.
“What do you think we should do?” Fiona sighed, ignoring the harsh tone of her former friend.
“I think you should just leave me alone and we get out of here on our own. Sound fair? Good,” Sally replied, venom in her voice.
“What did I do that pissed you off so much?” Fiona finally asked.
“You know what you did. And I cannot believe you actually did that, ten years of friendship, down the drain,” Sally replied in a sneer.
“If I knew what I did, I wouldn’t be asking, and would be just as rude and snarky as you have been,” Fiona replied, clearly confused, but starting to get a bit upset and angry.
“You know what you did. You just want me to think that you don’t, so I look like the bad guy here,” Sally said, crossing her arms.
“If you want to hate me, fine, but at least give me a reason for this hatred. We have been friends for ten years, I don’t even know what changed or why it changed,” Fiona replied.
“Don’t start yelling at me for something you did wrong,” Sally said, getting to her feet.
Fiona followed and got to her feet as well, she had never liked it when people were towering over her.
“You still don’t like people towering over you, huh?” Sally asked Fiona.
“No, I do not. And you know why I don’t,” Fiona replied, a cold look in her eye. She was fed up with having this argument and not knowing what it was about, “If you are going to hate me for no reason, at least let me give you one,” she said, then she walked over to Sally and backhanded her across the face.
Sally’s head jerked to the side violently at the force of the backhand. She shot Fiona a murderous look, “You are going to regret that,” she said, launching herself at her former friend. Sally tackled Fiona to the ground, all of her anger finally coming to head.
Fiona punched her off and quickly got up. “At least you have a legit reason to hate me now, I don’t even know the reason you have in your head,” she said, putting her hands up to be prepared.
“You know what you did. Stop denying it,” Sally retorted. She was getting upset that Fiona was still trying this stupid game.
Fiona fumed and punched her former friend in the stomach, knocking the wind out of Sally. Fiona let Sally recover since Fiona still actually wanted to be friends, even if she was the one that started the fight.
Sally ran at Fiona and tackled her into the whiteboard behind her, “You shouldn’t have slept with Evan,” Sally said through gritted teeth, as Fiona hit the whiteboard.
Fiona’s head hit the metal tray that holds the markers, causing her to fall to the ground. The metal piece broke and a shard of it embedded itself in Fiona’s skull.
Blood pooled around Fiona’s head at a rapid rate, the metallic smell of blood filled the air. Sally looking at her in horror and guilt. “I never slept with anyone, Sally; however, I forgive you,” Fiona rasped out, then all sounds from Fiona stopped.
Cearra Hill is a college student at Full Sail University, where she is part of their Bachelor’s in Creative Writing program. There she studies how to use today’s technology, how to properly write a conversation in a story, and so much more to come. Cearra has graduated high school in 2019, with a 3.42 GPA. Cearra is also a black belt in TaeKwonDo, and plans to study more. When she isn’t writing or reading, she is either drawing, painting, or playing her guitar. She loves spending time with her six other siblings and her several dogs and looks forward to what her future has in store for her.