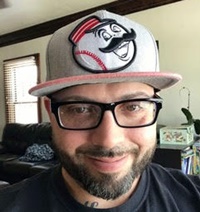 The Stopper
by Aaron Israel

It was early. Waves were slapping the shore. Dawns rays were peeking above the dark waters. A gray sunrise like that would never make the papers. I thought it was beautiful. The beachcombers said anything worth finding had to be found early. Up until this point, I could brag about a few large fragments of sea-glass in my collection. I was a night owl, so mornings were usually a no-go. I had to join that stupid Finders page. The hobby that was supposed to release stress now caused it abundantly. Why do I always do this to myself? Anxiety isn’t real, right? Decanter stoppers made out of crystal blazed across the local sea-glass finders webpage. Discoveries like that never happened for me. In the scenario where the bird gets the worm, everybody forgets the worm was up early too. Until a teal speck twinkled only once just between my toes. Most glass was clear, brown, or green. I reached down and started to pull it loose. This was no speck. Time slowed down as the sand gave way. It felt cool to the touch. Warm sensations rippled like waves through my body. I clutched it in my shaky hand. Please be a stopper. Please be a stopper. Please be a stopper, Yes! Scavengers relished their great finds and still… How could they not? Mine is ten times better! My well-worn and creased failures stacked away in a corner. It’s in my nature.
Rays of light flicker a kaleidoscope of diamond patterns across the sand, I raise my hand higher still, my protector from the sun. The waves crash against my feet, I am lost to the world.
Come back. I could hear the Sirens call from within, luring sailors and sea-glass hunters alike to their fate. They called out for the stopper. Who was I to take what’s rightfully theirs? Would they stop at nothing?
Warning sirens from near and far grew louder and I was snapped back to reality. Higher than a two-story building, a tidal wave monstrously building momentum raced towards me. As it surged closer to the shoreline a sailboat in its path was destroyed. Within seconds it would be everywhere. I took off at full speed for the parking lot, the stopper bouncing recklessly in my cargo short’s pocket. I slowed down just long enough to fully snap the pocket shut. I would have passed Usain Bolt had he raced me; each stride ever closer to my parked car. A memory flashed of a frightened boy, hidden under his desk with a book over his head. The constant buzzing of instructions between intermittent alarms. That. Same. Sound. The car door latched shut just in time. I screamed when the colossal wave crashed against my Honda. My scream as useless as the desk.
My heart raced. The surge lifted the car and then flipped it on its side deep into a muck-sand mix. I could hear debris scratch and dent the metal as water rushed past. I closed my eyes and prayed for safety. The water retreated nearly as quickly as it had come. The car is buried in sand, just like sea-glass. Would I be an object on some future Finders page, a mere item of someone’s casual interest? An ancient artifact. My heart thumped louder than ever.
The rescue helicopter located a speck in the sand; that was how they put it. They pulled me out with the Jaws of Life after about a half an hour. I stood with a blanket wrapped around me as the rescue equipment pulled the car out of the dune. I watched it along with the crew from atop the hole. I walked back to the shoreline. The water was smooth like glass, seagulls were in various stages of flight, the horizon fresh with color. I pulled out the stopper and I cocked back my arm, but my body froze. I took a deep breath and let it all sink in. I lowered my arm and dropped the stopper back into my pocket.

BIOGRAPHY
Aaron Israel resides in Racine, WI. He enjoys creating art in its many forms. His family is his inspiration.