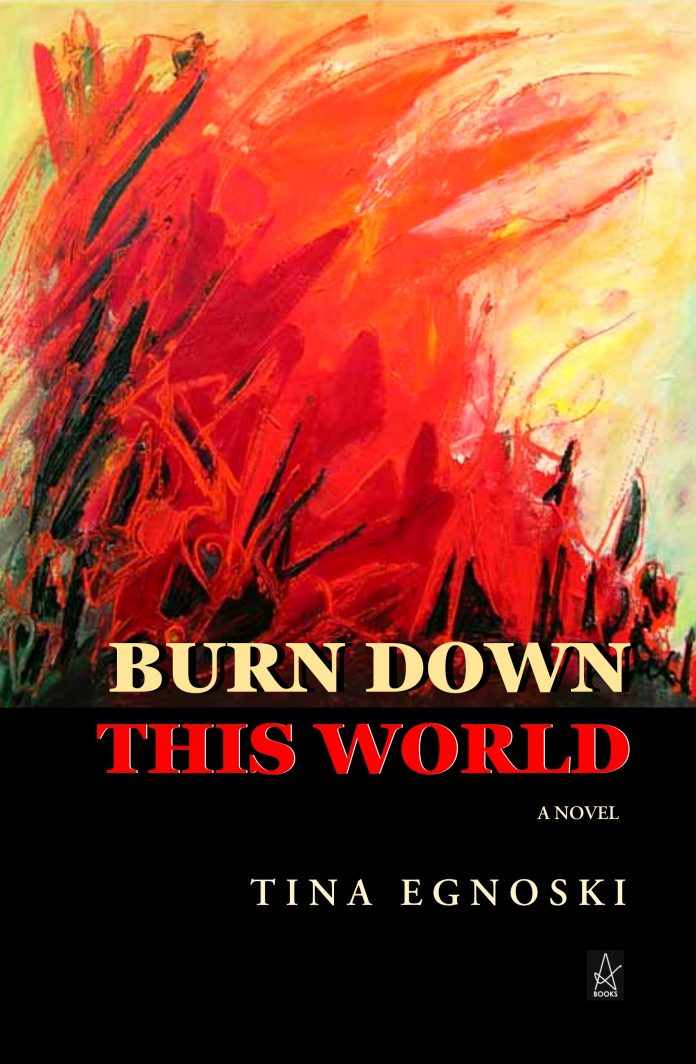 Tina Egnoski
Burn Down This World

1. Tell us a bit about yourself – something that we will not find in the official author’s bio?

I began writing at a young age. When I was in my teens, I wrote very, very, very bad love poetry. In high school, I appeared to be industriously taking notes while my teachers’ lectured, but really I was writing poetry. Everyone assumed I was a diligent student, but in reality I was a daydreamer, more interested in the language and structure of poetry than history or algebra or biology.

2. Do you remember what your first story (article, essay, or poem) was about and when you
wrote it?

The first story I wrote was based on a picture of my mother taken during the mid-1940s. She was nineteen and dating my father. When he went overseas to fight in WWII, she sent him this picture. He carried it with him during his three years in China. I found it in an old photo album and my mother told me its history. In the story, the picture, as it travels from the United States to the other side of the world, is at the emotional heart of the story.

Burn Down This World is my first novel. It centers on Celeste and Reid Leahy, siblings raised in a military family who come-of-age in the South in the late 1960s, at the height of social change and national unrest over the Vietnam War. As students at the University of Florida, they’re active in antiwar demonstrations. Those activities, which begin as peaceful and soon turn violent, eventually tear the sister and brother apart. The braided narrative tells the story of their history, as well as their reunion after years of estrangement.

The events of the novel were inspired by real demonstrations that took place at the University of Florida in May of 1972. I’m an alumna of the university, although I didn’t attend during the time of the protests. Still, when I decided to write about student activism against the Vietnam War, it was a happy accident to discover this connection. It gave me a setting and a set of facts as a jumping-off point.

It took me four years to write Burn Down This World. I began my research in 2014 at the University of Florida archives. I spent three days reading student newspapers, yearbooks, the University Record, the catalog of courses, and presidential letters. I wanted to get a feel for both the academic and social life on campus at that time. When I returned home, I spent weeks sifting through all the notes and copies I made in order to synthesize the material. I had to let the facts sink in so that my imagination could take over. Slowly, I began creating characters and developing a narrative structure.

When I begin a new project, I give myself a set number of words to write each day. For instance, in the first month I’ll write, say, 1000 words five days a week. Then, the next month I increase the number of words I have to reach each day. By the third month, I’ll be able to write 2000 words a day. Those words aren’t always “good” words, but they are at least words on the page and they’re building the story. This is how the first draft gets done. When it’s time to revise, I mark my progress not by word count, but by the number of hours I work each day, usually only two to three hours. Revision is tough work for me. I can become obsessed with getting each word in a sentence just right. I often have to say to myself: “Okay, you’ve revised that sentence twenty times. Move on!”

I write with loud music on in my studio. Typically, the music relates to the time period I’m writing about. When I was working on Burn Down This World, I listened to groups from the late 1960s and early 1970s: The Doors, Buffalo Springfield, The Rolling Stones, Black Sabbath, and Creedence Clearwater Revival. It was fun and inspiring to be immersed in the sounds of that era.

I’m a papermaker and bookbinder. I work with various plant fibers to make unique and lovely pieces of paper. Then I use that paper to design and create one-of-a-kind journals and notebooks. It’s a creative expression very different from writing, but the two are complementary. I often joke that I can write the book, make the paper for the book to be printed on, and then bind the book for publication. Of course, modern printing is much faster. It would probably take me a year to produce just one copy of my novel!

There are number of writers who have influenced my writing. In terms of classics, I love James Baldwin, the Brontë sisters, Zora Neale Hurston, Fitzgerald, Flaubert, Toni Morrison, and Edith Wharton. I also write short stories, so I admired short fiction writers like John Cheever, Lauren Groff, Flannery O’Conner, and Alice Monroe.

The one book I re-read every few years is Erica Jong’s Fear of Flying. The reason I love that book so much is because it was one of the first books I read that spoke frankly and from a feminist point of view about love, sex, family, family dysfunction, politics, psychotherapy, literature, and religion. In other words—it has it all!

I’m working on a collection of short fiction. The stories are historical in nature and focused on writers who have a connection to Florida. For instance, I read recently about the poet Edna St. Vincent Millay and a trip she took to South Florida in 1936. After checking into a hotel on Sanibel Island, she walked down to the beach. Just as she hit the sand, the hotel caught fire. She lost the only copy of a manuscript she was working on. She was able to rewrite the manuscript from memory and the book, Conversation at Midnight, was published in 1937. That’s the kind of fact I love to turn into fiction.

When I’m writing, I think about my readers in an abstract way—I want to give them a good story told with evocative language and a strong sense of place. If I can accomplish that, I feel the work will be accessible to anyone.

Read, read, read. I think reading and writing go hand-in-hand. While in graduate school, I learned about my strengths and weakness as a writer from teachers and fellow students. Since then, I’ve continued my literary education by reading: the classics, as well as contemporary fiction. I read The Best American Short Stories cover-to-cover each year. When I read a story, I read it first for the joy and discovery. The second time I read it with an analytical eye, trying to figure out how the author uses elements like point-of-view, tense, plot, and character development.

Perfection kills creativity. It’s been said many times, many ways, and it’s true. I have to battle perfectionism with every piece I write. I’ve also had to learn when to let go and send out a story. No creative endeavor is ever going to be perfect. When I deem it “good enough”—and that’s a tricky judgement call—I let it go by submitting it to a journal or press.

I just finished The Snakes by Sadie Jones and The Most Fun We Ever Had by Claire Lombardo. Two of the best books I read in 2019. Both are well-written, engaging, with meaty family dysfunction at the center. And what’s better in fiction than a messy family saga?

As I mentioned earlier, I want to tell a good story, a story that brings a character or characters into sharp relief. Along with a good story, I strive to evoke a strong sense of place with writing that is, hopefully, beautiful and precise. I’m not saying I always accomplish this feat, but I try.

The publishing industry is alive and well. I think the abundance of independent publishers gives writers of all genres an opportunity to get their work out there. Typically, independent presses are more hands-on. They also allow the author more say in the publishing process. It’s important for writers, once they have a book in their hands, to advocate for that book; to organize and attend readings, to create writing communities; to support of independent bookstores; and to show up on social media. Even though most writers are introverts—I sure am—I’ve learned that hiding isn’t in the best interest of an author. Getting out there and meeting writers and readers will strengthen your connections, if not your sales.