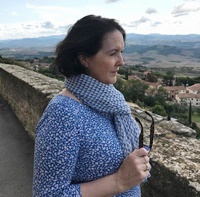 Belgium based writer Sheila Kinsella’s short stories draw inspiration from her Irish upbringing. An avid watcher of people’s behaviour, and blessed with abundant natural curiosity, she lures the reader into a shrewdly observed world via imagery and comedy. Her work has been featured in The Blue Nib Literary Magazine and The Brussels Writers’ Circle Anthology ‘The Circle19.’ Sheila graduated with an MA in Creative Writing (Distance Learning) from Lancaster University in the United Kingdom in 2017.