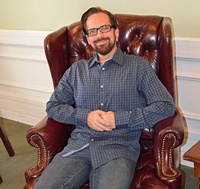 Killing it, Cooking It

Friday night the second month of high school—
but we weren’t thinking about school.
It stole hours that we used to spend skating.
All summer, every day, all day we were rolling.
Curfew didn’t lift until 5, so we’d spend the night
watching skate videos and drinking generic cola
and peeling crayons to melt with candles and cool
into wax for our coming excursion. No skate parks
then within skating distance for fifteen-year olds—
we were proud street skaters, and the best ledges
in my so, so flat section of the plate-shaped state
of Minnesota adorned storefronts, schools or offices.
Stores were quick to threaten the police when customers
streamed by, but before the opening peon slagged in
it was fair game aside from the occasional meandering
security guard or bored patrol cop. Guards
were a laughing chase, cops were a somber sit.
Schools and offices were for store hours—we had plans.
Skate spots arranged in our heads for specifics:
geography, estimated energy levels, just because
that one curved ledge is fun for an hour. 4 a.m., highly
caffeinated, with wax slowly hardening in coke cans we’d
beheaded by steak knife, we creaked out the back
and skated the stolen fence pole we propped on a dolly
to replicate a real handrail in my darkened driveway,
whispering and laughing at warm-up bails. By four-
fifteen the neighbor’s window was calling for quiet.
We acquiesced, and one skate video later we risked
the remaining fifteen minutes of curfew. The sun
yawned on the chilled horizon, our breath still pluming
from night’s chill and at least ten miles had flown beneath
our wheels when our energy crash lead to
actual crashes and laughs and a few bruises
and scratches. We’d cooked it. Stores wouldn’t open
before we slowly rolled our way back to my house
and plop fully dressed onto the couches and cots
we’d arranged in the den and promised my mom
we would be in by midnight—at the latest.

I read while walking to work,
skipping iambs off pavement
like morsels of volcanic black
bitten to bits by gnashing steel teeth.

The sky, well, the sky was bright white
lined grey by small sets of symbols.
Trees and bushes and airplanes too
scroll themselves in this cipher.

When rain came from god-knows-where,
I sheltered the hard rectangle under
the safety of a soft cotton tee. Library
frowns and fines for furloughs to fluid,

pages waved in swells of amniotic reminiscence.
Is it my place to keep these leaves
from nostalgia? Way station between tree seed
and prosody, where pulp sperm mingled

in that mellifluous marvel: the cream
of tree sandwiched between solid states.
Who am I, beside a name and date
on manila card stock glued to inside cover

where words bleed from lines, congeal,
and I wait with bated sight for the sun’s
synesthesia or the rain’s tinny
feet to walk me the last three blocks.

Unbuttoned and sweetened,
adults porched up beneath
the tiny screams of the bug zapper
as the brothers walked toward cattails
by the dock to talk and not punch—though
they did punch, with enthusiasm,
concealed by darkness and distance.

The aunts and remaining uncle
laughed, sipped piney gin and tonics
from red plastic cups and I learned
why we knock icicles off the horse barn—
salty roof slats—through a comic
memory of Dad seeing the silhouette
of his first foal moments after it mimed
giraffe for the saltcicle, bit
and loosed a neighbor stalactite
into its eye. Its fantastic outline foiled
by the sharp refraction of horse-scream.
The childish echo—their farmhome
and death so distant from our porch,
the whole safe world I’d known,
that this was told a joke.

The cruise ship isn’t far enough off
for the raucousness to drown in the ocean
of space that separates me from it,
standing bare foot on the drying concrete
of the beach at wave’s edge,
where the ocean’s colander
moves grains one at a time, south.
In college I learned that the Baja
appendage hanging phallic from California
was once Rocky Mountain silt,
McKinley rock that was panned
all the way down the Pacific coast
by the current like snowbirds.
James had written a poem about marks
in the sand along an Alaskan river
from his childhood, and I hadn’t liked it.
I still don’t, and I can’t decide
what that says about me, two years
after he tried trepanning with his pistol.
But James came to mind as I strayed
from the hard-drinking party boat
he’d have called me a bitch for leaving,
but it isn’t the shitty details of
his drinking stories I am likely to forget—
puking blood, cold tremor detox,
those phrases are always present
when I think of him—and it isn’t
even the poem I didn’t like or
the bloody right hand inside joke
that’s become a joke to one
and has effectively lost its laughter.
The waves try to whisper their logic
as they cusp at my toe tips,
but I only speak English, and the
Cabo culture doesn’t allow you to
play telephone with the current for long
before a Fun Search Party strumbles up
the beach, cast from the ship for me,
standing on sand that may’ve been
a cliff to John Muir, a tripod
weight for Ansel Adams, grit between
the toes of my friend.

You said onions made you cry, and
to think of the plight of roots in the city.
Toes clenching frayed bottom
of the zarape blanket we wore
like an onion skin against night.
Breath tasting of the spaghetti I’d made.

A tea light melted its plastic
and bled red wax across the tablecloth
to create a lava pile on the taupe carpet
as I let my fingertips rustle
just the micro-fine hair on your cheek,
invisible to the non-focused eye.

But when you said you cried for onions
you laughed. Rotated to your hip and fit
onto my angled body like a chain link.
The carpet had dried and the wick long-starved of flame
as we watched headlights animate blind slats
and spoke of other trapped inanimate objects,
and laughed, and felt gravity lift
from our bodies and only stayed
on the futon from the force of ourselves.

Zebulon Huset is a teacher, writer and photographer living in San Diego. His writing has recently appeared in Meridian, The Southern Review, Louisville Review, Fence, Rosebud, Atlanta Review and Texas Review among others. He publishes a writing prompt blog Notebooking Daily and is the editor of the journal Coastal Shelf.