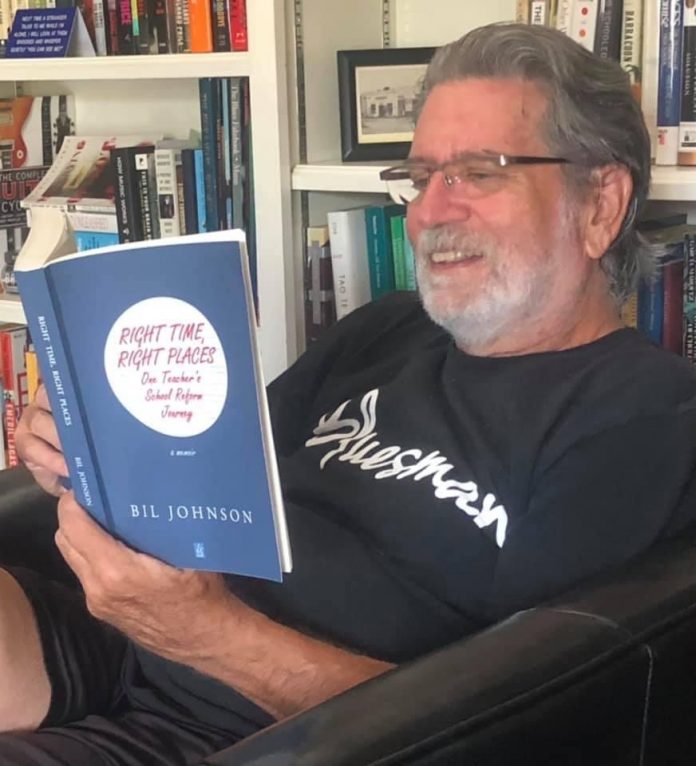 Something that doesn’t appear in the “official author’s bio” is my lifelong love of the cinema.  George Pratt’s history of silent film, Spellbound in Darkness, captured my sense of watching movies.  In particular, I love film noir — which was probably influenced by my spending a week at Yale sitting next to Fritz Lang, as he showed all his movies and discussed the process of creating great cinema. I also love documentaries — particularly about history and music.   I’d have to say  music has also had a great impact on my life since the early 1960s.

I started writing reams of poetry in high school — and continued through college (it has now translated into writing songs on the piano and guitar).  I also wrote a play toward the end of high school.  I don’t remember, specifically, what the first one was but I know I spent lots of time imitating Frost and the Beats.  There’s also a 415 page novel sitting in a file drawer in our home office — it was written as I was turning 30 in 1979.

Right Time, Right Places: One Teacher’s School Reform Journey.  It is the story of my career as an educator trying to reform the public school system.

The “bones” of it  kind of poured out over a two-month period and then it took another month or two to shape it into a readable book.  It started as a daily blog post in February 2019 and continued through April 2019 — that’s where the raw material was created.  When I’m writing regularly I usually write between 1500 and 2500 words a day.

Since about 2015 my outlet for writing has been my blog (The BLAST) which is featured on my website (www.biljohnson.com ).  The website is called “Leave the Gun, Take the Cannoli,” which is my favorite quote from the first Godfather movie.  As far as writing goes, I’ll get an idea (a “brain burst”) and basically do some initial “composing” in my mind before sitting down and writing.  I’ll write and re-write at the keyboard, often re-reading and editing as I go.  That’s my “process,” I guess, and I enjoy it quite a bit.  My wife, the Lovely Carol Marie Bjork, describes the process as an “explosion” of an idea followed by a “compulsion” to share it (in writing or music).

As I mentioned earlier, I do a lot of songwriting — mostly on guitar, a little bit on piano (some of the songs are featured on my website) . . . they’re kind of “ditties.”  I also like to sketch and watercolor.  I took some graphic/cartooning classes and watercolor workshops — and a blues guitar workshop — at the 92nd Street Y in NYC before Covid shut everything down.  I have several graphic stories I wrote and sketched.

Wow — that’s a long and variegated list.  Off the top of my head I’d say Hemingway, Faulkner, Ellison, Hunter Thompson, T.S. Eliot, Sam Shepard, Ferlinghetti & Corso & Frost, Joseph Conrad, Garcia Marquez, and Richard Price.  Also: Bob Dylan, Neil Young, Joni Mitchell, and Bruce Springsteen been an important influence on how I think about writing. Regarding education, James Herndon’s How to Survive in Your Native Land had the greatest and longest-lasting impact on me (and that’s related in the Memoir).

I’ve been going through my blogs and putting together a collection of essays — and maybe some old short stories I wrote years ago.  The working title is: BoomeRant!  Musings on Life, Death, Baseball, and Democracy and it includes material on music, sports, politics, as well as observations about life, in general.

Not really.  I basically write for myself and hope that people find the work interesting and/or entertaining.  The blog is basically written for friends, colleagues, former students and college classmates.  I would hope anyone interested in education — and particularly in improving education in this country — would read the memoir and find it informative as well as entertaining.

I used to teach writing a lot to high school students — and, later, undergraduates and graduate students — and I always used this gruesome phrase “You have to kill your babies.”  What that meant was, people often love something they wrote — be it a phrase, a paragraph, a whole section of an essay or a story, or a scene in a play or screenplay.  As a writer you need to try to objectively look at your own work and be able to delete, excise, revise(“Kill”) that part of the writing that you love but doesn’t add value to the writing.

I don’t know how many books I read annually — it’s decreased, I think, as I’ve gotten older.  I tend to read periodicals and online writing more these days but I probably knock off a book or two or three a month if I think about it.  I’m partial to police procedurals these days — Richard Price is the best (real literature) but Michael Connelly is very entertaining, as is George Pelecanos and Walter Moseley.  Maybe the police thing fits in with my love of film noir?

I hope readers can “hear my voice” and hear the passion I have for whatever I’m writing about because if I didn’t care about it, I wouldn’t be writing.

The publishing industry today seems to be in flux.  Books — real books, paper-in-hand books — seem to be losing ground to online/Kindle books, so that’s a big shift obviously.  I think, as with so much else in our culture, Oprah and Reese, with their “book clubs,” can determine what millions buy (if not read), which is too bad.  I think social media and the internet in general has shortened attention spans and created an even greater “instant gratification” world which is dominated by YouTube, podcasts, and quick-hits (like TikTok), to the detriment of publishing and reading in general.