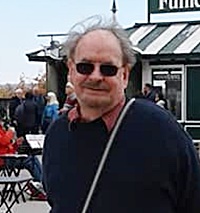 You disconcert me at times, silent at the door,

As in the morning breeze your long tresses flutter,

Eyes downcast as if you were about to confess

A sin so terrible that it can’t be uttered.

I am neither your confessor, nor confidant,

Though you have burdened me with those long histories

Now piled on my bookshelves or stored in boxes:

So many, it would take all my life to describe.

I would rather have Thalia come sleep in my bed,

Or Terpsichore lead me on polished dancefloors.

There are other men, surely, who’d gladly serve you

With pen and ink, making books thick with splendid words.

But you, Erato, have claimed me, decked this chamber

With wreaths of myrtle, seduced doves to carol us.

And so, I will rise and learn the arts of love with you,

Making each minute an æon in paradise.

Waiting for rain, forecast with a cold depression

That should pummel its way even to Queensland,

Promising to bury us in snow-bound solitudes,

Each house on the street shuttered and still by day,

Before the black clouds sweep in from the Otways

To the beat of wind across the plains.

A friend, doctoring in the north suburbs, gravely ill,

We all have coughs, wet and dry, we’re tired.

They say only three more weeks til we can relax

At the University café, to discuss

Our lives, but even then, we will be diminished.

Talk will turn to the past, rather than the clouds

Rolling from the cold seas, and of dreams,

To sit still on shoulders, whispering.

Mortar as tough as the ridges from which stone was cut,

They had erected this chapel, brick over blue boulder,

As much in memory of their motherland’s bleak aspect,

Wind scudding across northern seas, as for themselves

Found lumbering into the vast weald of the interior,

Only to come to a point where nothing useful grew,

Turning back to cling to the unforgiving borders

For surety and comfort: basalt then their godhouse,

Black oak for beams to hold a shingled roof against the sky,

Windows lanced to allow a faint glimmering to trickle in

From an upside-down Moon and scattering of alien stars,

When all they really had was their innermost light,

Some half-remembered prayers and dog-eared hymnals

To guide them and theirs through the coming years.

Priestless by choice, though taking in a few wanderers

Who could read and offer an explanation of the Book,

Keep a register of marriages, births, baptisms and funerals,

Maybe marry into the community before moving on,

Who kept themselves as cobblers and saddlers, taught

At the township’s school or helped out in the morgue.

One of them blessed my great-grandparents’ marriage,

Others buried them in the dry dustlands of the Wimmera,

Driven, in the long run, back to the coast by the drought.

How long could the congregation persist in the face of

The trials of that long War, Depression, and War again,

When all they wanted was a little space to call their own?

Peace, please give us peace, was their simple prayer,

Whilst heaven’s hounds never seemed too far away.

Yesterday, in the Mill Markets I saw a battered harmonium

Tucked away in a sunny corner, a sign, For Sale, in red,

Its pedals still worked, though it wheezed and coughed,

Quietly singing to himself, ‘Thou shalt arise, and mercy yet,

God in his glory shall appear’, stopping to forget words,

Then passing onto the next item as his granddaughter chatted.

The hymnal lay open, its black letters heavy with Knox,

As if northern cold were struggling to comprehend the light

Saturating a pewter dish as he hymned in his Springtime,

When her favours caused the golden grain to glow,

And there were children at his knee, a house of stones

Rising out of the iron soil like a temple in his verses.

Or take the priests’ words into their hearts, or sigh

When the town’s music mistress walks up to the podium

To lead the schoolchildren’s choir in a simple ballad.

We read into each other what is inscribed in our souls,

Stubborn as the black granite blocks with which we build,

Temples and chapels, to guard against Winter night,

Believing what we choose when the angels come by.