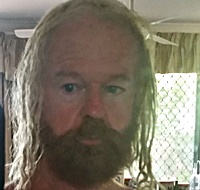 And in the glare Mu Cephei roils

As if to dare armed craft to draw near

Or to deter steel souls from rare risk

Which is the high dream I Kalki chose

So now I boost thrust hard and arc close

Becomes a vast fire pearl with no peer

Reward and long sought prize for the loyal.

And I reflect on seeing those flares

The star has caught my character’s fire

In its regalia blazing a chart

From spiral arm to galaxy heart

A racemate’s flame that burns ever higher

Throughout all space, the infinite way

Throughout all time, an infinite prayer.

The slingshot path we need, so we veer

Each fierce arch of garnet and rose

Bestowing heat as dharma and kiss

And our return to team base is brisk

While the photonic current still blows

And to all men my name is revered

The Delta K exalted and royal.

Waits for the crystal’s approach

Scarlet as garnet and old scars

Tasked to bring freedom at last

Facetted high in the night sky

Death for that threat from the stars.

Thousands of years have elapsed now

Now I return as Kalki

Sixteen and wild as a quasar

Crested with Delta and K

Galaxies flare at my first glance

Fade to a chaos of lost thought

Thought that explodes from afar.

Red as a laser to burn foes

Gaze with acclaim from the shadows

Know that all pleas are a faint cry

Know that that quartz is no rose.

Engines idling, I check the crew

Neutrino flux and the port view

And then with a wild joy I start our glide

And all my craft’s dials exalt the tide

The light a gilt blade, the sword’s hilt

Which at my command cleaves space in two.

I think of metals, the gold sea

That is the obscure supernova core

Beyond the rays’ edge, the Kalide door

As within it sets hot neutrons free.

The sky an aquamarine haze

And it is the blueshift which fires our will

Away from star blasts, the ion spill

And so we proceed on, spirits raised.

Danger passing I check the gauge

That warns of plasma, the star’s rage

Which isn’t a threat now that I Kalki

Have as a grand plan to roam carefree

To heed the storm’s course with each deed

Within my elite fleet, every stage.

Argon lasers primed, I relax and feel that thrill

Soon my beams will guide azon might to all those rocks

Agon tiffs between asteroids and regal will:

Distant suns and men beckon now, and they have learned

Praise is due to those blessed to raise the sign of K.

Frozen goals were far fragments dashed on rifts so wide

Months would pass, or more, gashing gulfs in wildness’ seas

Triumph surged as I angered fate and rode the tide.

May my other selves, Tower-far, be just as proud!

I am Prime in space, One in time, but they are kin

Sometimes great we fuse, then we split; always I win.

Vishnu’s son I wait patiently for space to clear.

Every blast a flag, topaz-hot, proclaims my gain.

Recollections pause far from me at thoughts of pain:

Praise the desire driving us to seek!

Firethorns of the last age and God, infinite Kalki.